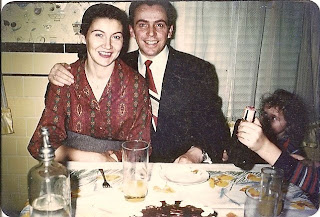 My father was an enigma of sorts, a strange combination of dandy (clothes horse, flirted with the ladies, vain as hell making my Mom livid) and standard Tyrone Power-style dude (played soccer, liked to fish, built crap all the time, never backed down from a fight).

My father (Ernest) had a hat and tie store in downtown Providence, RI, so his closet was filled with belts, hats and shoes. He had the coolest shoes: alligator, snake skin, suede, you name it. I used to open his closet and just stare at the belts hanging from the stand in his closet next to the shoe trees, not forgetting the sharkskin suits of different shades with his hats resting up above in a shelf. It was the Sixties, when men didn’t dress in sweats or leisure suits just yet. He had a great sense of style. I couldn’t wait to grow up so I could wear cool clothes like him.

Since he had a heart condition his doctor advised him to forget about the East Coast and go out west. He got a job in the aerospace industry (courtesy of President Kennedy) designing rockets and satellites. He’d come home with huge blueprint rolls so he could finish his designs after dinner.
“What are they designs of?” I asked, staring at all the strange compass-created shapes.
“Um, well, Andy, you know it’s like company things”, he hemmed and hawed, “and-well, it’s Top Secret”.
There was a Cold War going on, James Bond movies were the rage, we were sweating over UFOs, LSD and Cuba so it was all very exciting.

He moonlighted at nights selling real estate, so he occasionally had to go to empty houses at night to show the properties to prospective customers. Nothing was more frightening to me than the idea of my father in a dark, empty house waiting for strangers to come by, so I would keep him company. He always liked it when I went with him. Some of the houses didn’t even have the power turned on. It was creepy! 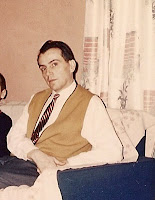 The greatest lesson my father taught me was the lesson of survival. After the Nazis had killed most of his family in Auschwitz and Dachau he built his life up again, and later back home in Hungary the Communists came and took everything away from him again. At that point he decided Europe can go fuck itself and left for America by boat, my little 6-month-old tit-suck tot frame swaddled in a blanket like Moses floating down the Nile. The example he set for me through his stubborn diligence to survival saved me through many setbacks later in life.

After my mother passed away there were times when I would walk by the living room where he slept. He slept on an old sofa bed with a wafer-thin mattress.
“Andy”, he said quietly, “my back hurts. Stand on my back”.
As he lay on his stomach I would stand on the small of his back. “Move up, higher”.
“Move to the right”.
Finally we heard a loud crack and he’d go, “Good, I feel better. Now I can sleep”.
“Now I can sleep”. He had nights where he would be haunted by memories of the concentration camps that imprisoned him, murdered his parents, his brothers (except one), and countless cousins. I could hear him cry in his sleep, it was terrible. Imagine trying not to kill spoiled brat suburban punk rockers with their swastikas a few years later. Self-control’s a bitch.

My father was actually a very happy guy in spite of the shit in his past, but I can’t get the darkness of his life out of my mind. To this day I still get nightmares where I’m in a dark, empty house with the windows open. That’s Him speaking to me, and dreams like that never go away.
Posted by Andy 7 at 6:11 AM