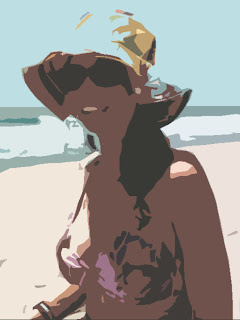 We looked for the emptiest beach we could find
It had a lagoon with cranes, pelicans, and noisy gulls
She wore a flowery hat
A tankini
And a tiny umbrella that sat by her head
The waves crashed quietly against the sky
Surfer boys and girls were running into the waves
Surfboards leashed to their suntanned ankles
Pale skinned ladies marched by
in their plus-size ross dress for less bathing suits
A gypsy family rinsed their clothes in the water
Kids splashed around
While single mothers yelled at them
Boys in bathing suits as long as skirts toddled by
Their distended stomachs like a dead bloated monkfish
I stood in the water
the waves shifting rocks
seaweed
sea shells
beer bottle caps up and down against my ankles
the sea air smelled good
when we got home we were red as lobsters
I drank some Russian vodka
took a pain killer
and passed out dreaming about the ocean

there was this band that made a name for themselves
singing about the plight of the working man and other welfare sob stories.
they once complained to people my band was taking up space
because we had no political views
and played funny songs and dressed up funny.
back then it was a bad (1978).
self-righteous phonies.
one night these working class heroes set a dumpster on fire
and pushed it down the hill in the middle of the street
a lot of people could have been killed,
people on welfare and people not on welfare.
they had to put their awful band back together again after the singer
acted in a lot of terrible movies and showed what an awful actor he was.
he has a ranch in montana.
flaming rubbish begets flaming rubbish.

It was cool being sixteen years old
And my girlfriend said,
“I’m hungry – let’s eat”
So she jumped over the backyard fence
and I waited
I heard her voice over the fence,
“well come on”
I jumped over the fence too
She stood right by her neighbor’s peach tree
She grabbed a peach and gave it to me
She grabbed herself a peach too
I bit into the peach
The juice ran all over me
She bit into her peach and stared at me
Her warm, hungry brown eyes burning into mine
This is the way it began
And this is the way it continues
Even in suburban culver city
Posted by Andy 7 at 6:51 PM