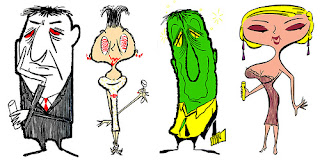 Played the Second Coming club with the stage festooned in flower petals. The petals on the floor made us slip and slide all over the stage. I had to keep the guitarists from falling on their faces and guitar necks. Later on the Lovedolls’ lead singer tried her cooch dancing routine and almost slipped and broke her neck. That’s entertainment!

The "Horses/Phantasm III" single got played in heavy rotation on KXLU. They had to pull the record off their playlist for awhile because it was getting too many requests. Cool.

Showed up at Jennifer Anus’ going away party at Al’s Bar but the fascist assholes shut the power off before we could play. The loser cunt who books the place wouldn’t let us play because she thinks I’m psychotic. Manny broke into a rad drum solo in protest. Bravo, dude.

Sold Rajis out at 10 PM. We were on the bill with V8 and Killdozer. A slam pit crammed up the floor and fist fights broke out while we were playing. When we played our encore of "One Eyed Car", Fugly the bass player in V8 tried hoisting Jack up on her skinny shoulders and he ended up crashing backwards into his amp. Fugly!

Midway through our set at the Gaslight the full-time loser/part-time sound man shut off the PA. Some bum who claimed to be part-owner of the club pulled a knife on me and told me I would never play the Gaslight again. The lads dispatched him, and we’ve played there ever since.

Lucas left the band so he could go to school in New York and live there rent free, so now Paul’s in. Paul doesn’t like anything so he’ll work out fine.

Recorded “Silver Surfer” for the Flipside compilation (the one that Offspring and Green Day also played on). When I was in mixdown with Joy Aoki and Donnell Cameron the VU needle shot into the red and sat there. Donnell fell off the stool laughing. “This is a very HOT recording!” Yeah.
Posted by Andy 7 at 2:59 PM