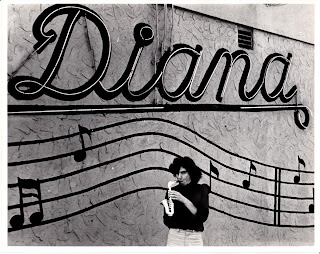 This is the year and that was the year and it all comes down to half a century of living in Los Angeles, mostly Hollywood. No, it doesn't all seem like yesterday; in fact it feels like several lifetimes ago. The Twentieth Century didn't fuck around, what with every decade feeling like another life spent.

How did I even get here? I was just a European boy living the Yankee life in Rhode Island and liking it. I was living in Kennedy Country (New England) and our man John F. Kennedy was in The White House. Everything seemed cool. My father was in the electronic designing department at Brown University in 1963. A few months later Kennedy was toast and so was New England for us.

My father joined the New Frontier headed towards outer space and the psychedelic landscape of Hollywood. He got a job offer from Aerospace in Redondo Beach. Redondo Beach, Manhattan Beach, Long Beach and all points south turned Southern California into a veritable Boomtown for Aerospace workers. My father heard the siren call to Boomtown USA, not mere gold but better, designing spacecraft, missiles and rocket appendages. Welcome to Los Angeles.

Sixties: My first home in Los Angeles was around West Hollywood in the Fairfax District...it was insane, we were sandwiched in between CBS Studios with its ever watching eye, the Silent Theatre and the enormous Pan Pacific Auditorium...we'd have dinner at Canter's and I'd stare at the freaks with their long hair and beads...my Mom said, "Andy, don't stare"...people were getting pissed...I remember watching the Watts riots on TV and my parents said "Stay home today"...

Two years later we moved to Beverly Hills...I went to a modern Hebrew school where half the kids looked like they came from mixed marriages but I didn't care.... they were building Century City down the street and LBJ was going to speak at the Century Plaza Hotel with kids marching down Olympic Boulevard, protesting the Vietnam War...we were too broke to do anything big on Saturday night my dad took us out for a ride (families used to do that sort of thing) down Sunset Boulevard which was crowded as hell, especially since there were so many paddy wagons pulled up in front of Pandora's Box on the corner of Sunset and Crescent Heights.

Seventies: My teenage years were spent in endless nights at Rodney's English Disco and watching countless glitter bands at the Santa Monica Civic Auditorium...glam rock seemed like it would never die, it just got bigger and crazier and I got into the scene, platforms and velvet flares...Westside days spent going to summer school at University High and Rhino Records in Westwood...taking endless jazz music courses, harmony theory and the whole damn Big Band thing at the Dick Grove School of Music in North Hollywood...

Then driving down to gay discos like The Other Side in West Hollywood...Santa Monica Boulevard haunts like a weird old dream even to this day...and then there were punk rock memories at The Masque, playing there and even living there with Spazz Attack and Brendan Mullen, moving to punk palace The Canterbury, big mistake but so what? 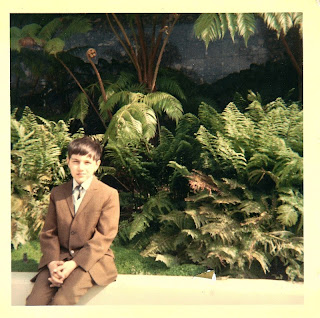 Eighties: Disappointed by the decay of Hollywood punk and shitty new wave I retreated into endless movie shows at The Beverly Center, sitting in my car in the darkness of the Centinela Drive-In with the Studio Drive-in across the street, right by LAX so during the film you'd watch the jet planes swooping down for a landing...

I lived across the street from A&M Records on la Brea Avenue in a trashy courtyard next door to a massage parlor..one rainy night I found a hundred dollar bill by the parking lot...bought a leather-bound saxophone case with it...Rajis was the rockin' club by the end of the decade and I watched The Nymphs, Haunted Garage and Pygmy Love Circus, the greatest club ever...I started my own band Trash Can School and we recorded at Radio Tokyo in Venice for about three years (1988-1990)...it was epic.

Nineties: My band played with some amazing bands at The Shamrock and Jabber Jaw, I'll never forget them...I lived at The Gramercy Apartments in Koreatown, apartments that recalled every noir film you've ever seen...Elisha Cook Jr. must have drifted through the walls several times...after I broke the band up I moved to the Miracle Mile and went to every lowbrow art show at Luz De Jesus on Melrose Avenue, there was Pablo and Pizz and Robt. Williams and XNO and Billy Shire, Golden Apple Comics representing, too...

Then there was Johnny Legend and Eric Caidin putting on sleazy movie shows at the Florentine Gardens on Sundays...I married Rebecca and we created fashions for The Fetish Ball and every other kinky fetish event in town... we also had a band called Cockfight and made a funny video with Ron Jeremy, it was clean, it's cool.

Y2K: Rebecca and I worked morning, noon and night...dealing with bullshitting imagineers who knew nothing about art, smarmy stylists who knew nothing about fashion and a lot of TV people who wanted to interview us and show our clothes....then there were the Comic-Con assholes who knew nothing about anything and the money slowed down so I worked at Dodger Stadium for awhile in the executive office designing their merchandise catalog...the palm trees circled around Dodger Stadium looked like a dreadlocked tribe of dinosaurs looming over the city...bored with that I drifted into a 15-year career with Los Angeles County....played my last show ever at Headline Records on Melrose Avenue...LA, always LA.

Teens: So fifty years later I still eat at Canter's and haunt the streets of West Hollywood. Now I'm a writer, writing, always writing...tell the story even if no one wants to listen, read the words of God even if no one believes anymore...making clothes for myself and other people, hitting the Garment District in the early morning...although there were a few detours here and there in New York and Europe I always returned to Los Angeles like an old habit I couldn't shake off..I'm still in Hollywood...still making noise, still making trouble...take my advice, don't forget to go to the beach. 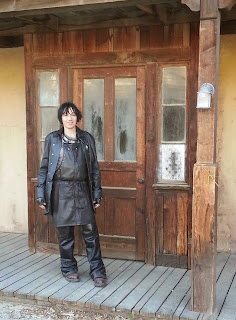 Andy - thanks for sharing part of your life story.

Thanks for letting me know you liked it, much appreciated.