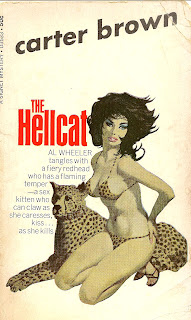 There has never been a beast so strange as the paperback publishing world, a once inexplicable planet where writers could make a fortune without garnering much respect in literary circles. I'm not referring to modern potboiler stars like Stephanie Meyer or Robert Ludlum. I'm referring to someone like Harold Robbins, who pretty much in his time had a stranglehold on the bestseller charts with tomes like "The Carpetbaggers" and "The Dream Merchants".

His books have sold in the billions worldwide. When people talk about great crime writers the usual names crop up: Raymond Chandler, James M. Cain, Donald Westlake, Elmore Leonard. Few ever mention or even care about Carter Brown, who in his time (1962-1972) sold millions of paperbacks worldwide. Who is Carter Brown?

Carter Brown in actuality was an Englishman whose real name was Alan Geoffrey Yates. Originally a PR writer for Qunatas Airlines in Australia, Yates turned to writing pulp fiction westerns, sci-fi space operas, and even romance weepies novels under assumed names. Every Carter Brown crime novel took place in America, and it has been rumored that a ton of them were written before Yates even set foot in the States!

The three most popular recurring characters in Brown's novels are Police Lieutenant Al Wheeler, private eyes Rick Holman, and dumb bunny detective Mavis Seidlitz (with the 38-24-36 measurements). Whichever character Brown featured in his novels you were always guaranteed a lot of smoking, drinking, and sexing up. In other words, Carter Brown novels were cheap Swinging Sixties pulp fiction at their sleaziest. Just to amp up the sleazy sex factor, each brief paperback clocking in at usually 120 pages a piece all featured covers of skimpily clad goddesses by the great Robert McGinnis. 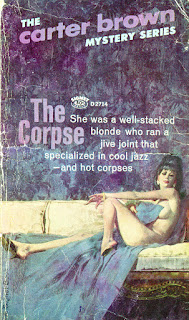 For those who dig the Peter Gunn, Johnny Staccato and 77 Sunset Strip TV shows, Carter Brown is more of the same. Hard lovin' swingin' and two-fisting private eye with killer dames who drop their drawers before they swing their fully loaded .357 Magnum at yr. skull. Smoke a Lucky Strike and crack open a Carter Brown novel, it ain't noir, it's better than noir, it's sexy trash.

While I haven't read enough Brown books to qualify as an expert on his work, I'd like to weigh in on some of my favorite books I've read by him:

The Corpse: Lt. Al Wheeler’s on the case of the mystery of the annoying, drugged-out hepcat that got iced in front of the bandstand at the hippest beatnik jazz coffee house. The only reason his murder’s a big whoop is because he’s the son of a powerful newspaper magnate. The Fifties jazz club vibe of the book will remind you of John Cassavetes’ terrific detective show, “Johnny Staccato”. Lots of babes, booze, billionaires and beatnik bongos abound. The Robert McGinnis cover doesn’t disappoint either. 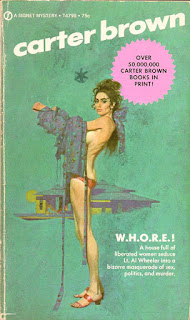 W.H.O.R.E.: One of the more surreal detective novels ever written, police Lt. Al Wheeler runs afoul of a gang of psychotic killers in Mickey Mouse and Donald Duck masks. The Mickey and Donald-mask wearers are strike breakers who plan on assassinating a Cesar Chavez-style protest leader who's making plans on marching down the Grapevine with his fellow fruit pickers. And that's just the first sixteen pages!

Somewhere in the mix, of course, are a team of deranged feminists called W.H.O.R.E. If it sounds crazy, just remember this was published in 1971 when exploitation films like "Sweet Sugar" and "The Mini-Skirt Mob" were at their apex. Unless Carter Brown's estate is controlled by an iron fist there's no reason why his wild novels aren't being reissued by Stark House or Hard Case Crime.

Tomorrow Is Murder: More Sixties sleaze from Carter Brown about a sexy psychic predicting a millionaire’s death on a Joe Pyne-style TV talk show. The PI this time is Mavis Seidlitz, a bodaciously stacked bimbo blonde in the Little Annie Fanny tradition. She’s on the case in groovy Venice circa 1960, busting up bongo beatnik coffeehouses and catfighting witches into Beverly Hills poolsides. Carter Brown never disappoints. 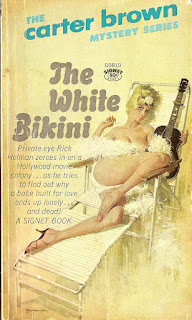 The White Bikini: Quick, entertaining sleaze about a Hollywood party girl found dead on the beach who may be the daughter of a high-powered movie studio executive. The trail to murder leads private eye Rick Holman to oversexed folk singers in coffeehouses of Venice, psychotic bodybuilders in Muscle Beach, and studio brats spinning roulette wheels in Las Vegas. Trashy good fun that embraces Sixties culture at its wildest.

Other Carter Brown book titles you may not have heard of: Who Killed Dr. Sex?, No Tears From The Widow, The Flagellator, The Ice Cold Nude, No Blonde Is An Island, Nymph To The Slaughter, The Bump And Grind Murders, Walk Softly Witch, and countless more!

Without belaboring the point that Carter Brown novels are sleazy but entertaining trash, there are no philosophical soliloquies that you get in a David Goodis classic or some deep existential journey into darkness like Jim Thompson. Like his contemporary Mickey Spillane, Carter Brown served up pure entertainment dressed up as a sexy crime novel with insanely generous servings of pop culture trash: surfing, beatniks, hippies, strippers, health food freaks, fitness and yoga clinics, pill - popping psychiatrists with nothing but sex on their minds, etc. Compared to the crimes committed on shows like "Breaking Bad" it just seems quaint in comparison. 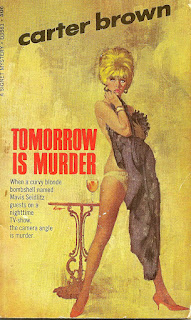 Sounds trashy. I love the covers. I will check them out.