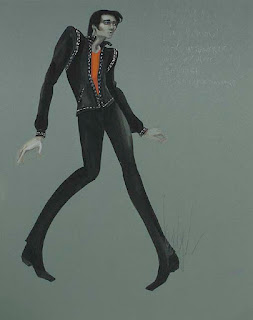 Well, this has been a pretty action-packed week at Viva Rebecca. Anybody who thinks that making clothes is for pussies has another think coming, because a lot of it's pretty physical, more physical than banging on a stupid guitar like a fucking chimp. This is a brief summary of what's happened in the past few days:

(Mon): Spent the better part of the day tearing apart a plus-sized astronaut suit for a private client. By plus-sized I mean that the client is 400+ pounds, so this isn't Buzz Aldrin territory we're talking about. All of the components have to be super-sized and accuracy is absolutely crucial. Working in tandem with that is Rebecca's space alien outfit for the upcoming Barbie convention, which utilizes mixed media of leather, vinyl and multi-colored sequins.

(Tues): Went to The Sword and The Stone in Burbank (http://www.swordandstone.com)to do a fitting for three gigantic statues, two male and one female. All three statues are at least ten feet tall and have to be measured on a ladder and then draped with pattern paper and after, muslin. A lot of crawling around and climbing involved. I left my church goin' clothes at home!

(Wed): Got my two pair of pants in the mail from GuyLook (http://www.guylook.com) from South Korea, a great menswear mail order house. One pair was a wonderful checkered thing, and the other pair was a cool green biker jeans. Lucky I fit perfectly in them as the sizes are very Asian (largest size is a 33 waist). Bless you, YMCA.

Girls are calling Rebecca up for a job trying to replace me. Uh, yeah you can replace me when you can sew, serge, baste any kind of fabric, unpick microscopically tiny seams, draft patterns, trace and cut every kind of material including fur, shop for fabric in the Garment District in less than two hours and still shut the fuck up about your boyfriend problems, bitches. 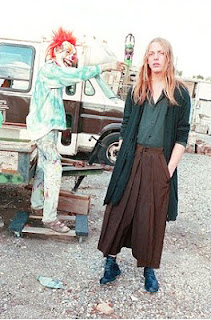 (Thrs): Went swatching for leather at United Leather in downtown Los Angeles (http://www.unitedleather.com), probably the closest thing LA has to SH Frank in San Francisco, a veritable endless cove of leather, suede and even furs. Love the textured leather and the prices were reasonable.

The phone's ringing off the hook from production companies requesting our services, so thankfully business is picking up again. What a nightmare year 2012 was. 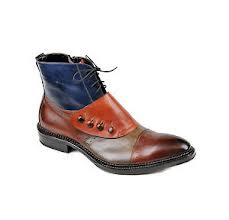 Lately I've been going crazy over Jo Ghost shoes, whose men's shoes are beautifully designed and use only the best and most exotic leathers money can buy. Their shoes are colorful without being too fruity (i.e. Miami Vice) and the designs are some of the most imaginative this side of John Fluevog. 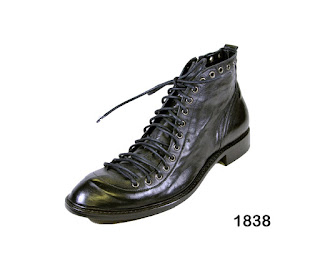 The 1788 Inglese Multi-Color is a terrific boot using three different shades of leather with a lace-up front. I also like the Antik Submarine shoe which uses a colored stingray pebbled finish, and there's also the 1838 with its endless rows of eyelets and laces, looking just like roller skate shoes without the plate and wheels.

So why don't I own more Jo Ghost shoes? Well, Jo Ghost, based in Italy, on average sell their shoes for at least $400, much too much rich for my blood. Yeah, you need gold blood to afford these babies. But if you have gold blood run don't walk to get your Jo Ghosts, more commonly found at Haute Footwear (http://www.hautefootwear.com/catalog). They can also be found at Dellamoda (http://www.dellamoda.com). 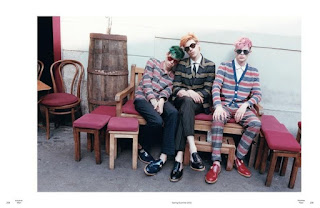 Finally got my hands on the S/S 2013 Another Man Magazine, the best men's fashion magazine on the planet, esp. since Homme Essential went Hollywood and preppy in the past year. If you liked The Face Magazine from the Eighties then you'll like this also a lot. There is so much rock & roll style in this fash mag that you'll think you're looking at the hippest rock magazine ever.

Although the cover shows Arctic Monkeys lead singer Alex Turner on the cover there's hipper people to be found inside, like a feature on Nick Cave's sartorial style from his days as grub monster in The Birthday Party to his 3-piece suit look in The Bad Seeds. There's also a photo shoot with Bobby Gillespie of Primal Scream and a sneak preview to Richard Hell's upcoming memoirs. I also liked the piece that matched eerily similar quotes on style from Johnny Thunders and F. Scott Fitzgerald. Very cool!

If you like your models either Quadrophenia-style with purple and pink hair or the decadent Seventies Keith Richards beehive boy look, every page just explodes with rock energy, with fashions that include a great Hermes leather t-shirt, Lanvin bondage pants, Jeffery West rocker boots and old Ralph Lauren even has a few rocker threads to show off in here. Another Man is published bi-annually and if you don't mind coughing up $15 an issue it'll sit on your hipster coffee table proudly. 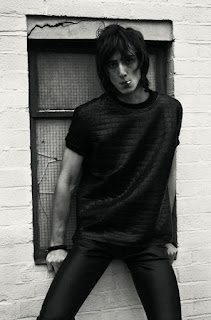 Top illustration: Elvis by Donfeld, from the book "Hollywood Sketchbook".