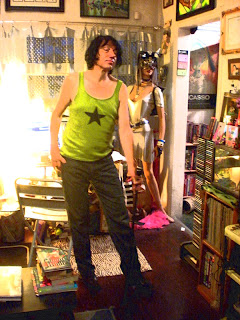 Hi, it's me the guy who threw up in your purse the guy who hurled Japanese finger food against the wall in your kitchen and never got invited again to your home you hypocrite it's me the guy who screamed for hours in the nightclub which doesn't even exist anymore I'm not that guy anymore and haven't been for some time but there are people who don't want to let go of their stupid memories of who I was they just want to hold on to the outlines of an unhappy and outraged and angry man who wanted to kill banality like a hunter in the dead of winter. I'm no longer on your radar I'm no longer in your orbit I'm not dead I just don't care about being in your petty and stupid life so there it is and the funny thing about it is you resent the fact that you can't complain about me and you can't attack me anymore because I don't care your dirty little sand pit is all yours sit in your shit and make your own mess it must suck to not have me to blame for your own kill switch you call a brain insane.

It's so sad that within the past few weeks several cool stars from the British Invasion have passed on, notably Rick Huxley of the Dave Clark Five, Reg Presley of The Troggs, and early Beatles colleague Tony Sheridan. Granted they were pretty high up there in the years but they still rocked like crazy and gave me hours upon months upon years of listening pleasure. Their work was always exciting and fresh to listen to even in year 2013.

Special mention should be made of Reg Presley's excellent range as a rock vocalist. I don't think most people realize what an extensive range he had, going from raunch god on the classic "Wild Thing" to leering Peter Lorre soundalike on "From Home" to whisper gnome on "Night Of The Tall Grass" and "Strange Movies". And just when you thought he hadn't a shred of sensitivity in his sleazy bones he could tug on your heart strings with the beautifully tender vocal of "Love Is All Around". Brilliant, just brilliant. They will all be missed.

Bearing in mind that my English heroes are slowly departing I flew into a senior boomer tallywacker panic and downloaded a ton of British Invasion music, hoary old classics like The Merseybeat's "Sorrow", vintage Animals, Herman's Hermits and Dusty Springfield's "I Only Want To Be With You". While downloading these records I listened to a lot of Manfred Mann tracks and marveled how incredibly sophisticated the early stuff was, effortlessly mixing jazz with R&B and garage rock on tracks like "I'm Your Kingpin" or "Hubble Bubble".

Also in the underrated category was Sounds Incorporated, a totally killer instrumental unit that insanely combined James Bond spy music with Northern soul funk workouts at break neck speed. No wonder The Beatles tapped them to be their opening act at Shea Stadium. They can also be seen in the movie "Top Gear" rocking out a totally looney take on "The William Tell Overture". Check them out!

I also really liked a track by The Nashville Teens called "Devil In Law", more laid back than "Tobacco Road" but just as cool and the lyrics are pretty funny, too. I also liked "Even The Bad Times Are Good" by The Tremeloes, a really great song that stands tall next to their massive signature hit "Here Comes My Baby". The current state of music as such is so piss poor that even The Rubettes' hits "Sugar Baby Love" and "I Can Do It" sound pretty awesome, and that's skull-fuckingly bad.

There's a new generation of film directors who seriously haven't got a clue what they're doing or even why they need to do it. It's pretty sad how it's become the rule rather than the exception when Rebecca and I to meet with these guys who present us with their projects and they have nothing planned or designed for us to work on.

One idiot came by and told us he wanted us to make outfits for his movie which was "kind of like The Craft, Sucker Punch, and some anime". He had a few bad sketches of chicks in skimpy outfits. One looked like a shit Baby Spice knock-off and the other one was some garbage goth witch outfit. This fortysomething director wanted to make some teen chick superhero movie. GROAN. Not again. I said okay, anime like The Dirty Pair, right? He didn't know who The Dirty Pair was, all he supposedly knew about anime was that it was supposed to be a bunch of semi-naked chicks running around kicking guys.

Rebecca: "Okay, so do you have any specific outfits in mind?"
Old man director: "No, I still haven't finished the script yet, so the outfits could change".
Rebecca: "What are the sizes of the girls?"
Old man director: "We haven't cast the film yet so I don't know anybody's sizes yet, but I'm anticipating really skinny tall girls. But they have to know how to fight!"

What the fuck does that mean? You don't have a script, don't have any actresses willing to do stunts, what do you have and why are you wasting my time? Go jerk off in a fireplace, you clown.

I leave you with Rick Huxley and Mike Smith, both gone but not forgotten from the Dave Clark Five: