"Fermat's Room" is a tense thriller with brains that you'll either love or hate. For every person who's seen it and thinks it's a brilliant suspense film that challenges your imagination there's an equal number of people examining any possible plot holes and inconsistencies so they can feel superior to the spine-tingling tension that fills this amazing film from Spain.

Directed by Luis Piedrahita and Rodrigo Sopeña, Fermat's Room begins with the old House On Haunted Hill premise of four complete strangers invited to spend an evening in a weird little house on a small holm (def. island in the middle of a lake). What the strangers have in common on first sight is a love for mathematics, and in fact are given code names named after famous mathematicians through the ages who all apparently died at the same age of the invited guests.

There's Hilbert (Lluis Homar, excellent), an aging scholar who's harbored feelings of suicide after having been scooped on an important paper he was working on for decades on Goldbach's Conjecture; a young lady named Oliva (Elena Ballesteros), a mathematics expert; Pascal (Santí Millan looking like Anthony Perkins), not a mathematician but an inventor of gadgets like a popcorn popper shaped like a duck; and Galois (Alejo Sauras), the young college prodigy that scooped Hilbert on the Goldbach theory that earned him fame, a cash prize and loads of pretty college girls. 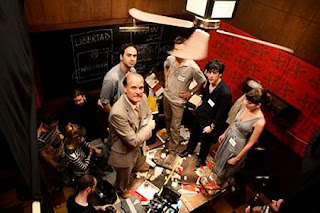 Our four geniuses all hook up in a tiny room in the house that resembles David Lynch's red hell room from "Fire Walk With Me" (with the dancing midget). After a nice, quick meal they find that they can't get out of the room with math questions sent to them through a small PDA - yes, that's right a PDA. Who would have thought that PDA's still had a place in this world? Well, it does in this movie.

The PDA sends questions to them that they must answer within a minute or hydraulic presses installed behind each wall programmed by the PDA will move in a few feet at a time. If they take too long the walls close in more, and if they get the math problem (here called "enigmas") wrong, the walls will close in and crush them to death. The suspense in Fermat's Room is heightened because as the film progresses and the walls close in more the contrast to the cinematography is heightened more and more, the effect being like that of lights turned up higher and higher until everything is simply blinding. This effect in lighting is one of the most imaginative I've seen and definitely enhances the suspense factor. 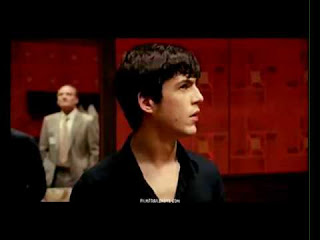 As enigmas come one after the other walls close in causing furniture to fall over and mirrors shatter and only the correct answer can keep the room from closing in. The only way the four guests can stall the walls from crushing them is by taking all the book cases and lying them down across the room, symbolically showing that their education is the only thing that can keep them from being murdered.

The four guests ask continuously who Fermat is and why did he invite them into a death trap, but as the film continues they all confess to terrible sins they recently committed, the room looking more and more like some blood red confessional booth of sorts. One killed, one stole and one performed unspeakable acts of sex, all impacting at some time one of the guests. But who? Which one is Fermat? Will the other three get out in time before the entire room comes crashing in? 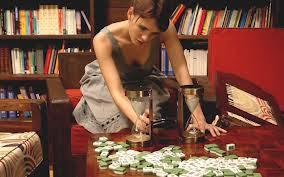 All four actors turn in excellent performances, with Lluis Homar standing out as a scholar who knows everything except how to cope with failure. I enjoyed watching all the math problems being worked out and the logic that went into them, and that's a pretty major feat for someone who never did well with math in school, but that's the real genius to Fermat's Room: while you're being entertained you're learning things and it's awesome.

Other films in this vein include Exam, The Method (directed by Burnt Money director Marcelo Piñeyro!) and Cube.

White trash TV can show all the lame Heavy Metal Dad shows they want, but the greater truth as usual is served up by punk rockers, and the punk rock documentary "The Other F Word" is no exception. Produced by Morgan Spurlock (Supersize Me), the film interviews several punk rock musicians, mostly singers, about living the life of an FTW punk rocker and still living the punk rock life. Some of the dads interviewed are Flea, Fat Mike from NOFX, Art Alexakis, Mark Mothersbaugh, Greg Hetson, and even Tony Hawk.

What the film is really about is the fact that you can wave your freak flag as high as you’d like but ultimately everyone has to grow up. Once babies are born and bills come streaming into the house you’re not Daddy’s Little Monster anymore, YOU’RE Daddy, and it’s somebody else’s turn to be The Little Monster. It’s this change in maturity and responsibility which is really at the heart of the documentary.

The centerpiece in “The Other F Word” is Pennywise lead singer Jim Lindberg who has three daughters, one of which is already of high school age. Because record sales don't earn shit anymore the only way Lindberg can realistically support his family is by touring non-stop all year, which is always deadly for family relations. Lindberg clearly realizes that his family's life is passing him by and it's time to make some real decisions about his life.

The film goes through great pains showing the drama of Lindberg’s deciding whether he should continue touring with Pennywise or stay home and be a good Dad for his family. The film ends with him deciding to leave the band and be a good Dad. End of story. Not. After the film was made Lindberg not only didn’t play the family man, but in fact started a new band of his own and went back on tour, doing exactly everything he complained about doing with Pennywise. And so here we are again with another rock documentary that plays like bad television.

But the whole thing’s pretty lame folks, because two months ago Lindberg rejoined Pennywise, rendering all the drama in the documentary to shit. Maybe I was better off watching the Jack Osbourne-produced “God Bless Ozzy Osbourne” documentary, after all. Ozzy’s still a cooler punk, after all.