How To Stuff A Wild Poodle 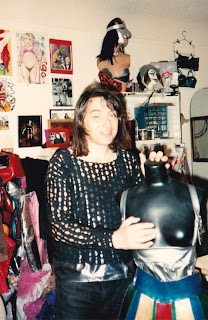 It started with a phone call, a call from an art director who specializes in gigantic pieces whom we’ve worked with in the past. The new project assigned to Rebecca was for a Dole television commercial, to dress a monster truck up as a huge white poodle. Why not? When it comes to Rebecca all things are possible, except cooking. I do all the cooking. Otherwise with Rebecca all things are possible.

If anyone had the chops to dress a monster truck up to look like a Fifi pooch it was her, who built an electronic dog for the Nick Swardson show, a raw meat outfit for the Weird Al Yankovic parody of Lady Gaga, and even a 7 foot tall pot head cat mascot for a music video. No job is too weird or too small for Viva Rebecca (staff of two: Rebecca and me, her assistant).

Construction on the outfit would be made in a small loft in Eagle Rock. The studio looked very similar to a body shop or car paint garage. Rebecca had her Juki industrial upholstery machine moved in towards the back. For pattern and fabric cutting we employed a large ping pong table because we required a lot of space. We also brought grommets and grommet setter, a Pfaff portable machine and a large flagpole of endless pattern paper, which we were going to tear through for drafts and re-drafts.

And drafting we did. The monster truck lay in the middle of the loft in pieces. We measured the fenders, the roof of the cab, the hood, the truck bed and the height of the cab in proportion to the bottom of the chassis. After taking all our measurements we then applied them to pattern paper, scaling to suit the coach and then cutting the gigantic pattern pieces. 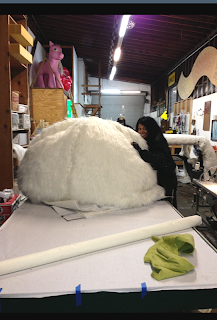 Before I go any further I need to mention that this was early January, temps were in the forties and the loft had no heating so everyone toiled all day in coats, heavy boots, scarves and gloves. While it wasn’t Siberia it was cold as fuck. The intense cold of the operation made me learn a little sumpin’ about myself. Just like a body can be preserved in suspended animation so did my basic body functions in this glacial environment. In other words, my exposure to the cold was so prolonged that I hardly went to the bathroom, felt hunger or got tired. It’s like I was a jar of pickles kept in the freezer!

In addition to cutting the patterns with Rebecca I cut the fake poodle fur which spread all over the place and got all over my clothes, in my eyes and even in my mouth. Protective eye wear sometimes worked but wasn’t always effective because it was the spreadingest shit I’ve ever worked with! In order to pad the dog fur I spray glued the fur to foam which was a very sticky (ouch!) process. Precision was very important to line the two materials up together. Rebecca sewed one segment and then another until they became so enlarged I had to hold it up while she ran it across the machine. It’s a bitch to sew over ten feet of material without dragging it all over the floor, and this fur was supposed to stay as white as possible.

Another obstacle was stuffing the poodle’s big white pompadour on top of the cab, which necessitated stuffing tons and tons of fiber fill and foam into a big poof ball pyramid type thing. Simple, right? Well if it’s not stuffed equally around the head you’re stuck with a lopsided quiffle, so careful attention had to be paid in filling out the dog’s topper properly. Rebecca also supervised the construction of the truck’s chipper pom-pom tail, which had to be large enough to be caught by the camera without being too heavy and falling over. 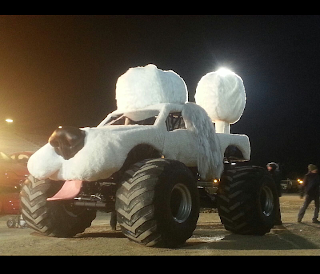 After all the poodle fur pieces were sewn together we had to install them on the chassis, so grommets had to be set so cables and bungee cords could tie them around the truck. Since the truck was going to rock a few jumps we had to be damn sure the cables could withstand any rocking and reeling. Rebecca also stuffed the dog jowls and made them nice and furry. After six long and cold days we had the truck to resemble a perky, white poodle.

A month after we completed the assignment we were watching “Project Runway” seeing all these young, aspiring hopefuls grapple over designing a dress made out of popcorn or license plates or whatever. When the show broke for a commercial we saw it in the flesh on TV: the poodle monster truck, 30 seconds of dementia just to sell Dole fruit drinks. And the commercial was shot in The Mojave Desert all night. Now that’s cold!

so cool to hear what was involved in making that poodle truck. you both rock!!

Thanks Cindy, it was a pretty good job to work on and seeing the commercial was the icing on the cake.