It's After The End Of The World 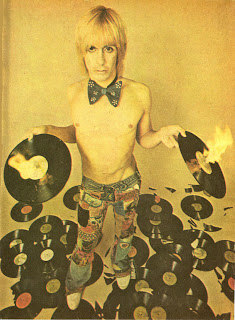 The second half of 2010 was more eventful than the first and I made some important decisions, most importantly to retire from soul-crushing work at Los Angeles County in late 2011. After I retire I will probably dedicate myself to designing and making clothes for Viva Rebecca, a great and promising future. Here is the Top 10 events that happened for me in late 2010:

10. I took some great artisan bread baking classes at Sur La Table. I also got a bread maker and made all kinds of great bread.

9. Los Angeles was cold and wet for most of the year, even during most of the summer so I had a two-month long virus that could only be cured by getting in the sun in Palm Springs and staying out there until I burned it all out.

8. Rebecca designed a great red leather cooking apron with Splatterpunk stitches sewn in. I love it!

7. Since a year has passed since my tattoo I donated blood again. Everyone should do this; it's painless, doesn't take very long to do and benefits everyone, even all you misanthropes. I even got some great Cold Stone Creamery coupons for my trouble.

6. For Rosh Hashanah I bought a shabbos menorah (candelabra) that looks like it belongs in some Barbara Steele movie, like "Castle of Blood" or "The Long Hair of Death".

5. Designed a pair of striped dress pants with a cool leather waistband and belt loops sewn in (pics to come in a future blog).

4. Saw Mark Sultan (aka BBQ from King Khan and The BBQ Show) at Spaceland. He played a great set doing his ultra-mega powerful one man band act. I stood by the exit and saw more people angrily storm out of the club than I'd seen in a long time. I don't know what they expected, but they looked so fuckin' mad it was weird.

3. A segment of "Hell's Kitchen", the food truck challenge, was taped at the LA County Hall of Administration (my workplace) it finally screened in November, and footage of me walking ten feet in the background while Gordon Ramsey's talking to his nimrod contestants can be seen within the first 15 minutes of the show. Yeaaahhhh!

2. Captain Beefheart died at the end of the year, and although he hadn't played music in almost 30 years he lives on as the patron saint to all uncompromising musicians everywhere. With the passing of icons like Beefheart and Sun Ra an era of trailblazing avant garde music is gone.

1. My very first serial, "Crash Walker", modeled after Quinn Martin Productions-type "Man On The Run" television shows from the Sixties (The Fugitive, Run For Your Life, Coronet Blue, The Invaders) successfully published on my blog, and will soon see trade paperback publication. Watch this space. An even newer serial begins later this month.

Well, that's it. 2011 shows lots of promise and I'm absolutely, positively sure it's gonna rock harder than 2010. Anything would! Batten down the hatches - full speed ahead.
Posted by Andy 7 at 5:00 AM