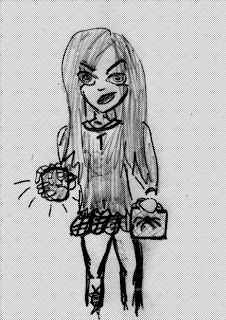 Ø Rebecca’s pretty happy with her new assistant because she’s creative and eccentric, just like her. Her name’s Leah and all she eats are gummy worms and coffee and has a pet tarantula that keeps her company while she’s assisting Rebecca in her workroom. Before I create the perfect portrait of Rebecca I thought I’d warm up by doing one of Leah. The piece I created was called “Tarantulas and Gummy Worms” (‘nuff said).

Ø The sketch (depicted above) exhibits a skewered fusion of slacker lowbrow with German Expressionism (think of George Grosz or Egon Schiele). Leah’s shown holding a cup of coffee with gummy worms crawling out of the mug in one hand and holding a portable cage with her tarantula in the other. The splotch on her leg is actually a bitchen tattoo of her bat dog. The plaid micro mini is also one of her favorite things and has been immortalized.

Ø Rebecca increased the image on the scanner and then traced the image perfectly using red tracing sheets onto the rubber pad. This is interesting only because the format is called woodcuts but there is nary a trace of wood involved at all. It should be called rubbercuts because the pad utilizes the same substance used for pencil erasers, but hey, for the sake of this perverted blog, we’ll call it woodcuts. 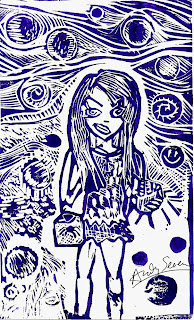 Ø Rebecca loves to scratch things and if you even get close to the woodcut block she’ll bite you like an attack dog, so she pretty much carved the whole damn thing. Frankly I’m glad she did because she embellished it with creepy Vincent Van Go-Crazy ellipticals (“Starry Night”) complete with different kinds of moons, some with happy faces, malted balls, tumors, cannonballs, etc. Brilliant! This was becoming more of a collaboration and I thought it looked great.

Ø Once all the carving is done (45 minutes later) it’s time to make a pass, a printing pass with the brayer (roller) with one color over the pad (we went for dark purple). Watercolor paper stock was used – it’s practically card stock, a little harder actually so it’ll soak up paint without getting too soggy. The result is depicted below. Nice!

Ø Another few passes were made also with a small brayer rolling green on the foreground with the larger brayer rolling purple over the background. Several pads could have been used with registration lines just like a silk-screened image but we didn’t want to get too involved in this production. The two-tone image turned out pretty well, also.

Ø The end result of this project was most satisfactory to me. Rebecca’s embellishments and craftwork were highly complimentary to my artwork. Eventually I’ll have to carve something while she’s sleeping so I can acquire some experience. A few knockout drops should do the trick, heh! Just kidding.
Posted by Andy 7 at 12:17 PM

Liked this post very much.
Who knew I could stop by your blog and get an art lesson? Eh, it wouldn't have been the first time.
Nice work you two.