Stuff I Burned From TCM, Part 7 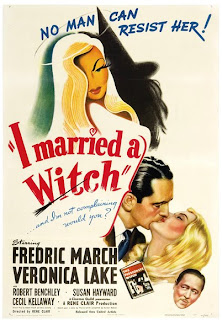 Considering the star power that fuels many of the films listed today you would think that these gems would have seen the light of day on DVD already, but given the poor economic weather it won’t be for awhile. It’s probably cheaper to release the latest Judd Apatow brain rot than pour some money into cleaning and digitally processing some Ann-Margret wank fest. That’s why DVD burners are crucial with TCM on all night long, and here’s some of my epic finds:

I Married a Witch (1942): Veronica Lake looks sexy but she also looks funny, as in funny lookin’, so she’s perfect in this goofy comedy. A witch burned at the stake during the Salem trials era travels through time to torment the future generation of the judge who prosecuted her, but she falls in love with him instead. Mr. Right is played by the perpetually stiff Frederic March, no dreamboat in any shape and form. Gossip has it he was a creep to poor Veronica during the filming, which I believe. They should’ve gone with Fred MacMurray or somebody halfway likeable. Any screen time without Veronica Lake is a waste of film.

All Night Long (1962): This film, touted as “the jazz version of Othello” fairly disappoints because the wife doesn’t get killed during the course of the movie but instead scats and sings with a frozen puppet face all the way through. Notable for five minutes of footage of Charles Mingus, who gets some juicy dialogue, like “let’s swing, cats!” Notable for watching a young Patrick McGoohan playing a reptilian drummer conniving his way around the swinging British jazz world. Overly talky and frankly boring, it’s worth one watch if you can mange to stay awake “All Night Long”.

Swinger (1966): If you thought Ann-Margret’s dance routines in “Viva Las Vegas” was Cinema Gold then your head will explode watching this narishkeit, the money scene showing her in a body painting party dancing and whipping her endless miles of red hair around. Tony Franciosa plays a girlie mag Hugh Hefner-type, the kind of typecast he was saddled with during the swinging Sixties, just like in “The Sweet Ride”, "Fathom" and “The Name of The Game”. Needless to say he falls head over heels for a wholesomely harlotic heroine. Pretty trashy business, but if you like psychedelic sex comedies this one’s amusing.

13 Women (1932): Myrna Loy plays an evil Eurasian woman who systematically plots the killing of the 13 sorority sisters that bullied her back in college. All of her victims are of the snotty super-white finishing school snob variety. The film runs approximately 59 minutes and never wastes a minute of action, and Loy never looked so cool. This film has to be seen to be believed.

The Screaming Mimi (1958): Anita Ekberg (“La Dolce Vita” era) plays a severely traumatized stripper who’s being manipulated by a sleazy psychiatrist. I guess back in the Fifties this was a serious plot point. Nowadays it sounds like another day in Hollywood! TCM never disappoints.
Posted by Andy 7 at 6:41 PM

Andy: I haven't seen any of these titles - yet. Thanks for the handy film re-vue. Always interesting stuff!