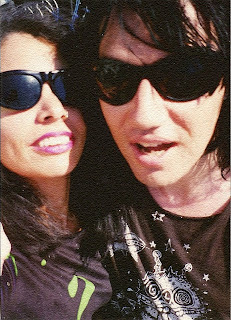 Let’s be honest, people are peculiar about getting married. Forget about the baseball game proposals, is there anything scarier than some douche in a chick flick asking his girl, “Honey I think we should grow old together”.
Holy shit, is there anything scarier than a bickering old couple? That’s romantic? You really want to picture yourself fifty years from now, spaced out and smelly, arguing with some old cunt you’ve been stitched to for fifty years?
The worst part to getting married, ironically enough, is the engagement. Before we got married, people were so dramatically opposed to our wedding we actually had to be sneaky about it.

The Engagement: Rebecca’s parents essentially hated any guy that dated her, and she had an ex-boyfriend that threatened to call Immigration on her and have her deported. I, on the other hand, did not have my father’s blessing. When I leaked, no oozed out the information to my older brother I was getting married, I added, “By the way, before you meet her, I ought to let you know, she’s black”.
My older brother passed on the news to my father, who bristled, “She’s black? What??? It won’t last! Typical Hollywood marriage, it will fall apart”.
On the other hand, her family was less than thrilled to hear Rebecca was marrying a Jew.
When she oozed out the information to her Hollywood scenester friends she was getting married her phone rang off the hook. Late at night. From her ex-boyfriends. She let the answering machine take the calls, and we’d listen to their whiny voices, “Heyyyy, Rebecca”, “Rebecca, I saw this foxy girl the other day, she was hawtttttt, when she turned around it was yooouuuuu”…we lay in bed and laughed like devils at these dorks.
Rebecca played in a band for something like 5 minutes with a girl I used to date, and she said, “Ugh, Andy Seven, he’s totally in love with me, what a freak!”
“Really? We’re getting married in a few months”.
“Oh! Well!” she flustered, “Uh, harrumph, he’s very special, you know. He has a private side to him, that you know, uh, nobody else knows about that makes him so special”.
Yeah, bullshit.
The rest of Rebecca’s friends were Echo Park gays that thought I knew nothing about homosexuality and would be shocked by their behavior. I don’t know where they got that impression but they kept camping it up like a drag queen’s convention every time they’d see me.
“Girl, my ovary is killing me!”
“Honey, my titty rings are so on fire!!!”
Even that idiot Eric Erlandson from flop group Hole weighed in by saying, “Andy Seven??? What’s Rebecca doing with Andy Seven??”
“Why? What’s wrong with Andy Seven?”
“Don’t you know???” Articulate bastard, isn’t he? That must explain why Drew Barrymore dumped him in less than four months. He must know his women!

The Welding, uh Wedding: We got married at L.A. County Superior Court, leaving religion out of the marriage process. With two witnesses present, it was a long, slow process because we got married on Lincoln’s Birthday (February 12). Since Valentine’s Day fell on a Sunday we decided Honest Abe’s Birthday would be the next best thing (Friday). Everybody had the same idea, so we sat on the waiting room floor with 100 other couples. Some of them wore bridal dresses with cute little mija flower girls standing by.
What slowed everything down was a gay couple (who protested the gay marriage ban) at the front door of the office and held up proceedings for everybody.
When we finally made our vows Rebecca laughed through the whole thing with tears in her eyes. I guess she was happy.
Just so we wouldn’t leave anybody out of our wedding ceremony we had a wedding party the next night in Culver City (Palms, actually). All of our friends were there, and Flipside Magazine took pictures for publication in their next issue. The next day Courtney Love phoned Rebecca, “Are you really married to Andy? How ‘good’ is he?”
I never did like Hole.
Fifteen years later we’re still married, lasting longer than most marriages and with the enmity of our families. It’s ironic to think that the most subversive thing I ever did in my life was get married. One thing's for certain: if we grow old together we’ll never look it, because when you’re happy you always feel young.
Posted by Andy 7 at 7:45 PM

This is really sweet!
I always thought marriage was pretty ehhh and not for me. Then I met someone I wanted to marry and realized that it rules.

I hated being single, it was hell!

Andy WE'VE never met but Rebbecca is one of the coolest people I know , she obviously has good taste!

Thats was a beautifully articulated story. It's amazing how we find the people we need eh?

Swoon.
Lump in my throat.
To echo Wicked - we've never even met but you two have something special. It shows.

Thanks, Wicked & Dusty. Having someone great in your life (besides friends) makes life more bearable.