Anna May Wong: Daughter of the Dragon 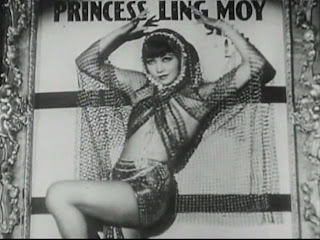 Turner Classic Movies recently screened their Asian film festival, and sandwiched in between annoying Charlie Chan and even more annoying Jackie Chan they showed a magnetic but obscure actress named Anna May Wong. Like Louise Brooks and Lizabeth Scott she fell short of major stardom in spite of the fact that she illuminates a film the minute you see her. She holds her own effortlessly next to Marlene Dietrich in "Shanghai Express", no small feat. She was sexually radiant in a silent film called "Piccadilly" playing a sinister Jazz Age showgirl. Many of her films, good and bad, were screened during the fest. Because of her ethnicity she was cast for the most part as unscrupulous Dragon Ladies, a sheer waste of her talent as most of these pictures were absolute B-movie trash. One of them hit a nerve, though, and it was called "Daughter of the Dragon".

Filmed in 1931, the film begins with Anna May Wong playing showgirl Princess Ling Moy knocking 'em dead in London's West End. Backstage after her show she's promised a meeting with her long lost father, who turns out to be the infamous Fu Manchu(!). She's taken to his hidden lair where he tells her she's the heir to his evil empire. Fu Manchu tells Ling Moy, "I wish I had another son to exact my revenge."
Ling Moy, desperate for her father's approval, vows, "I will be your son!"
There's an overall melancholic need for approval as Ling Moy desires to be accepted by her father, and later by Ronald Petrie, the blandly blonde English gentleman she lusts for.
"Will I ever have golden hair and eyes of blue?" she yearns for his love as much as she does her father's.
"Strange - I find you oddly attractive", is Petrie's left-handed compliment. Just to make sure she can successfully seduce him she relegates his fiancee Joan Marshall, equally blonde and bland, to her evil Chinese torture dungeon.
Of course Scotland Yard, led by Chinese detective Ah Kee shows up on time and heroically saves our two British white bread lovers and kills Ling Moy, but not before she fatally shoots Ah Kee. The film ends with the heroic Chinaman and the dastardly Dragon Lady dead in each other's arms, like a lover's clutch. The message: Chinese women belong with Chinese men, and not with good, upstanding Englishmen. 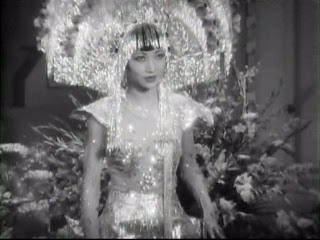 While I was watching this movie I couldn't help thinking how incredibly dull the good, vanilla-white English were in character and physical appearance, and how the movie only came alive when the exotic and gorgeous Ling showed up on screen. I also asked myself what the significance of showing Chinese torturing the imperialistic British was in this film, and all I could think of was some bizarre payback for the real-life abuse the Chinese suffered building railroads in America just fifty years before the release of this movie. It felt like some form of cinematic revenge.

The great irony about Wong was that although she was always cast as a Chinese woman she was born in Los Angeles, California and never dated Asian men, but American men. In spite of all that she had to play the exotic Pekingese just to make it in the movies. Even in real life she yearned to fit in somehow, just like in "Daughter of the Dragon", and that's why this silly B-movie is bigger than its intentions.
Posted by Andy 7 at 8:47 PM