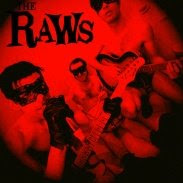 If people want to spend their time watching the tired Foo Fighters play Who covers on television, that's their prerogative. Me, I'd rather check out new bands on the Garage Punk Hideout, a website that's the punk version of mySpace, a global smörgåsbord of grease and filth and full of rockin' good music. Here's my three most rockinest pals from that site:

The Raws: From Istanbul, Turkey(!) these guys play some of the most vicious punk rock I've heard in years with a guitar sound that'll rip your ears off and feed them to the dogs! They wear bug glasses, burglar masks and play in their panties. They also seem to think I'm a girl, but that's another story! One of the band members is called B-Man and they have a raunchy song about him called "BMen". Who knew Turkey was such a punk hotbed?

Les BOF!: It only gets weirder, folks! It's common knowledge that the French and the British hate each other like cats and dogs, so imagine a band from Scotland who play snotty garage blues fronted by a French dandy who looks like he belongs in a Jacques Brel musical:) Les BOF! call themselves "UK Premier French Garage Rockers" and they walk the walk = they play a killer tune called "J'ai Perdu Mon Mojo" ("I've Lost My Mojo"). Every song in their repertoire is sung in French, like Jacques Dutronc, their hero. Alors, marveilleux!

The Torpedo Monkeys: Saving the best (and weirdest) for last, The Torpedo Monkeys from parts unknown play greeaaasy garage punk squawk in cool rockabilly/glam clothes with "Planet of the Apes" masks. These sleazy chimps will give you chills when they tear through "Hanky Panky" and other mind-melting tunes. They also have a badass collection of pawnshop gear to rock yr. panties off! Charlton Heston must be spinning in his grave. 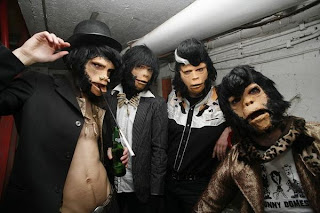