Stuff I Burned From TCM, Part 2 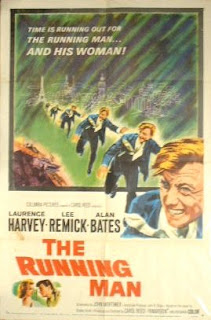 Never count your chickens until the omelettes are broke: in a previous blog post I bemoaned the fact that “Black Legion” would never see the light of day on DVD. After all, it’s Humphrey Bogart joining the Ku Klux Klan. Well, guess what? It’s coming out this February as part of the Warner Bros. Gangsters DVD box set. I don’t know if the Klan can be called gangsters, psychopath hillbillies might be a better description, but Hell, it’s actually getting released. Rockin’ good news. Here’s more crap that needs to get released, and soon:

The Running Man (1963) – Legend has it this movie was a flop because it came out right after the JFK Assassination with the title “The Running Man” starring LEE Remick and Lawrence HARVEY. Good thing Gerd OSWALD didn’t work on the movie.

It’s too bad, because this is yet another great film from Sir Carol Reed, one of the most underrated directors ever (he did “The Third Man”, “Our Man In Havana”, and “Trapeze”, to name a few). Lawrence Harvey and Lee Remick play a married couple who pull a million-dollar life insurance scam and high-tail it to Spain with the money (woohoo!). Alan Bates is an insurance investigator who gives Lee Remick the 3rd Degree in England, so when she runs into him in Malaga he tells her he quit his job as an investigator, or has he? He hounds her like crazy through the picture. Is his pursuit sexual or is he still on the case?

Meanwhile Lawrence Harvey is having so much fun tomcatting in his disguise as a swinging playboy he drives her into the arms of you-know-who. So, you get the picture: it’s a wild romantic suspense adventure. You’ll marvel at Alan Bates’ uncanny resemblance to Noel Gallagher of Oasis.

Bordertown (1935) – Paul Muni plays a Mexican immigrant practicing law who gets disbarred by a rich racist attorney. Muni bolts from L.A. to Tijuana to work as a bouncer in nightclub and ultimately promotes to kick-ass club owner when he runs into the attorney’s wife. Romantic sparks ensue until she plays the race card and then the real sparks begin. While all this is going on the club owner’s wife (Bette Davis) keeps putting the moves on him, and eventually kills her husband to make it legit. You’ll marvel at Paul Muni’s uncanny resemblance to Benicio Del Toro.

Nocturne (1946) – A womanizing composer gets his brains blown out in 1940’s Hollywood and George Raft (playing a cool detective) is on the case investigating it. Every ex-girlfriend he interviews is a Forties hottie and they all say the murdered tunesmith was a dirty dog. Which girl did it? Since Raft can't act his way out of a used condom (just like Vince Vaughn) the biggest star of the film is the stylish Hollywood architecture and Sunset Boulevard location shots. RKO films are trashy fun, and this is no exception. 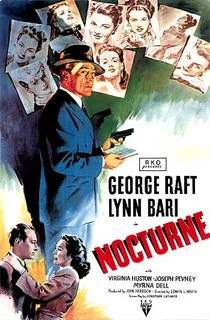