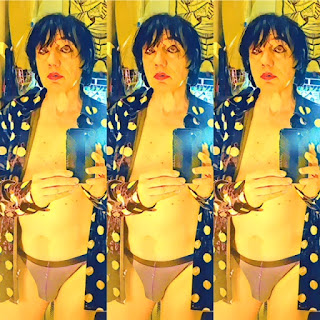 1974. It’s a dark, moonless night in my house in Los Angeles. The time is 1:49 am and the silence of my sleep is broken by the sound of my father screaming in his bed. He sleeps in the living room alone. His wife/my mother died four years earlier.

My father slept without a mattress on his bed, a flat surface with blankets and a pillow. When I heard him scream I got up to wake him up.

He laid in bed with his eyes closed and screaming; this happens on occasion but not frequently. I shook him gently.

“Wake up, Dad, wake up, you’re having one of those dreams again”, I said quietly. He slowly stirred and his face relaxed a bit. His eyes opened quickly and focused on me.

“Oh…I dreamt about it again”, he said, exhaling to find some relief.
“Well, it’s over now. Do you want a glass of water?”
“No, but my back’s aching again. Walk on my back”.
“Well…okay, but just for a minute”.

My father spun around, lying on his stomach. I stepped up on the flat bed and got on his lower back, slowly and lightly walking all over his back, getting on the shoulder blades, padding to the sides of his spine, making sure not to step on the vertebral column but around it.

I traveled across the topography of my father’s back, following the receding line of his back like some uncharted trail. I slowly treaded towards the sciatic region as he exhaled and quietly sighed. I was getting tired of tightrope walking my father’s back and wanted to get back to bed. “How is that? Feeling better?”

“Yeah, that’s good. Good night”. He rolled around and went back to his customary position.

I went back to bed and thought about the terrible dreams my father had. He was held prisoner in Auschwitz, Buchenwald and Dachau during the Holocaust and lost his parents, brothers and countless more relatives in the concentration camps.

He saw elderly women tearfully forced to dig their own graves before being shot to death.

My father remembers being lined up along with his fellow prisoners in front of Dr. Josef Mengele, the Angel of Death in Auschwitz, to be picked for torturous human experiments and was fortunate to be dismissed.

I’m named after my father’s brother, Andy, who was killed in the death camps when he was only 13 years old, and the peculiar thing is when I turned 13 my mother died. George Bernard Shaw should’ve said that death, not youth is wasted on the young.

I wondered how many times his back had been beaten by the Nazis. How much physical abuse did he suffer from them? Memories like that never leave, and even if you choose to ignore them they’ll always return in your dreams.

With my mother dead and his family gone all he had left were his sons and empty nights devoid of dreams. Money is nothing; dreams are everything.

The year is 1996 and I’m living with my wife in a one-bedroom two-bathroom apartment in the Miracle Mile District of Los Angeles. We survived West Coast earthquakes, make fashions and occasionally play in a band together. We’re always busy in an interior-sort of way.

Our next-door neighbor is Bob, a 79-year old shut-in with thick eyeglasses, a long white beard and a baller cap from Hollywood Park. He loves the racehorses and gets newsletters from the racetrack about upcoming events. He is so rail thin a strong breeze could probably knock him over.

Bob’s very friendly as shut-ins go, however. Once he offered to pick up my wife’s amplifier, which houses two 15-inch speakers, and carry it for her. It must have weighed three times as much as he did, if not more.

If we ever walked by his apartment and he was on his way out the door there would be a struggle getting out, because Bob’s place was so packed with newspapers, bags of untossed trash and boxes and boxes of random possessions. Although no one ever entered his flat, it was said that the place was basically a junkyard that he watched television and slept in.

When the landlady was asked why she didn’t evict him, she said she was told when she bought the building that the proviso in the purchase was that Bob came with the place and couldn’t be kicked out. Since he never complained about anything or bothered anyone it wasn’t a point of contention.

I jumped out of bed to see what the fuss was about. Bob was yelling halfway out his door into the hallway. He was in the throes of a nightmare but wanted to get out of his apartment. I looked at him and his eyes were glassy, not focusing on anything but looking straight ahead as he yelled, “NOT AGAIN! NOT AGAIN!” over and over.

”Bob! Bob!” I said quietly. “Wake up, Bob! It’s okay. Everything’s alright. I’m here”.
His voice faded slowly into a whimper after I repeated myself until he snapped out of it and focused himself at me. “Oh”, he mumbled in a small voice.
“It’s okay, you had a bad dream”, I said slowly. “You can calm down now. You’re awake now”.
“Oh”, he sharpened his vision at me. “Okay…goodnight”.

I wondered later on if he had a bad dream or had a foreboding of what was to come, because six months later he died when his television set fell on him while he slept and crushed his chest. Apparently his TV sat on a cardboard box right next to him as he slept.

Since he lived alone no one knew he had died and we didn’t realize something was awry when we stopped running into him. And then, of course, the smells wafted through the vents…the smell of death. After a week of the smell we called the Fire Department and he was definitely gone.

After Bob’s death the apartment was cleaned out and we rented the space as a workroom/studio to create fashions. Whenever I was alone in there at night I could feel Bob’s presence and never felt like a haunting. After all, I fought off his nightmares for him.

2018. After renting Bob’s apartment as a workroom for 15 years my wife unraveled and left me. I’m now abandoned and alone. I work seven days a week, two different jobs: clerical work on weekdays and delivery work on weekends. I come home late from work and I wake up early the next day.

The money isn’t great, but I earn enough to keep my apartment without suffering the anxiety of a roommate. Unfortunately, anxiety exists in many forms. I live above a pretentious dress shop run by two aging neurotic gay men who constantly scream at each other. They’re old and bitter because they sell granny formals on a youth-oriented shopping street and nobody cares.

One of them is an egotistical Israeli who drives around in an oversized pickup truck and charms elderly women into buying his creations, while the other constantly walks around a whippet who empaths their neuroses and barks constantly.

They’re not a terribly bright couple, so it took them a year and a half to realize she was gone and I lived solo above them. After finding this out they decided to render my ability to get a good night’s sleep impossible. (They liked her but always hated me).

Their workroom is right below my bedroom and they began to work all night with the music turned all the way up. Wired on cocaine to keep themselves awake, they play a non-stop torrent of loud music from 10 pm until 6 am while they work. Manhattan Transfer. Anita Baker. Show tunes. Beyonce. Salsa. Lady Gaga. Sleeping has become non-existent for me.

The music is so loud it fills up all the sound my bedroom. I can’t hear anything from my television because their sound has dominated everything in my room. All I can hear is their horrible music and nothing else.

I called the landlady about it and she rolled her eyes and said, “Call them up and talk to them about it. I’m SURE you’ll work something out with them”.

I called the police five times in one night because they kept promising to send a car over. Nobody came. The police didn’t give a damn. Nobody did.

This never happened when my wife was with me, this was a new attack and they basically had everyone’s blessing. My neighbors didn’t care. I was alone in every sense of the word. Working became difficult; I had trouble staying awake. I suffered from sleep deprivation.

Night after night this endless assault of loud music kept my walls shaking and my floor vibrating with their shitty music. Nobody cared and I had no one to talk to about it. This went on for about a year, and then something interesting happened.

The pilot light in my heater went out. I called the gas company and the gas tech came by and told me that I couldn’t turn the heater on anymore because it was emitting too much carbon monoxide. It had to be replaced. A heater repair man came by a week later and installed a new unit. The heater works even better than before, but with one twist.

My new heater thinks it’s a radiator. It makes banging and kicking noises all night, so while the granny dress couple play their music they hear and endless stream of banging sounds all night. It freaks them out so much they turn their music down and sometimes even turn it off completely.

It doesn’t end there, though. They also hate it when I play cartoon shows on my Bluray player all night, so I put on Rocky & Bullwinkle, Beany and Cecil, Bugs Bunny. Endless screaming, goofy voices, wacky sound effects, Dixieland music with blaring horns, endless cacophony, etc. It makes them mental – sometimes they even bang on my floor to get me to stop. Nothing doing.

They hate free jazz, my favorite kind of music. Archie Shepp. The Art Ensemble of Chicago. Ornette Coleman. Blue Note Records, especially with Elvin Jones pounding the crap out of his skins. I love it, they hate it. It makes their coke ears bleed. They bang on the walls and I sleep through it.

So now I get my eight hours sleep, and yes, I quit the weekend delivery job so I sleep in on Saturday and Sunday mornings. But, alas. The damage is done.

Occasionally the dress couple don’t come in at night and I still turn on the TV and blast it all night. The thought of sleeping in a silent apartment is unthinkable. I need to sleep in my own noise with the television on all night.

There are nights when they don’t even play music anymore, but I don’t care. The TV goes on anyway and it will be loud and stay that way until I get up at 5:30 am. I have become Bob, I am Bob. I’m the crazy old man of the building now and I will listen to my set all night, because it’s the lullaby no one will sing to me. 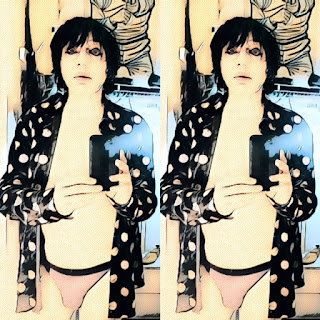