Now Playing ABSOLUTELY FREE on You Tube - Pyromaniacs On Parade 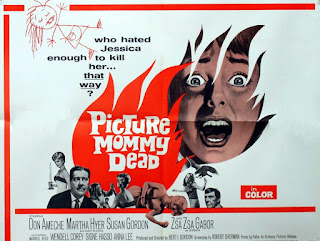 Lately in my sojourns on You Tube I've noticed a few horror-based thrillers that all employ the device of the house fire trauma. This is not an easy trick to pull off, as in they all seem to have the house still standing after the fire and in pretty good shape. The films listed below aren't particularly good, but they're swell trash worth at least one view and definitely chuckle worthy, so let's get started:

Picture Mommy Dead (1966): A teen variant on the old William Castle movies, where the halfway sane person gets bullied into believing they're still crazy and going crazier by the minute (see Strait-Jacket or The Night Walker). Is it as good as Castle? No, but it's still pretty camp.

Susan Shelley (Susan Gordon) returns to the home where she witnessed her mother's fiery death three years earlier, an experience that drove her to madness to a convent-based sanitarium. While she was committed in the institution her father (a buttoned-up Don Ameche) ran off with the governess (Martha Hyer) and married her.

Ameche went bankrupt spending all of his wife's money and has to sell out most of the property at home. Unfortunately he cannot sell the home, as Susan is the legal heir to the property. These details are explained laughably by a highly abrasive Wendell Corey, who speaks in a sort of crotchety William S. Burroughs-style voice.

Susan also happens to know where the late Mrs. Shelley's extremely expensive necklace is hidden, as selling would mean paying off Papa Ameche's extremely sizable debt, but Susan's shock from the fire blacked out her memory of the necklace's whereabouts.

Most of the film is spent with Hyer and brother-in-law Anthony (a hammy Maxwell Reed) scheming on ways to drive poor Susan into mental infirmity so they can have her locked away again and take over the family fortune. There are many scenes involving falcons, phoenixes, and other aviary imagery.

Mommy Dead isn't a great horror film but it's a decent time waster and a genuine oddity. The role of Mommy is played by a silent Zsa Zsa Gabor, who hasn't got any dialogue to utter. It's also funny her hair's dyed red to obviously symbolize fire. And when was the last time you saw a movie featuring the Mattel Scoo-Ba-Doo beatnik doll? 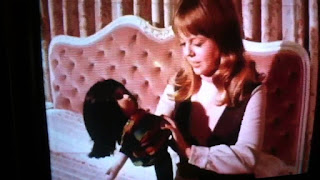 How Awful About Allan (1970): Curtis Harrington directed this Henry Farrell adaptation from his novel. If the name Henry Farrell sounds familiar to you, it should. He's the writer of Whatever Happened to Baby Jane?, Hush Hush Sweet Charlotte, and the next two films with Mr. Harrington, What's The Matter With Helen? and Whoever Slew Auntie Roo?

How Awful About Allan, starring Anthony Perkins, is not as good as any of the films listed above. It's a TV movie and looks it, plus the story isn't terribly involving. It starts with a house fire which killed Allan's father and disfigured his sister, played by Julie Harris. Allan loses most of his eyesight in the fire, with his sanity gone as well, leaving him institutionalized.

Out of the institution and back at home, Perkins is perpetually angry about his blindness, cussing and yelling at Harris in every other scene. It doesn't help that Harris rented out a room to a boarder which Perkins swears is stalking him, a bizarre claim given that Perkins can barely see.

The standout scene in the film is when Perkins loses his shit and steals his sister's car, tearing down the main road, careening wildly all over the place, uprooting trees and knocking over mailboxes with a completely perplexed look on his face. Pretty funny stuff!

It's nice to know that Harrington eventually made better films with Farrell after this one because this film was a hard one to get through. Joan Hackett is the only saving grace in this one. Not one of Perkins' better crazy guy roles! 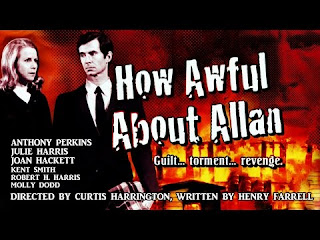 Cure For Pain: The Mark Sandman Story (2011): No, not another horror thriller, but a film which can be seen in its entirety on You Tube. Directed by Robert Bralver as a labor of love, the film charts the short life of the man behind the legendary band Morphine. Being a major Morphine fan I couldn't wait to see this film.

To those not familiar with the sound of Morphine, they were a three-piece consisting of baritone & tenor saxophones played in tandem, a slide two-string bass guitar and drums. Somehow it worked on a Tom Waits "Swordfishtrombones" level. In fact, it helps a lot to listen to latter day Waits to figure out what Morphine were up to.

Bralver's documentary goes into Sandman's childhood with his troubled siblings, nomadic post-teen years, and going up to his early days playing in Treat Her Right. Both ex-girlfriends and former band mates are interviewed with somewhat less than saintly accounts of the occasionally arrogant musician. 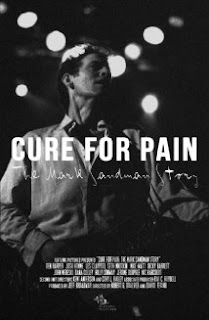 But let's be honest, you're watching it for the great Morphine music and his great singing and playing, which he delivers in spades. The film spends a little too much time recalling his last days playing at an Italian mountainside festival where the air might have been too thin to allow proper breathing for him. A lot of detail is paid to this sad episode.

Again, this is a film that deserves a quick view but isn't terribly gripping, partially hindered by the film's wobbly time line. During the first half of the film it's difficult to figure out what time period people are discussing, because it goes from Treat Her Right days back to his childhood and back again. It can get pretty confusing. Tighter editing and sequencing would have helped.

Still and all, it's pretty great that a Mark Sandman documentary exists, and there are parts that get pretty exciting, but I wonder if that's just something a CD would have accomplished, and a lot quicker, too. 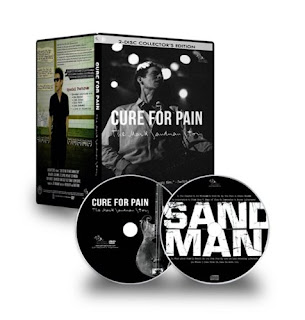