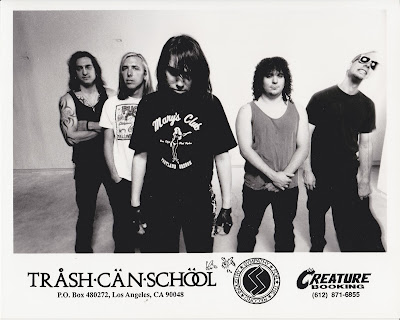 The year was 1993 and that behemoth called grunge rock was going strong, bands with punk backgrounds playing sludgy spluzz with lots of guitar and little else added. Bands like Pearl Jam, Alice In Chains, Soundgarden, Nirvana and many, many, too many others.

I had just completed a tour of the United States with my band Trash Can School and it was largely a success considering many people didn't have any idea who we were. With the momentum of the band gaining its new-found popularity, our record company SFTRI wanted us to go in and record a new album.

Cutting a new album was easier said than done, because A: our previous engineer got a fat head and wanted a hefty producer's fee in addition to getting paid studio time, and B: the album budget was something like $3-5,000, pretty minuscule even by early Nineties standards. To put it in plain English we had to look for a new engineer, studio and they had to be nothing short of amazing.

A fan and friend of the band told us Geza X was in between big jobs and was interested in recording any crazy indie bands. When I said I was interested I asked her to remind Geza that we were in Arthur J. and The Gold Cups together. Geza accepted immediately and he was nice enough to take our poverty row budget like a mensch.

Half the album was not only written in advance but was road tested on our national tour - DT's, TV Blues, Dog Town Girl, Powershred and Steel Purse, to name a few. The other half hadn't been written yet so I had to cobble together at least seven new numbers. The newer songs were Steroid Shock, Big Time Full-On Cop Out, Taxidermist, Volume War and a couple of others.

Geza X's studio was called City Lab and was situated in a house above the Sunset Strip, high above the Comedy Store. In fact, Pauly Shore, Mitzi Shore's son lived next door with his purple jeep parked out in front. Across the street lived Peter Weller, who had a huge, resplendent villa-style home. Not bad for the guy who played William Burroughs and Robocop.

Having Geza as producer was important to me, because by this time the band had fallen heavily under the influence of the Great Pacific Northwest and the Sub-Pop sound, and to me Geza was a kindred soul in the pursuit of strange and unusual sounds, and encouraged me to go farther out than I ever had before.

With the band becoming more musically conservative in their musical tastes it was important to assert my influence on the band by emphasizing even more bizarre sounds than was previously displayed on the first album.

I made concessions toward the trendy grunge sound by writing songs like Taunt, the Ballad of Peter Green and Big Time Full-On Cop Out, but even the latter composition had a quirky Voidoids-style bridge that broke up whatever Mudhoney vibe ran throughout the song. And then there was that atonal saxophone break.

In spite of these concessions I still created walls of discordant noise with a free-form jazz ending to Taxidermist with a wall of guitar feedback. Then there was Powershred, featuring a sample of Sun Ra playing white noise on his synthesizer while a scratch vocal imitating a sax solo made the final mix, bringing some Yoko Ono good cheer to the proceedings.

Steel Purse had a stop and go pulse all through the song, like a demented roller coaster, and for good reason: it was about the Long Beach Pike, a busted-up amusement park where sailors got rolled and gangs got into knife fights and tranny hookers flashed steel, as well.

I also incorporated a great 12-string guitar that Rebecca made for TV Blues and Dog Town Girl. It added a very light touch to the band sound, which we needed badly. DT's had a backwards saxophone track to add to the menacing voodoo drone the band was laying down. I don't think we're in Seattle any more, Toto.

And perhaps that was the big problem in a lot of the fan's eyes (and ears). The album received unanimously bad reviews and even earned the enmity of Papa Bear at SFTRI. He felt he got gypped out of his money because instead of getting Nevermind Part II he got Andy's Wild Years. He'll never realize he got the most original album ever released on his label.

Making a bad grunge album would have been the easiest task in the world but that's not my calling. I made in abundantly clear to everyone that I was dedicated to making the most unusual rock music of its time, and people kept nodding their heads like I was talking drunk again.

Needless to say, the accompanying tour in support of the album was an unqualified disaster, leading up to the breakup of the band. I still listen to Volume War (named after the three guitarists turning up their amps over each other throughout rehearsal until one couldn't even hear themselves anymore) and am amazed at what a great piece of work I created with these guys. One day Volume War will have its day because all maverick works get the recognition they're due. 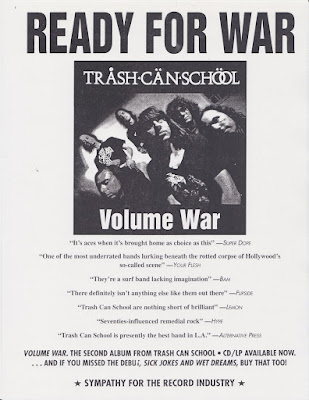