The Pride of Artistic Ownership 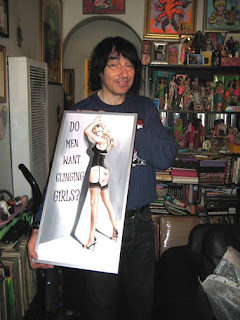 On the other hand, having it live in the flesh in your home is more dynamic than looking at some photo of the same piece. I had a friend who had a prodigious Robt. Williams art collection and none of the magazine and book repros did his pieces any justice. You just gotta see these babies in person to get the full weight of their dynamism.

The funny thing about owning paintings is that after awhile they begin to pile up in your collection whether you intended on being a serious collector or not. I began buying paintings by great artists if they were affordable, and lucky for me I caught a lot of these great works when they were still affordable. 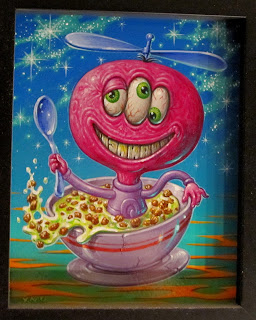 My bout with collecting began while spending an eternity attending openings at Copro Nason Gallery, which at the time was in sleepy Culver City. Always a major fan of the works of XNO, when I attended a show and noticed that his Quisp painting was available at a super cool price I snapped it up right away (thanks, Gary).

I discovered the great art of Sharon Leong when her work was included in a book my wife Rebecca was in called "Vicious, Delicious and Ambitious", compiled and edited by Sheri Cullison. I net her at various shows promoting the book, La Luz De Jesus and once again, at Copro Nason. The content of her art combines bizarre erotica with the snarling menace of vintage dime store paperback novels from the Forties and Fifties. The painting I'm holding pictured above is titled "Do Men Want Clinging Girls?"

Although I couldn't afford any of The Pizz's paintings we managed to work a deal where we could get a few of his master sketches for his paintings in exchange for a handful of Nauga monster dolls we made (we even made a black one for him!). In exchange we got the sketches for Hardware, DT's and The Stoner and The Stripper, all based on songs I've written and recorded. By the way, Pizz was suppose to have painted the cover for my first album, but the record company guy was dead set against it. He thought some shitty blurred Xerox of me was more aesthetic. What a wasted opportunity. 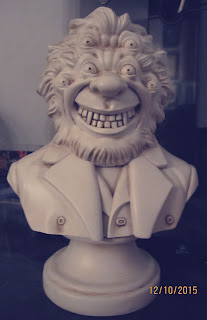 More paintings were acquired: a great Dave Leamon piece of the Three-Eyed Elf Bitch, also acquired at Copro Nason, one I'll treasure forever. Speaking of multiple eyes, I also purchased a brilliant limited edition bust of a Six-Eyed Man by Travis Louie, which was beautifully displayed at the Merry Karnowsky Gallery.

Some pieces Rebecca acquired include a great Lisa Petrucci painting on lacquered wood of a Cowgirl In A UFO, as well as a few Gary Baseman works, given in exchange for the work we did on his Skirball Museum show, "The Door Is Always Open".

Sometimes surprising things happen, like the time Gil Kane's son ran into my friend and bandmate Jack Gould and asked him for a Trash Can School tee, which we appropriated his art. He was so thrilled he got some indie cred on a tee shirt he gave Jack an autographed poster, which Jack let me have. As a Gil Kane fan I was totally honored.

I own a few signed Frank Kozik lithographs, as well, but by now you're getting the gist of what I'm walking about: I never entered this trying to play the grand art collector big shot. It's like they say, if you hang around Hollywood long enough you'll either meet everyone you've ever wanted to meet or become the person everyone wants to meet. Hang around a gallery long enough and you'll eventually get every art piece by every artist you've ever wanted to own. Shazam! 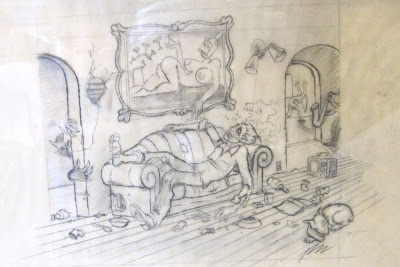 I have much respect for you and Rebecca, and that said, the honor's mine, Andy, i.e., to know that you own a couple of my paintings. Sharon Leong