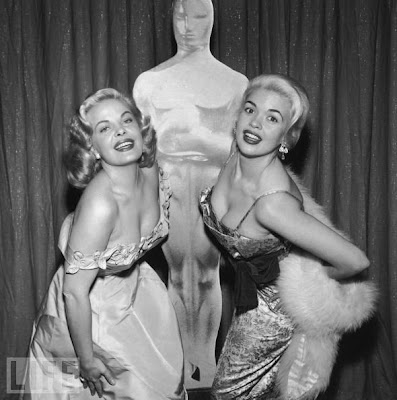 Nine months ago I reported on full movies being available for viewing on You Tube. The variety of films available is staggering: in addition to rare noir gems I've viewed nearly forgotten silent films, obscure foreign classics, garish Italian giallo horrors, and even contemporary films with a twist, like Point Break in French and Looking For Mr. Goodbar in German.

If you're a Hugo Haas fan like me, and don't laugh, Richard Hell and Robert Quine formed a friendship over their love of all things Hugo, then you'll find a treasure trove of heretofore unreleased (on DVD) Hugo gems on You Tube. The best ones generally star his battleship blonde Cleo Moore.

Three films I've recently viewed are The Other Woman, Edge of Hell and the bizarre race drama The Night of the Quarter Moon. As beat as some of Hugo's films look many of them were released by major studios, mostly Columbia Pictures and a few from 20th Century Fox. Here's a small rundown of what you can catch on YT: 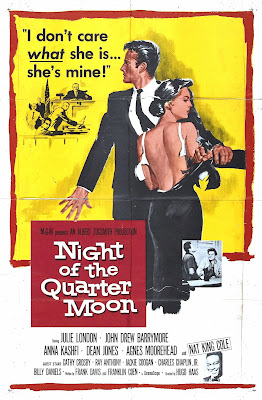 Night of the Quarter Moon (1959): One of Haas' last directed films, this sports a top-notch cast which includes Julie London, Nat King Cole, Jackie Coogan, Disney star Dean Jones, and Agnes Moorehead. Unfortunately it might be one of the worst films I've ever seen.

If I followed the film properly, and yes, it is confusing, Ginny Nelson (Julie London) gets her windows smashed in by some racist punks. Hubby Roderic Nelson (John Drew Barrymore) gets a call at work about the vandalism and races to the scene of the crime to stop the carnage. The police appear from out of nowhere and arrest Barrymore even though the punks are still brandishing bricks and rocks.

This is one of those movies that are supposed to wind you up because the bad guys just can't stop winning and the victims can't stop losing. Because London is "colored" she seeks the advice of attorney Nat King Cole, whose first recommendation is to "forget it". What the fuck???

The film can't make up it's mind what London's ethnicity is, either: first we're told she's black (!) and then we're told she's Latina. The films keeps flip-flopping about her being Latina and then going back to her being black. No question Miss London is a ravishing woman, but she's as Caucasian as it gets.

London spends half of the film building her court case against Agnes Moorehead, playing another cunty mother-in-law like in Bewitched and trying to contact her mentally ill husband, now sequestered away at Mama's house and forbidden to speak to Julie.

The film ends with an intense court battle which results in a lurid display meant to bolster London's case. I won't say what it is, because it's so stupid no court on planet Earth would entertain it. But Hugo Haas probably thought this was powerful stuff. I'm still trying to figure out what race Julie London was supposed to play. 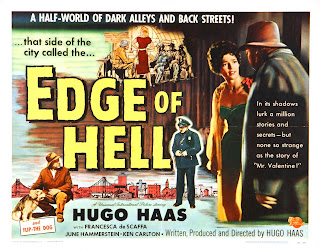 Edge of Hell (1956): Hugo plays Valentin, a former Russian star of the theater, now reduced to living in the streets of New York on the bum. His only bread and butter is Flip, a scruffy dog who performs ordinary circus tricks like hopping around in a circle (wowie zowie). All through the picture Valentin spouts his philosophy on life to both his hobo pals and his rich clients - more on them in a second.

Edge of Hell follows Valentin through his daily life full of homeless whimsy, cloying and cute with bums who wouldn't hurt a fly. The squeeze play happens when Valentin brings Flip to a rich kiddies party to entertain the brats. After getting paid a paltry $20 for entertaining the snot noses and it's time to split the shindig, the rich birthday boy breaks down and demands that Flip stay at his plush home.

Dad offers Valentin $500 for the dog and with asthma attacks hitting him by the score and an eviction notice (he lives in a cold basement) hanging in his face, will he sell his pride and joy Flip or die on the cold streets of New York? Despite the noir title there ain't much noir going on here. 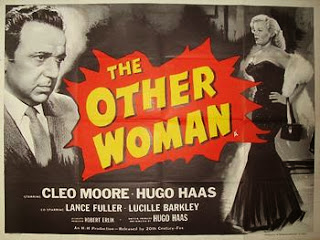 The Other Woman (1954): Noir all the way, and this time Cleo's on board doing what she does best. Cleo's plays Sherry, an untalented bit player who can't act her way out of a paper bag. After getting kicked off the movie by director Walter Darman (Haas), Sherry's madder than a wet hen and devises a scheme to get even with Darman.

Begging Darman to come over her place to prove there's no hard feelings, he finally relents and has a few drinks with her. Passing out from all the booze, he eventually wakes up to some fish story from her about how they had a night of sex.

Since Darman's a married man she starts with the blackmail phone calls, demanding he pay $50,000 ASAP or she's going to tell all to Darman's wife with a few muddy, dark photos. Since Hugo can't scrape up 50K to shut her up he makes plans to have her ass offed.

Ironically this is the best of the three Haas films; shot on a shoestring budget with cookie-cutter plotting, Haas proved his best work was in cranking out simple noir films. Everything else just paled in comparison, and Moore seemed to make everything work. As John Cale once sang, simple stories are the best.

The prominence of You Tube is more robust than ever, largely due to alternative video services' poor decision making: satellite television providers with increasing their monthly service fees - ours was $100 a month for basic service which we dropped a year ago; and video disc rental services like Netflix, who dramatically slashed their catalog of films without rhyme or reason. These bad decisions ironically opened up a large playing field for You Tube to actually grow and flourish in ways in all its years as a website. 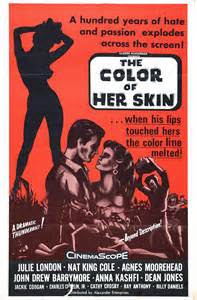