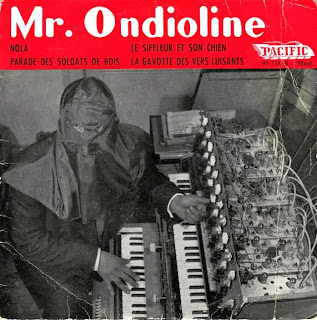 One of the most fascinating periods in the history of pop music was the electronic revolution in the late Sixties, most notably the inauguration of the Moog synthesizer in pop music. Very few revolutions in music disturb the record buying public: punk rock, for example, rap when it really mattered, but arguably the synthesizer might have been the most radical.

Just when rock music was getting set in its ways in 1968 with Cream and Jimi Hendrix-influenced long guitar solos, drum solos and rock operas a bizarre classical album by Walter Carlos and Benjamin Folkman called “Switched On Bach” was released and proceeded to sell half a million copies. Robert Moog’s delightful instrument had arrived to the mainstream public and they responded in alternate shades of delight and horror.

Horror because the synthesizer wasn’t considered a warm instrument by many seasoned musicians, who seriously believed at the time that it was a cold computer set out to replace real musicians. To a certain degree this has actually happened, but at the same time we’ve heard the synth long enough to understand that it can also enhance what real instruments do, and beautifully.

Prior to Bob Moog’s invention there were several electronic keyboard predecessors that made their way in pop music, most notably; (i) the mellotron, all the rage in prog music with bands like King Crimson and The Moody Blues, and; (ii) the ondioline, invented in France by Georges Jenny in the late Forties which could emulate the tone and pitch of any conventional musical instrument. 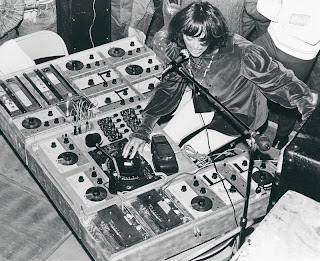 But it was the Moog that created the biggest splash and controversy when it hit the scene. The emergence of the synthesizer almost appeared to be a logical response to the ubiquitous psychedelia that was all over pop music at the time. Finally, here was a keyboard that sounded so psychedelic it would put any fuzz guitar sound to shame. It couldn’t have come at a more auspicious time in musical history.

Once the synthesizer became employed heavily in rock music it was utilized in either one of two ways: (i) as a legitimate keyboard playing conventional melodies, as Emerson, Lake & Palmer did in 1971, or (ii) as a wallpaper of musique concrete, as The Monkees did with “Daily Nightly” in 1968, or Eno’s work with Roxy Music in 1972.

The Silver Apples were a two-piece band from New York featuring a guy named Simeon (pictured above) playing his invention named, what else, The Simeon, and a drummer who played a 13-piece kit (!) with five cymbals – this is pre-heavy metal, remember. Diagrams of both the Simeon and Dan Taylor’s drum set up were both printed on their great CD set. 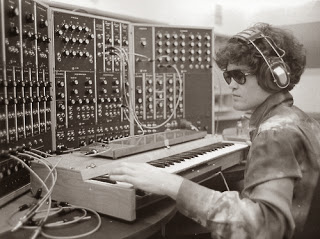 Silver Apples sound not unlike another New York band, Suicide, with droney oscillations playing repetitive hypnotic melodies while Simeon sings in that dreamy voice Alan Vega made popular. Just to keep things down to Earth there’s an occasional banjo plunking in the background and it sounds just as exotic as The Simeon.

Fifty Foot Hose came around the time of the San Francisco explosion (1966-1968) and featured a great singer named Nancy Blossom. What made them stand out from the rest was a unique electronic instrument invented by band member Cork Marcheschi made up from combination of elements like the theremin, several fuzzboxes, a cardboard tube, and a speaker from a World War II bomber. To the average listener it sounds like a synthesizer.

Fifty Foot Hose released one album, “Caludron” on Limelight Records which also released “The Minotaur” by Dick Hyman, which I wrote about several years ago. The most popular track from Cauldron is the slow dirge rocker “If Not This Time”, which did well on FM radio back in the day.

While Fifty Foot Hose and Silver Apples came off as serious and dramatic there was also the more playful bunch like White Noise from England. In June 1969 White Noise, fronted by David Vorhaus released the groundbreaking album “An Electric Storm” on Island Records. The album was created using a variety of tape manipulation techniques, and used the first British synthesizer, the EMS Synthi VCS3. 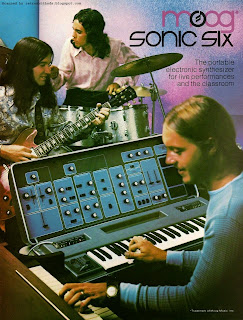 Annette Peacock released an equally innovative album in 1971 on RCA Records titled “I’m The One” that deftly merged jazz, funk and electronics (from a Moog prototype given to her from Mr. Moog himself). There’s some great electronic treatments used on her voice, especially on her unique cover of Elvis Presley’s “Love Me Tender”. Annette Peacock pretty much paved the way for artists like Tara Busch to flourish today.

What makes all these artists so special was their dedication to creating new sounds and risking commercial failure and critical disapproval – yes, even critics showed absolute contempt for electronics for years. The role of the artist is to continuously explore, discover, innovate and show us the way of the future, not follow old paths.

The artists listed above and many others not mentioned (like Perrey & Kingsley, Curved Air, Bruce Haack, etc.) were pioneers of electronics and have left behind a legacy of brilliant electronic sounds for us to enjoy forever. 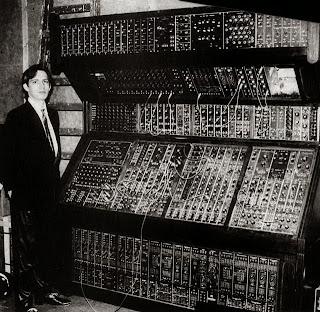