Hail To The Cheese (The Hip Chicks No. 5) 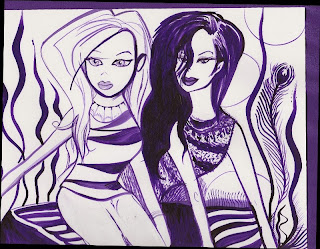 Ellie and Millie, the Skooby Dooby Sisters, planned to celebrate President’s Day in the most presidential place in the USA, Washington DC. They boarded a squaresville Greyhound Bus from their Bohemian digs in Manhattan, Greenwich Village to be exactarooni, and headed to the Nation’s capitol.

Playing chess using a standard sized board on the bus proved to be quite a challenge. Every time the bus driver cut a wide turn the chess pieces would slide across the board, some even rolling across the aisle under people’s feet.

“Man!” Ellie tossed her blonde hair. “Who goofed?”
"My rook just split the scene! Crazy, baby”, Millie scratched her auburn rat’s nest of hair.
"How long will it take for us to get to President land?"
"Another four and a half hours, sister".
"But, baby, we've already been cooling out in this sled for half an hour. Man! Can't this bus make like a rocket and blast off?"

They both banged their moccasins impatiently against the floor, in addition to rating disapproving stares for their velvet trousers and floral tunic blouses. The snooty riders were worn-out women in dull house dresses and pipe smoking men in moldy suits with porkpie hats. How bland they looked against the colorful highway seen beyond the bus window. One day color would win the war against black and white, but not during the sensible Fifties.

"What state would you like to be born in?"
"Ohio, of course. There have been more presidents from Ohio than from any other state in the country".
"Ohio is never square. It's round on the sides and high in the middle".
"I dig, baby, I dig".

Their banter over the Presidents went well on until the end of the ride, guaranteeing them a quick exit from the bus just to shut them up. They didn't care because the sun was out, the birds were singing and Washington was making with the crazy cherry trees all over town.

Walking through the town, Millie's eyes glazed at the canopy of pink trees that enveloped them.
"Man, it's like cotton candy antennas can you dig it?"
"I dig the scene, sister".
Their heads spun around like spinning tops with ratted hair and lipstick.

"There's the FBI Building!"
"I see the Capitol! All those square cats are probably raising taxes in there right now!"
"Crazy!" 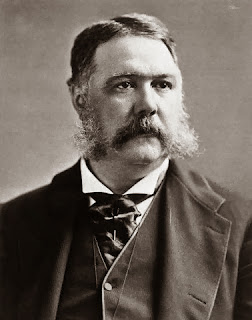 Gray haired men in suits puffing pipes carrying briefcases were staring at our freaky hipster girls. All was fine until the girls walked along the Potomac and neared the Washington Monument, where they saw a bald man in horn-rimmed glasses wearing a striped coat and a straw hat holding a placard and screaming, "IMPEACH EISENHOWER!"

He had cymbals attached to his legs and a harmonica holder on his shoulders. Every few seconds he'd lock his legs, smashing the cymbals. He hollered, "IMPEACH THE PRESIDENT!" a couple times and then blow a tuneless blast from his harmonica. BLEEP BLEEP BLEH!

Every time he'd blow his harmonica the lenses of his horn-rimmed glasses would fog up like a car windshield in a snow storm.
"That's one beat musician, Millie!"
"Yeah, he'd really make the scene at The Screaming Bean!"
The bum's ears perked up when he noticed the girls approaching.

"Ladies, ladies. Did you know that President Dwight David Eisenhower is really a Communist spy just like J. Edgar Hoover and they've been wire tapping my house and Mamie Van Doren's house too?"
"Wild, Daddy! Lay some more of that dingy harmonica rebop on us!"
BLEEP BLEEP BLEH!

"Girls, girls, girls! Spread the word! President Dwight David Eisenhower and J. Edgar Hoover of the Federal Bureau of Investigation are plotting and planning on kidnapping Mister Arthur Godfrey and cutting his tongue off and cutting out his brain, we must -"
"Why?"
"Because he knows too much!"
"Wild! I thought they'd get Steve Allen first".
"No, no, no, no he's next. And then they're going to kidnap Tennessee Ernie Ford and shoot him off in a space capsule!!"

"Dragsville!" they said together.
"Girls, call the Washington Post before it's too late. This is HIGHLY CLASSIFIED information".
"Blow some more harp, Daddy!" Ellie hopped up and down, clapping her hands.
BLEEP BLEEP BLEH!

Millie frowned. "If I knew there'd be a jam session at the Washington Monument I would've brought my finger cymbals".
"And my bongos".
"HOOVER IS A COMMIE!" the man yelled to no one in particular.

"Hey, Dad, could you tell us where we'd go to find the Grover Cleveland Women's Club, or the Ulysses S. Grant Social Hall?"
The man's body stiffened, his face became glassy eyed, and then he mechanically pointed ahead to the west.
"Go yonder. As it says in The Bible!" 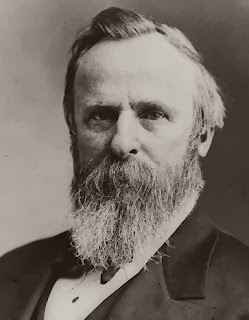 The girls walked awhile and stopped in front of the Jefferson Memorial. There was a small group of shaggy college students marching up and down in front carrying placards screaming, "BAN THE BOMB! BAN THE BOMB!"

"Dig it baby, these hepcats are protesting and they're not blowing any mouth harps either".
"NO MORE ATOMIC BOMBS!"
"What about Steve Allen? Or Tennessee Ernie Ford? Isn't that important too?" Ellie asked.
"NO MORE TRINITY! NO MORE LOS ALAMOS!"
"Where's Grover Cleveland?" Millie asked.

"Millie? Ellie? Are you girls here to protest the A Bomb, too?" a young man's voice chimed behind them. They spun around, and it was -
"SCRUFFY!"
Yes, it was their Village crush, Scruffy, young beat stud Sterling Holloway Scarborough IV, black-haired with a neatly trimmed goatee and dressed in his black sweater and blacker chinos. "Did you girls say you wanted to hear some music?" He picked up a flute and started blowing some cool Mingus lines. Mulligan would have approved.

Ellie went into her wild interpretive dance to the flute playing. The college kids kept up their protest.
"NO MORE NAGASAKI! STOP THE BOMBS NOW!!!"

Millie walked carefully past the protesters and went inside the monument, reading the inscription about life, liberty and the pursuit of happiness. She pulled out a bag of almonds, ate one and felt stuffed. She liked the Jefferson Memorial just fine but thought it would have been a lot better if it had a Martin Van Buren statue instead. 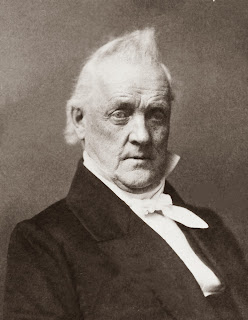 Presidents pictured above: Chester A. Arthur, Rutherford B. Hayes, and James Buchanan. Lead illustration by Rebecca Seven.
Posted by Andy 7 at 6:30 PM