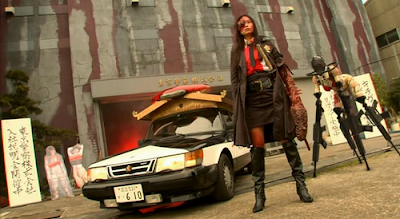 If the Chinese dazzled us with creepy psychic horror films like The Ring and The Eye, then Japan responded with insane, erotic fetish, over-the-top gore with humor to spare movies. The most sensational output comes from a genius make-up and special effects artist, Yoshihiro Nishimura. Nishimura references Salvador Dali as one of his biggest influences in the way he depicts distorted body parts in surreal settings. His sci-fi/horror classic, “Tokyo Gore Police” has enough erotica and surrealism to make Dali beam with pride. It serves up outrage the likes of which hasn’t been seen since the college revival house theater days of Jodorowsky, Makavejev, and crazy Fernando Arrabal.

Tokyo Gore Police is the story of Ruka (Eihi Shiina), a police officer for the Tokyo Police Corporation, a now-privatized police force who excels as an Engineer Hunter. Engineers are serial killers who have the ability to make their severed body parts morph into deadly weapons, whether it’s a chainsaw or a sawed-off shotgun, all courtesy of a mysterious stranger dressed in black named The Keyman (Itsuji Itao). It’s up to Ruka to find The Keyman and stop him from his evil task. Unfortunately, Ruka is a flawed person herself, a cutter who inherited her bad habit from her mother to punish herself from not preventing the murder of her father.

Just like Jodorowsky, though, the plot is almost secondary to the Garden of Surreal & Erotic Outrage breaking up the plot from time to time. In between action scenes you’ll be treated to:
1. Blood showering out of a severed limb like a wedding reception fountain.
2. Chainsaws flying straight into a man’s mouth and ripping open his head.
3. Commercials hawking cool cutters for teenage schoolgirls with cute colors and promising it makes “blood taste better”!
4. Punk kids on the subway chuffing down live earthworms and night crawlers. Yum!
5. Amputee leather slaves walking on prosthetic legs made of samurai swords.
6. The Keyman’s severed upper head grows two gun barrels that shoot out bloody ginsu knives.

Ruka’s colleague, Officer Barabara-Man (Jiji Bu), decides to let off steam by going to a kinky S&M club that specializes in back room sex with mutant girls, like a Snail Girl and a Girl with Crocodile Jaws Snapping Between Her Legs. Whoa! He picks Door Number 2 and gets the girl with the croc jaws who bites off his dick, which naturally provokes another Wedding Fountain of Blood. He gets the Engineer Key and needless to say, his empty crotch morphs into humongous red cock cannon! He takes his Gigantor cock cannon and goes berserk at police headquarters, firing deadly cannonballs at his fellow officers. 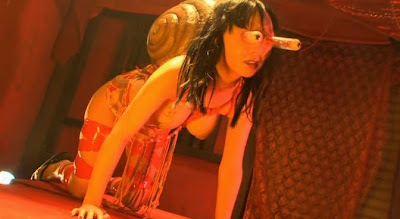 Ruka finally corners the Keyman in his crummy apartment, and instead of killing her confesses that he’s the son of the Police-sanctioned hit of her father, executed at an anti-police privatization rally. His father also killed by the now-privatized Police Corporation, he devoted his life as a genetic scientist by injecting himself with the DNA of psychotic killers like Ed Gein and Charles Manson, all bottled up and labeled in his laboratory. That’s right, another Mad Scientist movie! To Ruka’s horror she’s trapped by him with an Engineer key installed in her against her will.

In the meantime the Tokyo Police Corporation has gone completely batshit crazy and begin arbitrarily torturing and murdering citizens en masse, so Ruka hits the streets with her newly acquired Engineer mutation, one crocodile arm which rips the face off a policeman’s head. Now that Ruka knows who the fascist madman behind her father’s murder is she has a final showdown with him using her best samurai sword skills and that badass crocodile arm.

Tokyo Gore Police ends with the Tokyo Police Corporation no longer privatized, with the slogan in big screaming letters: MORE GORE COMING SOON! Love it or hate it, Tokyo Gore Police is punk as fuck and makes no apologies about itself. It’s easily the only movie that can kick any video game’s ass with a cock cannon around the block! 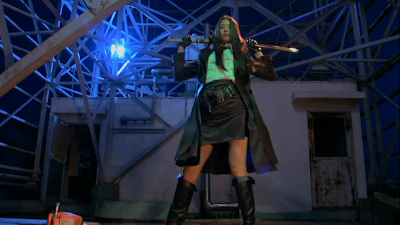 Also recommended: THE MACHINE GIRL, almost as demented as Tokyo Gore Police and well worth your time.