The Scooby Dooby sisters, Millie and Ellie were oblivious to the fact that it was the third Thursday in November. Millie industriously painted a stiff, wooden chair with Duco house paint. At first she applied a red coat but then decided to go abstract and add small slashes of yellow and green, making the Jackson Pollock scene. Ellie busied herself brushing her hair 100 times, a favorite pastime particular to blonde girls.

Millie found herself stuck to her paint brush as her hair got stuck to the quickly drying paint on the brush. "Ow! Not cool! Sis!!"
Ellie found herself in a similar predicament when her brush got deeply tangled in her hair and she couldn't pull it out anymore. "What a drag! Sis!!!"

Millie raced over to her sister with a big paint brush dangling from her hair like a clunky ear ring. "Help, my branches are all stuck!"
"Mine too!"
Ellie began pulling the paint brush out of her sister's hair as Millie reached over to pull the hairbrush out of her sister's head. Both of them twisted and cussed as their groovy crash pad door opened and their rich, fat, gray-haired mother strode in wearing her customary pill box hat, silver fox mink stole and Cartier pearls.
"Oh, girls, what foolishness are you up to now?"
"Mother!!!" they wailed at the same time.
Mother Huntington rolled her eyes and grabbed a rusty butter knife from the kitchen. "How many times have I told you girls to cut that monstrously long hair of yours? Oh well, I suppose this'll do. Once I cut your hair and you change out of your rags you're coming home for Thanksgiving dinner".
"Mother!!" they both wailed. 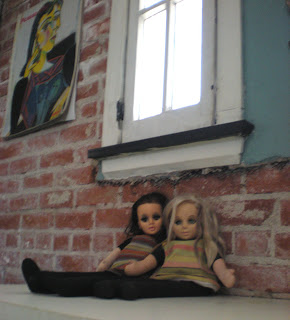 Although Millie and Ellie were hip, card-carrying beatnik sisters they were strictly trust fund brats and had to put up with occasional inconveniences like family get togethers, i.e. Thanksgiving dinner. The dinner was held at the Huntington family's stuffy Park Avenue penthouse with the gray-haired squares sitting at the large dining room table and the youngsters sitting at the tiny Japanese-style table.

"Hubert's closing a highly lucrative account in Tokyo, even as we speak. They're selling low after that terrible war", Mother Huntington told the guests. "We're doing our part to help those unfortunate little Buddhist peasants". The guests nodded, grunted with a few "here heres" and sipped their expensive wine. There were several candelabras at the table even though the dining room had the brightest chandelier money could buy.

"Bodhisattva bebop", Ellie whispered to Millie. "Dad's making the Buddha scene".
"I dig, chick. I'm just jazzed Mom didn't get a chance to slash all our weeds".
"Zilch, baby. As soon as she copped my locks off that crazy brush I split out of the pad".
"Me too, baby. And she didn't get a chance to flip our threads, either!"
They both giggled, but Millie quickly frowned when Grimly the butler placed two heaping plates of Thanksgiving dinner in front of them.

"What's with the feast? Maaaannnn!"
"Hold the banquet, baby, I don't dig".
"Thanksgiving dinner", Grimly announced, "Per Lady Huntington's request". He dashed away, disgusted by the scruffy debutantes sitting Indian style on the floor by their meals. He looked back and caught a sight of Ellie taking off her moccasins and shivered with disgust, dashing into the kitchen.

Millie began industriously building an abstract sculpture out of her mashed potatoes and stuffing, building an upper tier of yams and stacking the rooftop with slabs of turkey.

Lady Huntington glanced over at her daughters' kiddie table, did a horrified double take and stopped her dissertation on Coco Chanel's latest collection.
"Millicent, what on earth are you doing?" Everyone at the adults table stared at them with smarmy disdain.
"I call it 'Ode To A High Rise'", Millie tossed her hair proudly. "Isn't it the most?"
Lady Huntington turned three shades of red and roared, "Child, you'll be the death of me yet!"
"Must they be here? The air has a faint...aroma...of narcotics", a silver-haired man with an enormously red face burbled.
"That's patchouli, Gramps!" Millie purred.
"Oh, alright, get out. Oh, these unruly children!" Lady Huntington poo-hooed.

"LET'S SPLIT THIS WAX MUSEUM!" Ellie grabbed Millie's hand and they promptly walked out the door, but not until Millie stopped at a bowl of fruit.
"Wax fruit!" Millie smirked, "You cats must be putting us on!"
"OUT!!!!!!" 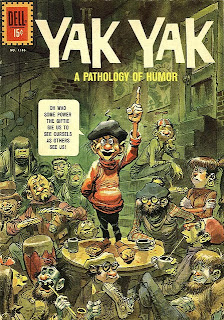 Millie and Ellie made a detour home to their favorite coffee house, The Pony Espresso, where coffee, chess, and their hipster crush Scruffy worked. Dave Brubeck was blasting on the hi-fi and a few scattered beats were sitting around reading poetry and sketching with plates of food by their side.

"Dig that grocery store rebop, Sister", Millie whispered to Ellie, "Is today Food Day?"
"Gadzooks", Ellie scratched her head, "Foodarama, like feast-a-rooni".
Scruffy ambled up to them as they sat down at a table.
"Aloha, chicks", Scruffy brought over a tray with two espressos, the way the girls liked it, hot and strong. They thought Scruffy was hot and strong, too. "Got some atomic bomb juice, on the house".

Millie grabbed a chess board from the book case in the corner as Ellie asked Scruffy, "What's with the food scene, Daddy? I don't savvy, Pappy".
Scruffy stroked his groovy goatee and said, "You don't dig, Baby? Today's Thanksgiving Day. We give thanks for giving and today I'm making with the banquet scene".
"Coolness! Lay it on me, Hepcat".
"Grab a plate and pile on some grub - it's on the pub".
"Solid!"

The two girls ambled over listlessly to the buffet table. Ellie put two cubes of yam, three teaspoonfuls of cranberries and half a slice of pumpkin pie. Millie piled on a tablespoonful of bread pudding and half a slice of mince pie. She grabbed three pecans for later if she got hungry.
"I'm gonna get so stuffed", Ellie mumbled.
"I dig, like my plate is jammed like Grand Central Station", Millie peered at the meager helpings.

They put their food down and started playing chess. Scruffy walked up and said, "Happy Thanksgiving, chicks".
"Yeah, like Happy Thanks for Giving, Scruffy. You're the most and squares are toast".

An old math professor came in and started reciting some way out poetry about the Mayflower and Pocahontas being a real gone squaw and the pilgrims wearing those crazy toppers and the two girls felt warmer than they felt in months. The food grew cold on their plates but they couldn't guzzle their coffees fast enough! Like, Endsville. 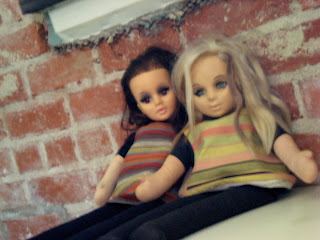