Kiss The Cook, Bang The Baker 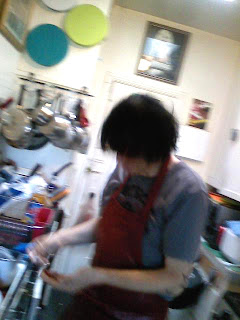 Call it a mid-life crisis, call it whatever you want, but I’ve been possessed by a new obsession and it’s baking. I’ve always loved freshly-baked bread and live right by one of the greatest artisan bread bakeries in California, La Brea Bakery. Consequently, the thought of baking my own artisan bread was exciting to me. I stayed away from supermarket mixes like Pillsbury but dabbled with Duncan Hines and Ghirardelli mixes just to get oriented.
Insofar as baking bread, I bought a Rosemary & Basil Ciabatta mix and it turned out okay but I wanted to get more radical. I went on the internet and printed out baking recipes from thefreshloaf.com, a site dedicated to artisan bread baking and has a pretty awesome forum where people trade bread baking tips.

My baking obsession continued with classes at Sur La Table at Hollywood’s legendary Farmer's Market. In the dead of summer I slaved over a hot oven learning how to bake focaccia, braided challah – which reminded me of The Wicker Man because that’s how a challah is designed, and pumpernickel, which is considered in some circles as an artisan rye bread. 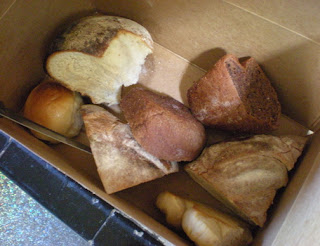 You can buy millions of cookbooks but until you’ve attended a few cooking classes you’ll never really learn how to bake bread properly. At my classes I learned all the appropriate tools used for baking: the dough scraper, the standing mixer (for making dough), much faster and more efficient at mixing, egg wash, pizza stones, etc.

The classes also provided valuable perspective on the chemistry needed for successful baking, case in point being that yeast is a bacteria, so using iodized salt will kill the bacteria, so always use kosher salt. For the very same reason distilled water should be used and not tap water, tap water has fluoride, which also kills bacteria. You don’t want to fight yeast, you want to allow it to work in the production of baking. 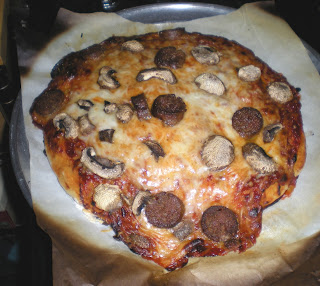 PIZZA: Pictured above is a pizza that I baked with dough seasoned with basil and sprinkled with olive oil. I used a store bought pizza sauce (sorry) and topped it with parmesan and mozzarella cheeses, mushrooms and lamb sausage to give it a wonderful Middle Eastern accent. I made enough for two pies, both of which were demolished in less than a week. 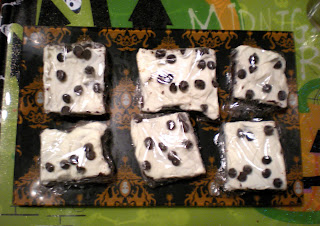 DESSERT: Pictured above are double fudge brownies with vanilla topping and semi-sweet chocolate chips to give it that Las Vegas dice effect. 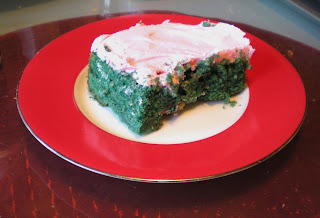 Pictured here is a Punk Rock Spice Cake, where I baked a Betty Crocker Spice Cake mix and put in some blue food coloring making the brown cake mix turn green (!). I topped it with pink strawberry icing and even threw in some raisins to make it extra chewy. This one got chomped pretty fuckin’ fast, too.
The kick in baking your own stuff is that you can be as inventive as you want. My Lamb Sausage Pizza was a big hit and it still conformed to the classic pizza format. My next project will be a Green and Red Pesto Pizza with big buffalo mozzarella clouds and I’ll be baking that next weekend. Call for samples!
Posted by Andy 7 at 5:00 AM

Hi Andy - always great reading your blog. Tell me if you're ever having a bake sale or need an extra person to try out your newest bread/pastry, I'd be happy to come by. :)
-Auralynn

Haha thanks. There might be a baking party in the nearby future.