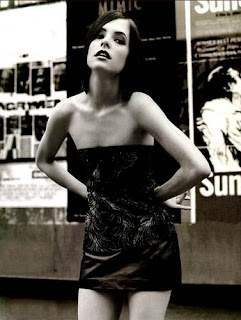 Every year I wish a fellow Scorpio a Happy Birthday; last year it was Alain Delon so this year I’m wishing a Happy Birthday to Parker Posey, one of my favorite actresses. A sort of modern day Louise Brooks (another Scorpio), instead of kids creaming over Audrey Hepburn they should be checking out every cool movie this nut ever starred in. She even put in an appearance in “The Coneheads” movie early in her career.

Born on November 8th, the daughter of a car dealership (“Posey Chevrolet”) mogul in Mississippi, Posey began her career acting in soap operas like “As The World Turns”. Tiring quickly of zooming tight shots before commercial breaks, Posey got small roles in movies, the most memorable (besides “Coneheads”) being in Hal Hartley’s brilliant “Amateur”, playing a punk chick commenting on the electrocuted state of a computer wizard. She looked more punk rock than most Lower East Side club girls, which probably explains how she got her big breakthrough role in “Party Girl” (1995), the funny film about a Lower East Side club girl who sets out to prove she can be a serious librarian. The standout scene is when she files all of her DJ roommate’s records in the Dewey Decimal System. (“100-200” is Jungle Music, “300-400” is Drum & Bass, “500-600” is Trance, “700-800” is House Music, etc.).

After “Party Girl” broke she became the unofficial queen of independent films in the Nineties. Other weirdo films soon followed, like “Drunks” starring Richard Lewis who tried to kick the sauce monkey by attending AA meetings, where Posey’s a member in group. “I wanted to slug whiskey just like Janis Joplin”, brags Posey with a silly, blissful grin. One of the most memorable aspects of the film was the way “I Must Be Mad” by The Craig kept playing through the movie. Weird! The cast was surprisingly star-studded for such a low budget production (Faye Dunaway, Calista Flockhart, Kevin Corrigan, etc.), but Posey steals the show.

More indie movies followed, “Dazed and Confused” (Linklater), “The Doom Generation” (Araki), and “Basquiat” (Schnabel). Her next really big picture was Christopher Guest’s brilliant “Waiting For Guffman” playing the girl from the local Dairy Queen who thinks “Red White and Blaine” is her big ticket out of town to Broadway.

Other films included “The Daytrippers” about a family who pile into their station wagon and plow through Manhattan trying to find Posey’s estranged brother-in-law and find out why he bailed on her sister (played by Hope “American Splendor” Davis).

There was also “Clockwatchers”, a great ensemble comedy co-starring Lisa Kudrow (hitting the indie movie circuit herself) and Toni Collette. The film is about a quartet of frustrated office temps waiting for something bigger to come along in their lives. The only one who appears to be a “lifer” in the temp game is Posey, whose jadedness and sarcasm gets her through the crushingly dull routine of temp work. This is easily one of her best performances to date.

She followed that with Hal Hartley’s “Henry Fool”, an utterly bizarre tale of a garbage man named Simon Grim who takes to writing pornographic poetry and finds his muse in the form of a drunken, philandering scoundrel named Henry Fool who in the course of staying at Simon's home manages to bugger both Simon’s mother and sister Fay, brilliantly played by Posey.

Big money-making movies soon followed for Posey, starring in high visibility jobs like “You’ve Got Mail”, “Scream 3”, and “Josie and The Pussycats”. By 2000 Posey was still starring in great indie pictures like “Best In Show” playing a neurotic yuppie dog owner. “Personal Velocity” was the brilliant story of a book editor who finds herself behaving more and more like the father she detested, realizing she has his arrogance and uses it to mercilessly step up in her career.

In “Fay Grim” she reprises her role from “Henry Fool”, now abandoned by Henry and notified by the CIA that his terribly written memoirs was really a code book for international terrorists, hiring her to track him down. A deadpan comic version of “The Third Man’ with Fay as the Joseph Cotten character and Henry as Harry Lime soon follows. This one was pretty strange, but again Posey turns in a stunning performance.

It’s hard to imagine catching all of Parker Posey’s movies, nine times out of ten you’ll end up finding them on IFC or The Sundance Channel, and when you do you’ll be watching an actress with her own unique sense of style, wit and humor. And, if anything else, she was the coolest judge in “Project Runway” history. 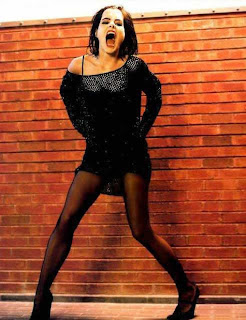 Thanks for the Parker Posey tribute.
I'll watch anything she is in except Josie and the Pussycats.
Love the photo choices!

I had some friends that walked out on Josie and The Pussycats and had the nerve to demand their money back at the box office. Like you didn't know this was going to be the biggest pile of crap ever. What idiots.