Speak Of The Devil 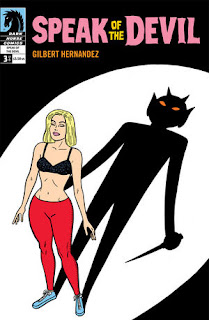 Every day when I drive home from work on the way home I see this teenage couple locked in a passionate embrace kissing against a fence, making out against the bars like its a matter of life and death. They're always at the same spot making out at exactly the same time, you could set your motherfucking watch to it, it's uncanny. It got me to thinking, what if they actually missed a day together, would one of them snap, would the boy snap first or would the girl snap? Will they eventually quit making out and marry, or will they just die like dried out flowers? But I digress...

There's a disturbing, violent piece of work by Gilbert Hernandez titled "Speak Of The Devil", which attains a nightmarish tone that never lets up once. A creepy Peeping Tom wearing a monster mask stalks the neighborhood watching the neighbors having sex. By Page 13 we realize not only is the Peeping Tom a teenage girl, but the local high school gymnastics champion! Beautiful, talented, and admired by her peers, she leads a perverse private life. To add insult to injury, the couple she peeps on is her father with his girlfriend, Linda! Another window she peeps in is her emo boyfriend Paul's house, watching her love getting periodically beaten by his bully father, constantly chiding him for being a "pencil-neck faggot". If he only knew.

Things get sicker, though: Paul discovers Val's secret obsession, and they make love in a cemetery. Soon after Val injures herself out of the gym championships (a reversal on the Samson and Delilah lovemaking turning to vulnerability?), hobbling around on crutches and cheering on her physically inferior classmate, Patty. If that isn't demoralizing enough, she comes home to catch Linda making it with her boyfriend, Paul! Val loses it and tries to kill them both, but they surprise her by attacking her. They decide to form a terror-laden menage a trois, the first victims being Paul's parents, blinding them before cutting their throats.

The trio decide to relax after the killing by hanging out at the beach, but not without killing an innocent woman and taking her wallet. They cut the eyes out of more innocent people just for kicks, hiding in a hotel and pretending they were abducted to cover their tracks. Val, jealous of Linda's control over her Dad and Paul, tries to convince him that she has to be killed before she turns them both in. Val, sensing trouble, leaves the couple and spins a yarn on the TV news about escaping "The Abductors". Paul begins moping about her absence, so Val flips out and stabs him to death. Don't worry, there's more!

Val decides to confess to her estranged mother about her crimes and quickly realizes her psychosis was inherited from, guess who? Brandishing a steak knife, Mom screams, "It wasn't that cow Linda who took your father from me! It was you!!" "From the day you were born he stopped loving me!" "I'll kill you to get him back!" Val, after a wild battle with her mom, using her best gymnastics skills, kicks her to death; out of guilt for killing her mother, comes back home and cuts her father's eyes out. Linda, believing she accomplished the murder, kills herself under the delusion the police are breaking down her door. Back at the cemetery, Val confesses all to Patty, her gym classmate, who strangles her to death on the spot. The story ends with a girl saying she's going over to Patty's house to see her, with the Peeping Tom monster mask sitting in her handbag.

This is probably the darkest thing Gilbert Hernandez has ever created, and that's saying quite a lot. I don't believe "Love And Rockets" fans in general like this sort of comic, but it's such a chilling and demented tale of familial unhappiness, almost like some kind of modern Greek tragedy with a suburban spin. Hernandez's use of light is highly expressive and adds greatly to the creepy vibe throughout. The lack of attention paid to this slasher epic is surprising. I loved the Herschell Gordon Lewis vibe "Speak Of The Devil" struck, and think that this particular tale of adolescent love gone psychotic will stay with you for a long time. 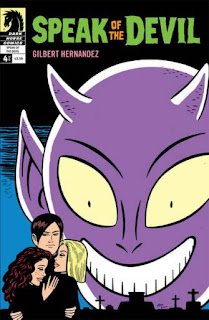 no? not a good look?

no? not a good look?