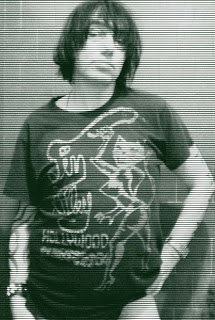 Guitar Center (7425 W. Sunset Blvd.) - The last time I went to Guitar Center I saw a Japanese kid posing all slumped on an amp, playing Jimi Hendrix riffs letter perfectly on a Fender Strat, xerox riffs of "The Wind Cries Mary" and he was loud. VERY LOUD. There were twenty other guys doing almost the same thing, so the main room was almost as loud as a speedway in full tilt.

The only reason Guitar Center works for me is because it's a quick place to get guitar accessories, and they have a good selection of guitar stands, straps, strings, etc. Got a sweet Pignose amp there, plus my all-time favorite, the belt clip-on Marshall stack you plug your guitar into so you can jam dirty, distorted guitar in the kitchen, at the parking lot, in the crapper, portable boogie is all yours!

Don't waste your time and money on guitars or amplifiers here, they're overpriced at a ridiculous mark-up. Your better buy would be from an e-tailer like Music 123 (look it up, ya lazy) because they have a wider selection and sell at lower prices. You can get a cool Johnny Ramone Mosrite guitar for only $300, way cheaper than Guitar Center would ever charge.

Oh, and if you walk by Eddie Van Halen's handprints on the Rock & Roll Walk of Fame, do the right thing and spit on it. That turd took Kurt Cobain to task for having a black guitar player in Nirvana. He really ought to apologize to Pat Smear.


The Cinema Bar (3967 Sepulveda Blvd.) - Eve knew her apples. Adam knew his women (well, he only had one) and I know Culver City. Duller than dull, but here's tons of action at The Cinema Bar.

As everybody else has said the bartenders rule and last Friday my friend's band played, as opposed to the biker jug band fare they usually put on. The space was scary because the club is as small as a cat bed, add the bandstand, the bar and a few tables even! so racing off to the cool patio in the back was a good option.

The crowd was a mixture of aging chunky biker barfly, Ultramega OK metal heshers and confused creeps like me. There was a black tweaker with Afro pigtails trying to sell me crank and I said no. If he was taking what he was selling nobody wanted in. The brother was splayed.

I just wish they had the gigantor TV on with footage of the X Games with Travis Pastrana making with the freestyle MX jumps. It would have enhanced the hesher factor. But no matter. Culver City is redeemed by this cool saloon.

Carvin Amplifiers (7414 W. Sunset Blvd.) - Nice change of pace from the screaming in-your-face vibes of Guitar Center across the street. The Carvin store looks quite cave-like from the outside, craggy rock entrance and all. You step in and it's pitch black with little spotlights over the amplifiers on sale. It's like buying your gear at The Batcave.

The amplifiers sound sweet, better than Marshalls IMO, but they're damn pricey, but what the hell did you expect? You're buying your gear from The Batcave.

The Cat Club (8911 W. Sunset Blvd.) - "So, how's your love life?"
That's the greatest pick-up line I've ever heard. Not very clever, I know, but the girl that asked was wearing nothing but a baby diaper and cowgirl boots. That's the kind of memory you take to the grave. What does any of this have to do with The Cat Club? Absolutely nothing, but there's nothing terribly relevant about The Cat Club, either.

Saturday night: At the club we ordered drinks at a jaw-dropping $10 apiece. I didn't know a bottle of Bud was worth ten dollars. My Scotch and Soda was so watered down you could have poured it into Lake Arrowhead and the fish would have felt cheated. The bartenders were hard of hearing and surly because they were up past their bedtime. God, they were so old they probably pissed sawdust.

The band Goo Goo Deville acted like Eighties glam metal was still rocking like gangbusters. The singer was so ugly he looked like he fell off Ugly Mountain and didn't miss a boulder. He flipped the dirty bird at the audience every 30 seconds. What a repertoire. Look out, Tony Bennett.

While they were chugging into their most excellent power ballad my girl tried to use the ladies room, a sliding metal door with one toilet inside, but there was a line. Just to speed things up she banged on the door to wake the dead (or at least the geriatric bar staff, hyuk!) and two metal strumpets marched out with sheepish looks on their faces. They'll have to engage in their Free Clinic Frolics somewhere else.

A lot of the kids loved the band and had a great time, I must confess, sloppy butt dames shoulder shakin' and tossin' their hair like a Pat Benatar video. I drained my $6 water, ahem I mean cocktail and headed for the exit. Halfway out the door someone yelled, "ANDY FUCKEN SEVEN", and I thought I've been here for an hour plus and now somebody feels like yelling my name. WTF?

But that's The Cat Club for you. Everything about it's a day late and a dollar short.

I don't know how these suckers cram for finals..."Dude, I got graded on a curve playing 'Crazy Train', I barely squeaked by"...do they realize the people that created these songs never took a class in music? It's weird seeing these kids from Sweden with their expensive, non-scuffed guitar cases studiously racing to class.

This is a very funny Blog.