What I Hate About You 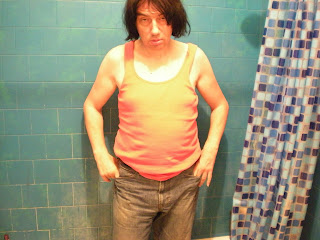 There will come a time when we will rise above our hatred and soar like eagles - sometimes it's just too hard because there's too many destructive fucks out there who live for ripping other people apart. That's when even the proud eagle must bare his claws and tear his enemies apart with his razor-sharp beak, and this is this week's topic:

Reality Shows: Stupid, overly cute trash featuring un-famous nobodies do what un-famous people do: be annoying. If I have to watch one more episode where someone considers a boob job (they're boobs already!) I'll explode. And yes, I have to watch this shit. My wife's addicted to this crap. She even appeared in one of them! (Gene Simmons Incest Parade, or something like that).

Pet Power: Why don't you just come right and admit you hate the human race with a passion that would make Adolf Hitler blush? I'm referring, of course to people that place their kids, pets or even plants over their fellow adult's rights.
Example, the assholes with those 10-foot long leashes so the dogs can tear up the sidewalk and trip you up while you're trying to get out of their way. How about moving your fucking mutt out of my way? It's called common courtesy, learn the motherfucking rules.
And trim your fucking trees and plants from my driveway. If you don't, I'll prune the fucking weeds to my satisfaction!
And Church Moms, if my wife scares your kids, here's a great idea: take them into the house after it gets dark. What kind of parent lets their kids run around after 10 PM anyway? Idiots.

Cell Phone Addicts: Don't you know somebody's having an extremely important phone conversation while you're reaching over for a can of veggies at the market? They can't have a convo in their car anymore, now they have full on discussions in public places, standing in your way and soaking up public space with their private issues. By the way, people are always crying about their privacy - if privacy is so important to these douchebirds why are they having personal phone calls AT THE TOP OF THEIR LUNGS at the laundromat, Trader Joe's or even The Little Boy's Room (aka toilet)? As soon as Mr. Important starts yappin' on the line in the crapper I make a point to flush the potty 100 times over and over again. You're bumming my BM out, brother!

Listen, I'm not one of these trendy misanthropes who says "I hate people" - I hate people only if they deserve it (heh!), so don't piss me off and in return I'll kill anybody who gets in your way. Yeah, that's the way I roll - the psychotic loyal friend. Join me in the winner's circle!
Posted by Andy 7 at 9:48 PM