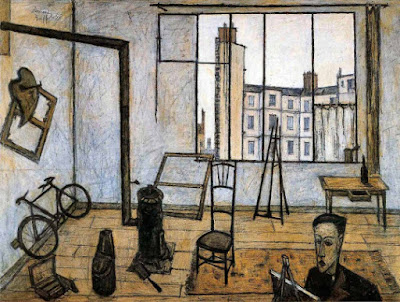 France has made a habit of taking us Americans to task for not appreciating our hometown artists, so it’s somewhat ironic that France has finally lifted its taboo on Bernard Buffet in nearly forty years with a huge retrospective of his work. Bernard Buffet has experienced some of the most extreme highs and lows of anyone in the art world.

Buffet painted in the Expressionist style, emphasizing harsh deep lines alternating with thin, scratchy ones and using thick applications of color. His content and style was simple enough to appeal to the man on the street as well as art critics. His art hit a nerve so immediately he made millions and won awards by the time he reached his mid-twenties.

Blessed with movie star good lucks, fame and fortune, he incurred the enmity of none other than Pablo Picasso. Picasso was incensed that his children allegedly found Buffet’s art more fun to look at than Daddy’s. Picasso led a rather loud campaign against Buffet out of sheer jealousy. 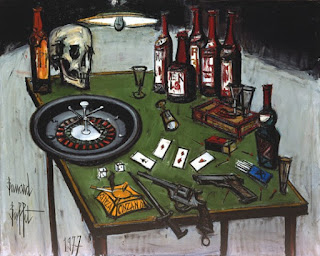 He also incurred the hatred of writer Andre Malraux, Pres. Charles de Gaulle’s Minister of Culture. Malraux branded Buffet’s genius paintings as “bourgeois” = I’ll translate it for you: “He’s too fucking rich, famous and good-looking so let’s just attack him because we’re a bunch of ass-wipe snobs”.

In retaliation Buffet did something that made him an even bigger fucking king in my opinion= HE STARTED DOING CLOWN PAINTINGS! Crazy, wild, deformed looking clowns! Lots of them! Enough to piss off every art snob from Paris to Marseille. And prints of these clown paintings sold by the millions. Every French household had a Buffet clown print in the house. Bernard officially joined The Ranks of The Terminally Uncool. He was sort of the Gallic Keane. 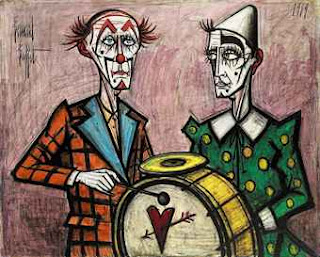 The straw that broke the camel’s back, unfortunately, was when he broke up with his boyfriend, Pierre Berge, over a spat about Yves St. Laurent. Berge ran into the arms of St. Laurent, and Buffet in turn fell in love and married beautiful singer and actress Annabel Schwob. The art community felt he’d gone traitor by marrying a woman. Is there no French word for bisexual?

In spite of it all the French government employed Buffet to design a postage stamp and Japan opened a Bernard Buffet Museum in Osaka. He continued to paint up until he contracted Parkinson’s Disease in his seventies and lost the ability to paint. With the loss of his only passion, Mr. Buffet committed suicide by self-inflicted asphyxia in 1999.

After all the awards and millions earned does it really matter if a jealous cognoscenti badmouths the work of an unimpeachable master? Buffet struck a chord with the average Frenchman, Picasso’s kids and me. And that’s what all great art should do. 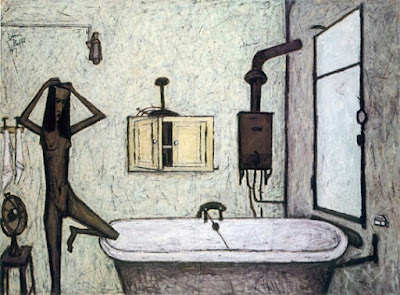 If you haven’t seen the works of Belgian animator Raoul Servais you’re in for a treat. Every animated work is a masterpiece of sight and sound and can be dug up anytime on You Tube. This one is one of my favorites by him: it’s an animated version of Belgian surrealist Paul Delvaux’s paintings. It’s called “Papillons De Nuit” (Night Butterflies) and is absolutely dazzling to watch.

I also recommend “Siren” and Chromophobia”, but all his works are breathtaking visually and well worth your time. You won’t be sorry!