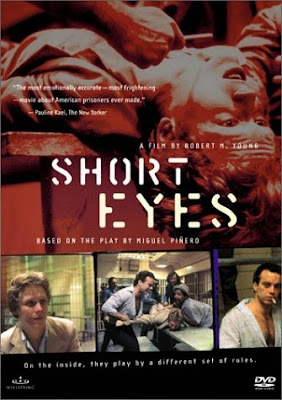 Some people like their Oz and some people like their Orange Is The New Black but I like my prison dramas with a Seventies exploitation flair, and thanks to You Tube and the people that uploaded them you can catch the two most notorious prison films of the Seventies: Short Eyes and Fortune and Men’s Eyes. Both films could play in a double feature at a movie theater and not appear redundant because both films are very different from each other. Let’s take a look at both films:

Short Eyes (1977): Written by Miguel Pinero, who also has a small role in the film, the movie begins with a Curtis Mayfield song, who also shows up as an inmate in the film, too. Crazy! Short Eyes takes place in the Manhattan Men’s House of Detention, more commonly known as The Tombs, where actual filming took place.

The characters are pretty well-sculpted: Don Blakely as the intense Black Muslim El Raheem, Shawn Elliott as the two-faced bully Paco, and Tito Goya as the young and pretty “Cupcakes”, highly desired by the inmates for some shower room booty. Poor Cupcakes, his girlfriend’s waiting for him on the other side!

After watching the inmates cutting up for awhile the focus turns on Juan, brilliantly played by Jose Perez. Unlike the rest of the inmates Juan questions the difference between right and wrong and struggles inwardly with his demons, striving to take the high road just to maintain a semblance of sanity. Nothing challenges his principles more than the arrival of a new inmate to The Tombs named Clark Davis.

Clark Davis is the focus of the focus of the story, flawlessly played by Bruce Davison (Willard, Last Summer). Clark Davis is an angry black/Puerto Rican’s dream come true: a privileged, blonde white man who faces a pedophilia conviction for molesting black & Puerto Rican girls. Davison, newly admitted to The Tombs, confesses his obsessions and crimes alone to Juan without a touch of guilt. 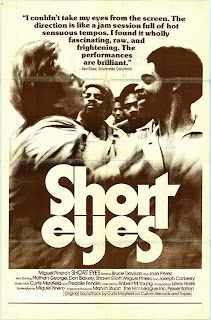 His account of molesting the little girls makes Juan bang the panic button because prior to Clark’s confession he thought he had a clear handle on ethics. Clark wants Juan to promise him he’ll cover for him in case the inmates go to town on him for his disgusting crime. Juan’s barely keeping his shit together trying to decide whether he should help him or just kill him on the spot.

What happens in the last twenty minutes is some of the most intense film making ever made, questioning the principles of every inmate on the block. The back story to Short Eyes on IMDb is pretty damned fascinating:

Miguel Pinero, the author of the play upon which this film is based (and the actor who plays Go-Go), wrote the play as part of an inmate writers' workshop while incarcerated at Sing Sing Prison for armed robbery. He missed the premiere of the film because he had been arrested for armed robbery. All of the money he received for the film ($40,000) he gave away to homeless friends and former prison-mates. He reportedly lived on the street even after the film's acclaimed release, using a pay phone as an office.

Tito Goya, who plays Cupcakes, was arrested for a murder committed in 1978 (eight months after the film was released). He was murdered in prison in 1985.

Bruce Davison's monologue was done in a single take. 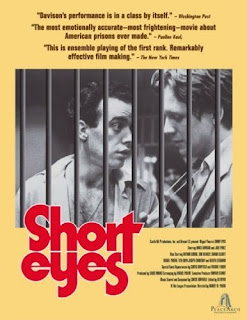 Short Eyes won the New York Critics Circle Award and an Obie Award for the Best Play of 1974.

Short Eyes was nominated for six Tonys in 1975, including Best Dramatic Play.

Fortune And Men’s Eyes (1971): Will forever go down in history as the play Sal Mineo worked on when he was murdered on Holloway Drive in West Hollywood. But that’s not fair – this is another great prison play turned into a motion picture.

Once again we see a baby-faced white guy named Smitty, played by Wendell Burton sentenced to prison (this one was shot in Montreal, Canada) and the cellmates he’s stuck bunking with. And what a bunch!

There’s Rocky (Zooey Hall), the brutally handsome kingpin bully who wants to rape every male in the big house, his slave - a boy called Mona, the awesome Queenie (Michael Greer) who flames queerer than any character in the history of the cinema. He kind of serves as the Mistress of Ceremonies through the whole story and even offers some much needed comic relief.

And boy is it needed. There is so much forced male rape, yes, one-on-one and gang, too, you won’t be disappointed. After witnessing endless shankings and rapes Smitty freaks out and his roomie Rocky offers him some much needed protection, never realizing that Rocky’s circling around his boy hole like a hawk swooping down on a chicken coop. 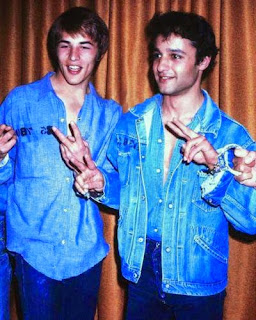 Here’s some back story about Fortune And Men’s Eyes:

Wendell Burton, aka Smitty, is now a minister in Texas.

The 1969 production in Los Angeles starred Don Johnson as Smitty and Sal Mineo as Rocky (!). I’d pay a fortune (pun) to see that production, especially since we’re talking about Boy And His Dog-era Johnson. According to Wikipedia, in 1966 a New York production featured Jon Voight as Smitty and Dustin Hoffman as Rocky, obviously sealing their relationship to come in “Midnight Cowboy”.

If you see a lack of blacks in Fortune And Men’s Eyes it’s because playwright John Herbert was Canadian and our story takes place in a Canadian pen. In fact, it’s the most published Canadian play ever written and has won countless Canadian drama awards.

So there you have it: Free movies in their entirety on You Tube! If you have a Sony Blu-Ray player you can play You Tube on your television set in the comfort of your den or bedroom instead of perched in front of a desktop monitor. Here’s a list of a few more movies you can scope on at You Tube:

The Ruling Class, Les Bonnes Femmes and Les Biches (Chabrol), every Barbara Steele horror film ever made, RoGoPaG (Godard & Pasolini), The Decline of Western Civilization (the homeless punker one), and many more. Happy viewing! 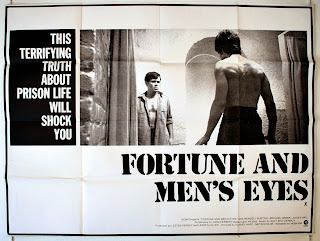