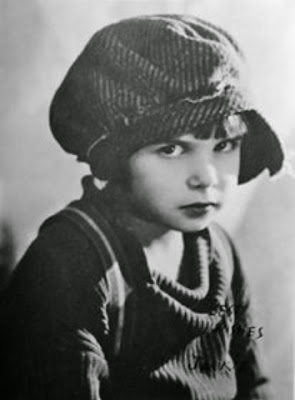 This year's Scorpio Birthday Tribute is a special one because it's not only in honor of one of my favorite silent film stars but it's also his Centennial Birthday, the one and only Jackie Coogan. F. Scott Fitzgerald once remarked that there are no second acts in life, but Coogan not only disproved that by having a second one, but an enormously popular third one.

I'll bypass a full-fledged biography on Jackie Coogan and simply talk about his work in films. Let's start with the first phase of his career as a child actor and one of the brightest lights in silent films. Many of his movies as a little kid were mostly comedies, beginning with a small part in Charlie Chaplin's short "A Day's Pleasure" (1917), one of his best. Two years later he starred in Chaplin's classic "The Kid", where Jackie plays a child raised by Charlot in a glass selling scam by smashing in windows so Charlie can sell his glass plates.

Jackie, only six years old, had a natural talent for comedy with an equal knack for drama, and his talent provided a hit for the then-troubled Chaplin, who had the smuggle prints of the film past several states from being confiscated.

A year later he starred in "Oliver Twist" opposite the legendary Lon Chaney, who played Fagin. It was said that Coogan was afraid of the wild eyed Chaney who had to things down a notch or two once the cameras stopped rolling to gain the friendship of little Jackie.

Unfortunately, prints of his classic comedy "Circus Days" (1922) are lost with a few surviving scenes available on the Warner Bros' DVD of Charles Chaplin's classic comedy "The Circus". Jackie plays Toby Tyler, a character later made famous by Walt Disney on television, however, Jackie plays the character with a better feel for slapstick than the Disney version.

At the peak of his popularity, Coogan was the highest paid child star of his time, making $2,000 a week as salary with his parents as the trustees.

What was saved, however, by Turner Classic Movies, is "The Rag Man" (1925), where Jackie plays the crafty runaway orphan Timothy Aloysius Michael Patrick Kelly, who befriends a tired old Jewish junk dealer played by the great Max Ginsberg. By now Jackie was ten and growing but still adorable and funny. His constant negotiating and wheeling and dealing with an old East Side Jew on the streets of New York is very funny. 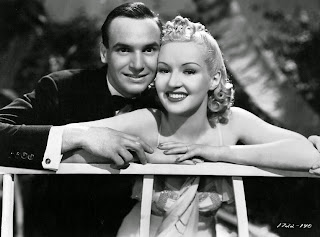 By the mid-thirties Coogan suffered two major tragedies: (1) His father and best friend died in an automobile accident with him as the only survivor; and, (2) His discovery that his mother and step-father spent every penny of his child-star earnings. Both tragedies sent him towards a downspin complicated by heavy drinking.

A three-year marriage to Betty Grable resulted in Coogan raising the ire of MGM mogul Leo B. Mayer, who offered Coogan a 7-picture deal, which Coogan turned down and earned a blacklist from the monstrous Mayer. Coogan didn't work in films for another eight years.

It's at this point that Coogan's career becomes even more interesting, because Phase Two of the Jackie Coogan Story has our hero acting in the Fifties doing mostly exploitation schlock classics like Mesa of Lost Women, where he played the mad scientist Dr. Aranya (joined by Dolores Fuller!). Now that Coogan had lost most of his pretty hair he had the freedom to play mostly bad guys and psychos, attacking every role with nutty abandon.

You've seen at least two or three of these crazy films: Sex Kittens Go To College - Jackie plays a rich tycoon using an unfunny W.C. Fields voice while Mamie plays the busty, brainy college professor, The Beat Generation - Jackie's a cop who has to put on the drag during a stakeout with his partner Steve Cochran (comedy gold), Night of the Quarter Moon - directed by the great Hugo Haas!, but the magnum opus of that period has to be High School Confidential, where he plays the sinister Mr. A, resplendent in dark badass shades and heroin pusher to the high school kids at his hipster jazz club. 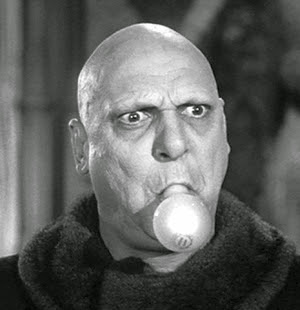 But alas, the sleaze stands alone and the well dried up for high school crime flicks so Jackie did a bunch of sporadic TV appearances for the next four years, until he reached Phase Three of his career and arguably the role he's still notorious for, the role of Uncle Fester on The Addams Family (1964).

Some of Coogan's best comedy work is on The Addams Family and a lot of fans even say he steals many of the scenes he's in because he's that good. Coogan's signature comedy shtick on the film was to stick a light bulb in his mouth and immediately have it light up. Kids would tune in every week to see what he's say and do next. He was the Soupy Sales of Goth!

The bizarre irony of the Uncle Fester character was that Coogan wore a thick sweater virtually identical to the one he wore forty years earlier in "The Rag Man", making virtually the same smiles he did back then but now older and more worn out. Also ironic about his popularity is that although he was once a child star he now had every child in America following him just like the Twenties.

But nothing spells closure to the Three Acts of Jackie Coogan's career than the day his old boss Charlie Chaplin returned to the United States after 20 years to accept a Lifetime Achievement Academy Award. Upon arrival at LAX he saw Jackie Coogan there to greet him and hugged his once young co-star. He turned to Coogan's wife and said, "Never forget that your husband is a genius". From million dollar kid to exploitation films to TV horror comedy, Jackie Coogan always delivered.