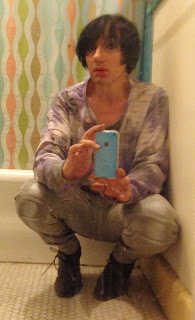 During the course of my regular forays to the textile stores in the Garment District I saw some wild material that looked outer space-like with its use of craters, drifting colors and tech stripes. It came in three colors: red, dark blue and purple, and they were applied in a slightly hippie tie dye style, but not so much that it was overpowering.

I bought the purple to make a cool top (pictured above), the dark blue for pajama bottoms, and shined on the red (too feminine). The vendor called it zombie fabric and I think Shrine sells tops made of this material, also calling it "Zombie tops". I think it looks more Outer Space than Zombie, but whatever. I thought it came out pretty well. 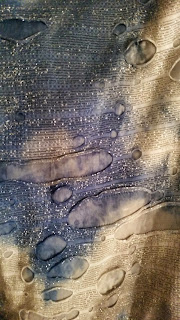 I've always had a problem with t-shirts because of two things that bug me about them: 1) That annoying high "Fanboy Collar" that rides so far up it practically covers your Adam's Apple. As someone who suffers from claustrophobia I find this tight collar unacceptable, and 2) Those hug bat-wing cap sleeves that jut out of your arms. Since girls for the most part wear baby tees this isn't a big problem for them, but as a guy I can't stand the baggy cap sleeves.

As far as the bat-wing sleeves as concerned I've taken to rolling up my sleeves and sewing them in. This gives each tee a cool retro Fifties vibe to them which I like. They also show your guns to their best advantage, and it's my opinion that a man's guns are the masculine equivalent to a woman's cleavage: a sexy reveal that isn't dirty and shows a man's hottest feature. 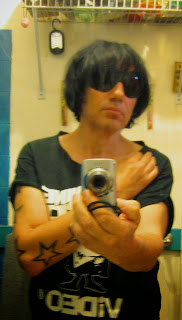 While American Apparel is mulling over former CEO Dov Charney back to the fold - a big step back, I think - his old promotional formula of featuring swarthy, underage girls is being foiled by, horror of horrors, using three blonde drag queens to promote their new line.

The three drag queens are RuPaul's Drag Race superstars Courtney Act, Willam and Alaska Thunderfuck. This might be the greatest F-U to the sexist, homophobic monster who ran the most offensive retail marketing campaign in fashion history.

What makes this campaign doubly amazing is that it not only supports transgender models, blasted recently by fashion curmudgeon Tim Gunn, but that it also smashes AA's previous use of underage models. T-shirts of all three models marketed by AA have gone through several printings after selling out worldwide. In-store appearances have resulting in mobbing not seen since the heyday of Victoria's Secret's "Angels" campaign.

While some people like Gunn find this perverse it's a fresh breath of air from all the Gerber Baby looking girls one is forced to look at on a daily basis. Besides, the times they are-a changin', what with TG models like Carmen Carrera and Andrej(a) Pejic treading the catwalk modeling women's wear. It's time for the men to show all those Gerber Babies how to walk the walk. 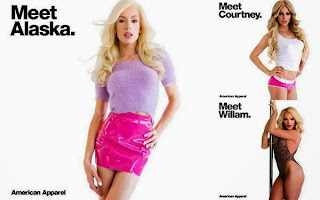