Once upon a time, well a few years ago I wrote a periodic blog called "Stuff I Burned From TCM" which was a regular round-up of movies I burned off the TV set from Turner Classic Movies because they weren't available on video. TCM probably caught wind of that happening too often so now they're in the business of selling overpriced dubs of these films.

Well, there are still a ton of things you can't buy from TCM but you can definitely see for absolutely free on You Tube, and not just scattered film clips but the movies in their entirety. You can even save them and burn them, too. Life is wonderful!

In addition to the movies listed below I've also burned dozens of Heckle & Jeckle cartoons (Fifties Terrytoons genius) and a funny Shemp Howard solo short called "Mr. Noisy", where the moonlighting Stooge spends all his leisure time heckling tennis players, golfers and baseball pitchers at the top of his lungs. Wicked! 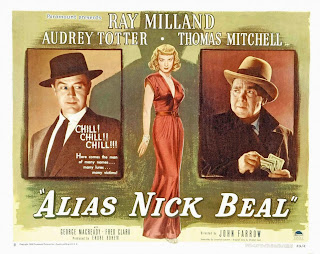 Alias Nick Beal (1949) Ray Milland breaks the bank playing a demonic apparition who helps a civic minded District Attorney (Thomas Mitchell) with framing a untouchable racketeer and consequently tempting him with a shot at the Governor's race, seal with a pact.

Many of the scenes with Mitchell and Milland either takes place on a foggy wharf or in some oceanfront dive (Don Burnham returns!). Of course, no noir is complete without a femme fatale so the great Audrey Totter provides a moral base, veering from dockside slut transformed by Beal into a politico temptress, a la Monica Lewinsky.

Totter delivers a great, convincing performance in her two phases but it's clearly evident that this is Milland's show all the way. He plays The Devil with great relish and seems to enjoy himself quite a bit playing a nasty, evil spirit. 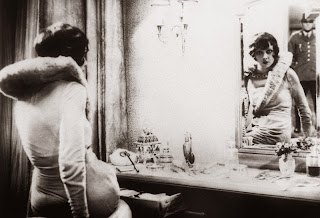 Asphalt (1929) is a German silent film classic directed by Joe May, and if you liked the Louise Brooks classics "Pandora's Box" and "Diary Of A Lost Girl" you'll very likely enjoy this one, too. The film begins with breathtaking scenes of Berlin night life in the Twenties with the serpentine underworld slithering through the crime-ridden streets.

Joining in the larceny is Else Kramer, played by the great Betty Amann (shown above), conning an old jeweler with seductive behavior. While she's teasing the old fogey out of his diamonds we see a big, dumb lug of street cop Albert Holk (Gustav Frolich of "Metropolis") doing his boring job of guiding cars across the street.

After Else is accused of swiping diamonds in the store they grab a cop down the street, and the next thing you know Officer Holk takes Else in for booking. Unfortunately, Else turns on the water works in the cab and persuades Officer Holk to take her to her flat first so she can grab a few of her things.

She turns on the charm and the cognac and Office Holk finds himself in bed with the criminal. Was their love making real or was it just another con job pulled by Else? It's hard to tell especially since her current boyfriend, a big-shot criminal busts in on them later and things come to a deadly head.

Asphalt is another great film about an honest man fallen from grace by a demonic woman. The Germans seem to be fond of this plot since The Blue Angel mind the same territory with dramatically different results.

Amann may not be as endearing as Brooks or as humorous as Dietrich but had she moved to the States she probably would have had a great career as a film noir femme fatale. If you like great silent films then Asphalt should be at the top of your list (right after Piccadilly). 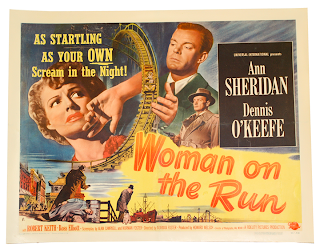 Woman On The Run (1950) An excellent noir completely owned by Ann Sheridan as you've never seen her before. After playing the reliably good girl in so many Warner Bros. films in the Forties she becomes a nasty bitch in this film, looking and behaving a great deal like Rita Hayworth did in "Lady From Shanghai".

The great irony of the story is that the real person "on the run" is Sheridan's husband who suffers from major paranoia after witnessing a drive-by shooting. Since Ann is the only one who can lead the police to a husband she hates she builds up a hard as nails attitude. You wonder who she has more contempt for: her husband or the authorities.

Filmed almost entirely on the streets of San Francisco, portions of the film almost verge on being some lo-fi travelogue, Ann hitting the pavement of Market Street, Fisherman's Wharf and old North Beach. The street scenes put the location shots of "D.O.A." to shame!

What makes the film so brilliant, however, is the way both the police detective, played by Robert Keith, and the pesky news reporter, played by Dennis O'Keefe, force her to give them more and more information about her much hated husband. The woman on the run flees the streets of Frisco Town like a demented harpy confessing her feelings about a man she once loved.

The great climax to this film takes place on a roller coaster in an amusement park (shades of "The Burglar"!). Robert Keith you'll recognize as the small town sheriff in "The Wild One" and Dennis O'Keefe is great as usual just as he was in the Anthony Mann noirs "Raw Deal" and "T-Men". Highly recommended! 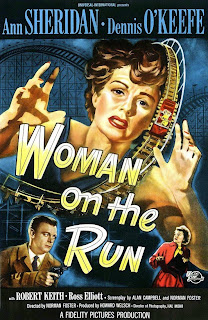