The Pickpocket In The Slam Pit 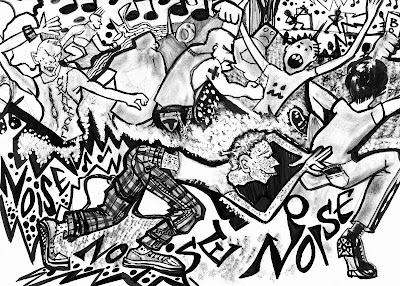 11:45 PM. Skipjack's. Long Beach, California. Skipjack's was a hardcore punk club in the South Bay area. The club was an old wrestling-cum-roller derby auditorium framed in stucco and neon lights with a lot of rotting wood inside. The auditorium itself seemed to be slowly decaying from the salty sea air that wafted northward from the harbor a few miles away.

Punks from all over the hoods of Wilmington, Lomita, and Pedro all converged every Friday and Saturday nights at Skipjack's. Stew Rat Nickson was no exception, a miserable specimen of lowlife punk rock, a skeletal, gangly youth with clammy white skin housing a relentless network of freckles and pimples. He had so many freckles and pimples nobody knew where one began and the other one ended.

His head of short hair was dyed a sickly orange with bald patches that had other colors dyed in there, and dyed so badly that some of the dye stained his neck and ears. Mr. Stew Rat simply didn't care.

Tonight was the night of Stew Rat's big score. It was simple: his tartan bondage pants had a long zipper running down the length of his right leg with a cargo pocket running from upper thigh to his ankle for hiding things...like wallets.

The plan was to get into the slam pit and find himself the better, aka well-fed, suburban punks and pull their wallets and cram it down his secret pocket. The club was so booked with moshers he would easily score, and no one would be the wiser. The quickest smash and grab ever.

Crank Call were on stage and tearing it up, playing a mile a minute and roaring as ferociously as a jet plane taking off. The lead singer, a beefy sunburned monster in a crewcut stepped up to the mike and bellowed, "HOW MANY OF YOU DICKS CAME HERE TONIGHT TO FUCK SHIT UP? YEAH!"

The audience roared and Stew Rat pushed and jostled his way through the crowd, knocking over a few beers in the process.

Stew Rat shoved his way further towards the pit, bodies parting further and further away from the chaotic dance of destruction, a sausage fest of tribal brutality. Young men careening and bashing into each other like wayward steel balls hitting bumpers and flippers in some god-forsaken pinball machine.

Stew Rat grinned with his decaying orange teeth glowing in the darkness. An occasional mosher would bump into him, some smiling and saying, "SORRY, DUDE!".
Stew Rat didn't care, they were fair game to him.

He pulled the zipper halfway down the long cargo pocket, readying himself for the big steal. He was about to hit his first victim when the song ended abruptly as all hardcore songs go.

Stew Rat licked his lips and chortled.
"Come to Poppa, fucker!" He angled his way in to a clutch of young punkers all collapsing in a heap. He half-humped the cleanest looking one from behind and quickly slipped his fingers into his back pocket and slipped the fancy crocodile skin wallet down the cargo pocket.
"Score!"

He moved over to another clutch of guys ready to collapse in a heap and dog piled underneath, pulling one wallet, then another out of the range of anyone's vision. Both wallets went straight down the cargo pocket.

As soon as he got up on his feet he saw a big fat dude crowd surfing, the kids around him holding up the surfer with their arms suspended above their heads.
"This is too easy!" Stew Rat chuckled. "Easy pickings to be sure!"

He spotted a wholesome looking punk and leaned in on him, slipping his fingers effortlessly into his rear pocket. He didn't have a wallet in there because he pulled out a lump of snot rags.
"YUCK! He probably keeps his wallet in the front. That sucks".

Stew Rat saw another clean-looking punker hoisting the fat surfer with both arms up and rubbed up against him. Sliding with the agility of a ferret, he slipped his fingers into the back pocket and quickly pulled out a wallet with punk rock stickers all over it and tossed it down the now bulging cargo pocket. He finished his steal just in time as Crank Call finished their song.

"Ho, ho, ho, this rules! This might be my best night ever! Long Beach is the greatest!" He laughed to himself. He looked around feeling mighty smug about himself until he caught a huge, dark Latino dude in a wife beater staring at him across the pit with sheer hatred.

"Shit, is this asshole onto me? He looks like he saw something. Maybe everything", Stew Rat got nervous.
The Latino dude was about to cross the pit and attack Stew Rat.
"What does this fuck face want? Does he want a split, is he gonna narc on me or is he gonna pound me for all my shit?"

Stew Rat began walking away backwards, but it wasn't necessary. Crank Call's singer stomped up to the microphone and barked.
"YOU JAGOFFS ARE WEAK!!!! I WANNA SEE SOME SERIOUS MOSHING, DICK FACES! THIS SHIT'S CALLED 'BREAK, BROKEN, BROKE'! 1-2-3-4!"
The band busted out a stormy wail of radioactive waste, guitars feeding back and spitting out electric noise and the singer howling like a witch doctor fished out of the Pacific Ocean.

The guys in the slam pit were now doing the circular chicken dance like demented Navajo warriors, stomping their feet and pumping their arms like a circular locomotive around the dance floor.

The Latino quickened his pace towards Stew Rat, dodging the slam pit circle and getting closer and closer to catching up with him. Stew Rat began to panic, wet himself, whimpered and broke out in a nasty sweat. A musky odor filled the air.

Just when his pursuer was about to catch up with him a stage diver leaped off the stage and landed feet first on the big, dark man's head, kicking him unconscious. The slam pit opened up and bouncers pushed their way in to take away the unconscious Latino. They grabbed him by his legs and pulled him across the club like a limp wheelbarrow.

"OFFICER DOWN, OFFICER DOWN. NO SERIOUSLY, LET'S DO ANOTHER SONG, THIS ONE'S CALLED 'PISSPOT PRINCESS'". The band ripped into their newest number with a vengeance.
Stew Rat calmed down in the knowledge that his pursuer was knocked out cold and put out of the way.

He spied his next victim, a beefy well-fed punk rock jock. Everyone in the pit pressed up against his body so his pressing up against him wouldn't look conspicuous at all. This was too perfect. He shoved and slammed his way towards the jock, ricocheting with the rest of the guys in the pit.

"CLOSER, CLOSER, ALMOST...THERE!" Stew Rat practically humped the jock with his torso, quickly slipping his fingers into the back pocket and pulling out the wallet. Just as he was about to toss it down the secret pocket, he heard someone yell, "LOOK OUT!"

The bondage strap that ran across his trousers was caught in the jock's left leg and he was stuck to him and couldn't extricate himself, meaning he was stuck when he saw Crank Call's guitarist jump off the stage and land on top of him with the guitar's head stock impaling him deep into his skull, the stainless steel machine heads knifing into his cranium, thus ending the short lived crimes of Stew Rat Nickson.