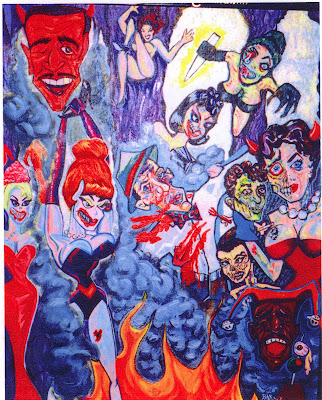 This will probably go down in Los Angeles history as one of the worst summers ever. Here we are in early August, and while the rest of the country is sweltering and sweating here in LA every morning has been cloudy, gloomy and downright cold. If it ever gets warm at all it doesn’t last long, and there’s always a glacial wind to cut down on the warmth. In other words, it’s Springtime In July and Springtime In August. Who knows what’s going to happen in September?

Because of this shit weather the general disposition of LA natives is pissy and angry – an equally shit economy and a rapidly decaying grasp of patience/attention span doesn’t help, either. People are angrier than ever.

Negativity seems to work for a lot of people. There’s no concept of perhaps making the most of a bad situation, and Heaven help you if you try to say something positive or you’ll get shot down, so I won’t. I’ll just post this great video from Supergrass.

Supergrass are not only one of the best bands to come out of England in the past 20 years, I think they’re heirs to the throne once inhabited by The Kinks, The Who and The Small Faces. Their output of perfectly crafted British pop songs is considerable, the first three albums in particular, I Should Coco, In It For The Money, and Supergrass, are flawless, brilliant rock albums and have more balls and spirit than the rest of their overrated contemporaries. Plus they look totally cool!

If Supergrass doesn’t cheer you up then check out this amazing video from Mississippi Fred McDowell. Not only is this song amazing, but the video of “Shake ‘Em On Down” is ultra-cool, giving us an uninterrupted look at his flashy fingerwork across the fretboard. If this isn’t one of the best guitar lessons you’ve ever seen, then you’re not a serious player. Really.

I wonder what guys like Son House would say to these spoiled brats crying about not making their first million or realizing their projected plans for world domination? Idiots like Kanye West could learn a lot from House’s “Death Letter Blues”. Maybe not. Kanye West is retarded, and his fans are even more retarded than him. Look at me, I’m starting to sound pretty angry myself. Maybe I ought to listen to some Les Paul and Mary Ford.

Now that’s better. Les Paul and Mary Ford played music for the sheer love of it, just like Memphis Minnie and Howlin’ Wolf. Maybe if I post their insanely sunny take on that hoary old Gay ‘90s standard “In The Good Old Summertime” that motherfucking sun will finally show its face. Or maybe El Sol is busy nursing his big hole, like the ones in everybody’s empty skull these days.

Painting: Ol' Black and Blue Eyes Is Back by Rebecca Seven