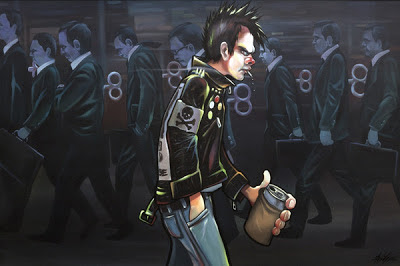 The new neighbor moved into my building right after 9/11, and his forthright friendliness and good nature was startling, startling because the general behavior of people in my neighborhood was snobby and rude.  He told me his name was Alex and I thought he was the most down to Earth guy I’d met in ages.  Alex said he was an artist and I thought, “Okay, just another artist in L.A.” Wrong.

I learned a lot more about him one night when a couple of kids engaged in some low-rent tagging in the alley behind our building. Alex’s apartment faced the alley so it didn’t take him long to race out and stop the graffiti in progress.  “Hey you guys you can’t tag here!”  The taggers ran a cross between teenage fear and rebellion, keeping their backs up. I stood by my car in the parking lot watching the whole thing.

As Alex got closer to the three kids you could see their bravado deflate and their expressions melt into complete awe at the sight of him.
“Hey, you’re Axis, fuckin’ A!” one kid said.
"No way, dude!” the other kid yelled.
“Dang, that’s Axis from the CBS Crew!” another kid gushed.
Alex aka Axis talked them into taking their act somewhere else and they took off but not until after they bumped fists and told him what big fans they were. My neighbor wasn’t just Alex but a graffiti legend: Axis from the CBS Crew. 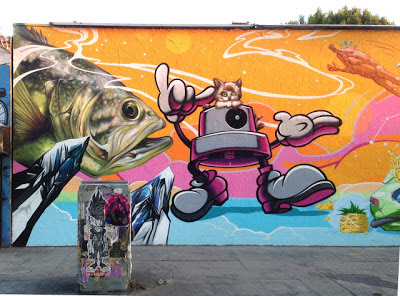 Alex played it cool, drinking with me at The Coach & Horses bar on the Sunset Strip in Hollywood, working the room and scamming on chicks. It seemed as if he knew everyone in there.
“I’ve got an installation next Friday at a store on Melrose, can you guys make it?” he asked.
“Sure”, I croaked.
“It’s gonna be cool, a few of my paintings’ll be up and I have a few custom made t-shirts and stuff, there’s gonna be a DJ and a bartender there. It’ll be great if you guys could make it”.
When the night we over we got a lift home from a cab driver named Hamlet. I never met a cab driver named Hamlet before; it was crazy.

The art show opening was a different story entirely. Seemed like everyone from The Coach & Horses was at the show and even more. It was the most packed show on Melrose and brought back memories of the old Luz De Jesus when it proudly stood on Melrose & Poinsettia way back when. Alex/Axis’ paintings and t-shirts hung on clothes hangers suspended from butcher‘s meat rails running around the store to the shop window in front.

Bridget The Midget’s band was awful, just stale Grade Z punk rock and little Bridget was even worse. She couldn’t sing to save her tiny life and even made a point of overdressing in Army fatigues to hide the fact she earned her dough jigging around naked sucking dick for cash. Wendy O. Williams she wasn’t. She even insulted Axis on stage, a genuine throwdown considering the fact he had a killer band at the time called DWP: Drunk With Power. 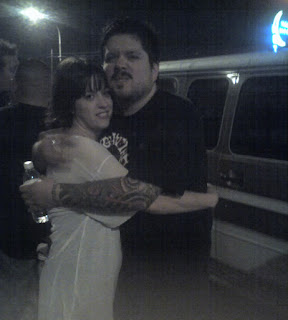 Bored with her lopsided hardcore antics on stage, I wandered around the club and noticed a little room in the back all painted red. I got closer to the door and realized there were a lot of bears in leather doing all sorts of weird stuff, when suddenly an arm yanked me away from the door as quickly as possible.

Well, neither was watching Bridget The Midget so we took off mid-set and headed straight back to The Coach & Horses. But just to show how it’s done, not too long later Axis played with his band The Sickness at The Cinema Bar in Culver City. The Cinema Bar is the greatest club on the planet where hippies and bikers and punks and slacker kids all converge and the drinks are awesome and they play old cowboy records on the jukebox. The place was jam-packed with fuckers of every stripe and Axis had the last word performing after The Porn Midget’s diss.

The Sickness played a sort-of Black Flag punk sludge gone speed metal flug that ripped your ears out and pissed on your brain. Axis ripped out some vicious chord-age while his singer, a Mechanic Destructive Kommando  yowled at the top of his lungs, “BULL-YER-AWL-PIG JE M’APPELLE GRUNT HUFF LA KUNT KILL BZRGLYRGFLG!!!!!” The music sounded like a caveman carrying a heavy boulder up a slippery mountain of mud. The rhythm section pounded evil migraine skullfuck while the amp stranglers shrieked in your face all night. The audience dug their shit, immensely. 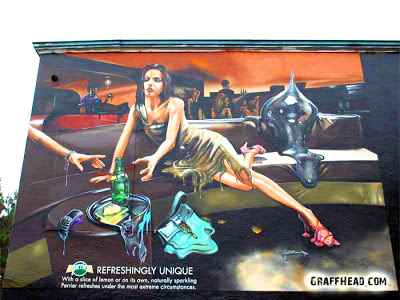 But one of the most memorable nights was when our girlfriends were out of town for Christmas in 2002 and we hit Max’s on Fairfax Avenue. We tossed back our drinks and talked about the psychopaths in the neighborhood ("Who's gonna get locked up next?") when suddenly the room was filled with Clash records played at ear-splitting volume, and it wasn’t their shit disco crap, it was all the good punk rock records, too: Complete Control, City of The Dead, Janie Jones, 1977, What’s My Name, I Fought The Law.
“This is great!” I told the bartender. “Why all The Clash records?”
“Didn’t you hear the news -  Joe Strummer died yesterday”.

So that was Christmas in 2002, Clash records played loud enough to shake the walls with Axis talking the bartender into letting him mix some Chocolate Cake drink behind the bar. It only goes to show that art isn’t just about painting but playing the loudest racket or mixing the wickedest drink or just making people crazy with the art of living. Axis gets it all done.

To see more of Axis' art, go to stylepig.com