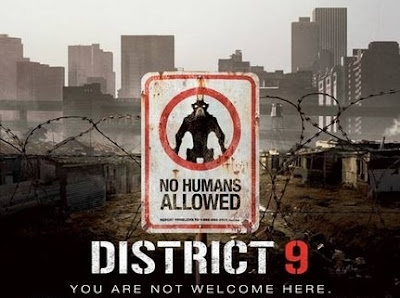 District 9 achieves the impossible: it’s a film that manages to merge science fiction, political satire, comedy and action hero testosteronics without dropping any balls. It all works flawlessly and perhaps that’s why it earned an Academy Award Best Picture Nomination in 2010 (The Hurt Locker won).

Neil Blomkamp’s first film is a stunner: a gigantic space ship from an unexplained planet is land-locked over Johannesburg, South Africa with all the aliens aboard (called “Prawns”) near death and dehydrated. After being “rescued” they are sent an internment camp which quickly turns into a beat slum where they are largely neglected.

The discrimination takes a turn for the ugly when a munitions company called MNU (Multi-National United) begins a program to have them all kicked out of their shacks in the largely fenced off area. Most of this is shot in a reality show documentary style, almost overshadowing the excellent CGI effects of the Prawns arguing with the authorities.

A cheerful, bumbling stooge of a bureaucrat, Wikus van der Merwe (Sharlto Copley) is assigned to head the eviction project. Although he believes he’s been assigned this task for his dedication to MNU it’s revealed that he’s the boss’ son-in-law. Copley plays van der Merwe with an Inspector Clouseau-style obliviousness.

The discrimination and persecution of the Prawns in South Africa brings up several parallels to apartheid, however in this film even the blacks bully the Prawns terribly, especially local gangster Obesandjo and his thugs.

During a routine eviction of Prawn scientist Christopher Johnson (Jason Cope) Wikus finds a canister of Prawn biochemicals that explode in his face, causing him to develop black nose bleeds, frequent lapses in consciousness, and culminating in his development of a Prawn claw. Wikus, after experiencing a nightmarish medical examination, escapes from MNU pursuit to hide in District 9. These scenes recall not one, but two classic Franz Kafka short stories: The Metamorphosis and In The Penal Colony. 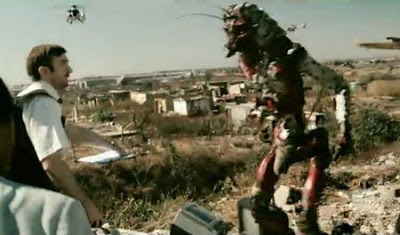 At this point of the film the tempo changes from fake documentary and comedy to suspense and action film. Wikus wakes up to the fact he’s been played for a stooge, dumped from his job and his wife and a prime candidate for dissection by both the MNU and the insane Obesandjo (Eugene Khumbanyiwa).

Wikus begs scientist prawn Johnson to hide him much to Johnson’s chagrin, only relenting when he sees his son taking a liking Wikus’ newly grown claw (“He’s one of us”.) Wikus plans a suicide run back to the lab that kept him to recover the cylinder Johnson spent twenty years collecting to enable his spaceship to fly back to his planet. It’s never fully explained how the spaceship rocket fuel can transform an Earthling into a Prawn.

Without getting further into the story there are a lot of action film battle sequences between the newly prawned Wikus against the MNU (esp. a sadistic soldier named Koobus, played with moustache twirling villainy by David James) and the Obesandjo Gang.

While I’m not much of a CGI fan I have to confess that the CGI aliens are outstanding and the audio for their weird voices are bizarre, sounding like a cross between a clicking taxi cab radio and a dying tuba. As stated earlier, there are quite a few references to South African apartheid but on a planetary scale. Copley’s performance as Wikus is excellent, shifting gears from bumbling idiot to persecuted Earth citizen with equal intensity. Come to think of it, District 9 isn’t all that different from The Hurt Locker; it’s The Hurt Locker as co-written by Franz Kafka and Harlan Ellison. 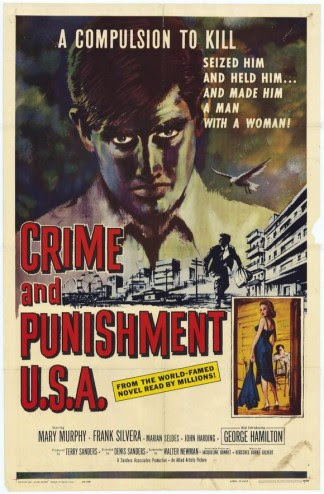 There have been many versions of Crime and Punishment in the cinema, the Peter Lorre version being somewhat good to the awful Crispin Glover–starred update, but there will never be one as nutty as the Southern California hipster version made in 1959, retitled “Crime and Punishment USA”.

Directed by the great Denis Sanders, Crime and Punishment USA is George Hamilton’s maiden voyage as leading man, and he plays the accused killer simply named Robert with an Anthony Perkins-type reptilian aplomb*. The story takes place in groovy Venice, California with a lot of awesome location shots at Pacific Ocean Park (P.O.P. also seen in “Movin’ With Nancy”), and while much is made of beatnik culture with Hamilton kicking back playing bongos with bullfight posters draping his pad, you can tell the Sixties are rolling right in to burst through the walls at any minute.

A few familiar faces are here, too: Frank Silvera from Stanley Kubrick’s “Killer’s Kiss” plays the dogged police inspector Lt. Porter, constantly trying to get Hamilton to confess to his crimes and presenting endless hypotheses about the act of murder. Hamilton laughs in his face and says he’s too good looking to be guilty of any crime, so typical of Southern California narcissism which is so rampant today. When Silvera asks him what he’s majoring in college, Hamilton says, “Politics –I hope to run for office someday”. Haw!

Mary Murphy from “The Wild One” plays a sexless prostitute who befriends Hamilton and allows him to read her diary so he can scream at her with schizo delusional superiority. The overabundance of dialogue would be punishing if it wasn’t for the sheer absurdity of what the actors are being given to read. It’s like a deadpan comedy version of Dostoevsky filtered through a dying beatnik’s cold, dying fingers. Regardless of who’s doing what to whom this is George Hamilton’s show all the way. And it freaks me out!

*It's interesting to note that three years later Orson Welles directed Anthony Perkins in a modern version of Kafka's classic "The Trial". Could Orson have gotten his inspiration after seeing this movie? Nobody's talking. :) 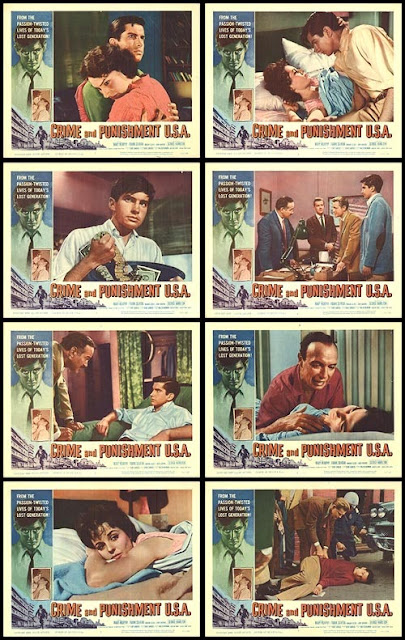 I love District 9. Now I want to watch it again.