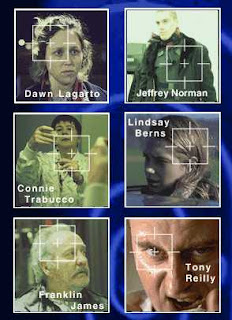 The opening scene to Series 7: The Contenders shows a pregnant woman with poorly dyed hair marching into a convenience store with a pistol in her hand shooting an old man to death. After blowing him away, she turns to the cashier and asks, “Hey, do you have any bean dip?”

Looking like a cross between The Hunger Games and Trailer Park Boys, Series 7: The Contenders is a comedic faux-reality show about six contestants killing each other for mysterious prizes. The longest reigning contender is Dawn (Brooke Smith), a pregnant woman expecting to pop any second going after random strangers picked Powerball lottery style. The six contenders include a professional nurse, a 72 year old shut-in, a teenage girl who’s a gun nut, an unemployed family man and Dawn’s high school boyfriend Jeff (Glenn Fitzgerald) from their goth club days.

What Dawn doesn’t realize, of course, is that killing Jeff is a futile effort because he’s seriously ill from testicular cancer, biding his time until the virus claims his soul. But somehow that doesn’t seem to be terribly important because Dawn has to uphold her champion killer status.

Series 7: The Contenders carries the slogan “REAL PEOPLE in REAL DANGER in a FIGHT FOR THEIR LIVES” filmed in that garish “Cops” style we’ve come to know and love so much. Guns are handed to all six contenders by production crew members in ski masks. If the contenders refuse them, as in the case of family man Tony Reilly, they’re hunted down in an OJ Simpson-style high speed chase down the freeway and beaten mercilessly.

Series 7 takes place in Newburg, Connecticut, Dawn’s home town. We see her being driven into town in a cab looking at the Motel 6 with its cheery light box cheering her on, “GOOD LUCK DAWN!” While she’s in the cab she asks the driver to take her to all five contenders’ homes, where she crank calls them, “I’m watching you right now. You’re dead meat”.

Returning to her mother’s house where she’s refused entry until she pulls out her piece, her mother reprimands her by saying, “How dare you show your face around here? You wouldn’t even shave your armpits for your sister’s wedding!” 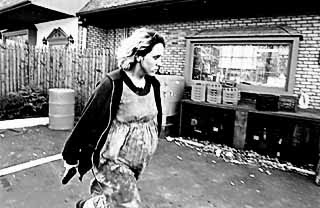 Lindsay Berns, the 18 year-old gun nut won’t give Katniss any sleepless nights, in fact she’s pretty air-headed (“My boyfriend picked out this bullet proof vest for me. I’m still a virgin, by the way.”) After almost experiencing death in a golf course shoot-out with Franklin the grizzled old shut-in she rebels against her parents by finally putting out for her boyfriend.

And by the way, all the usual gross reality show clichés are in full force: “I’m doing this for my kids!” “TURN THE CAMERA OFF, DAMMIT! TURN IT OFF RIGHT NOW!”

When Dawn finally meets up with her ex-boyfriend Jeff she tells him that she won’t kill him, but ironically Jeff asks her to kill him by lethal injection to put him out of his misery. Before their reunion we’re treated to a bad student film of the couple in their goth finest acting out to Joy Division’s smarmy “Love Will Tear Us Apart”. I thought they looked a lot cooler in goth drag, but there you go.

In the meantime, an anonymous note is sent to all of the contenders suggesting that they can be freed from the TV show if they all meet at the Wicks ‘N Sticks booth at the local shopping mall. Franklin the shut-in sees Lindsay and clubs her to death with his metal cane as her parents and boyfriend passively look on. After he’s done beating her he’s shot sniper style by Connie, who set the trap in the first place. Pissed that she's been scooped on several kills, Dawn chases Connie to her condo. Unfortunately, once she traps Connie and closes in for the kill her water breaks, placing her in a compromising position. Connie the nurse ends up assisting Dawn in the birthing process, saying, “I’m going to save the baby and then I’m going to kill you”.

Once the baby’s born, however, it’s taken away from Dawn by the show’s producers and told she can’t get her baby back until she kills Connie and Jeff. Connie goes to the hospital where Dawn’s staying at and goes to Jeff’s room to kill him with another lethal injection, not realizing Jeff has a gun by his bed. Once Jeff has finally killed his first contender he loses his death wish and decides to have a final showdown with Dawn.

But hold the phone, instead of killing each other, Jeff and Dawn beat the crap out of the camera crew – yay! – and run away, becoming fugitives reunited by love. The final climax falls to shit, though, completely ruined by a shitty re-enactment sequence where Dawn’s killed in a movie theater (???) by Jeff’s ex-wife. Why the final scene was played by different cast members doesn’t make a bit of sense and totally ruins the climax. Oh well, most of it was pretty good anyway.

Series 7: The Contenders is the perfect antidote to all those shitty contest shows we’ve all been subjected to. Once you see it you’ll never hear “Love Will Tear Us Apart” the same way again.

Hollywood biographer David Stenn’s documentary “Girl 27” is probably the most disturbing film I’ve seen in awhile. It’s the report of a true incident in 1937 of movie extra Patricia Douglas raped at an MGM Pictures sales convention. Because MGM at the time was to Hollywood what General Motors was to Detroit, there were a lot of people who didn’t want to step up and admit any wrong-doing by MGM.

What makes “Girl 27” so disturbing isn’t the rape itself but the behavior by everyone following the incident, which is shockingly abusive and negligent. Everyone around her did everything in their power to wash their hands of Douglas, from the defending attorney – who ducked out of not one, not two, but three hearings for his client, to her mother, who was paid off in money, property and even horses to shut up. Douglas died during the making of the film, and even her estranged daughter callously recalls telling the crematorium that she didn’t want her mother’s ashes in an urn and didn’t even want to pay $25 for a cardboard box to put them in. Even after death the ugly disrespect continued.

When Douglas does speak to the camera about her rape, a word she wouldn’t even use, and its aftermath, she explains her manic depression, made all too justifiable in light of the fact that absolutely no one cared to stand up for her at any time in her life, or even death, save Mister Stenn. “Girl 27” is the ultimate horror film, where corruption prevails and the victim is abused by selfishness and greed even within their own bloodline.

I want to see both movies. They sound very disturbing.