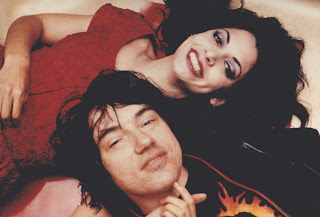 This week marks our 20th Wedding Anniversary, a marriage built on love, support and unlimited creativity. In the twenty years we have spent together we have supported each other and inspired each other to do our best work. My marriage to Rebecca has seen so much in the past 20 years: a band together (Cockfight), collaborative work together in clothes design, TV show appearances and videos, the worst earthquake in Los Angeles’ history, paintings I couldn’t finish so she completed them for me and it goes on and on. The creativity never ends. More importantly she’s the nicest girl I’ve ever met.

People ask us what do we do to stay together and the answer’s so simple it’s ridiculous. I wanted to marry someone who understood me and I didn’t have to explain myself every five minutes to her. She didn’t have to do that to me, either, because we both got it. I didn’t want to be involved with someone different than me. I guess it was the old punk rock tribe mentality; you keep to your own people and never stray too far from the camp. Once you do you’re fucked.

It was ironic that by the time I met Rebecca I was through running after girls in bands, whom I found to be all selfish, stupid and worthless, so it was funny I didn't realize she was the same Rebecca from Frightwig. She was so different from the idiot Hollywood girls that I’d wasted my time trying to be friends with. She was smart, she was funny, and she drew better cartoons and comics than anybody I’d ever met.

I liked Rebecca right away because she was the classic punk rock tomboy girl I’ve always liked, the kind Jaime Hernandez always championed in his Love & Rockets comic, which not surprisingly, Rebecca turned me on to. I’ve always had a theory that frilly girls were New Wave and tomboys were punk rock. She was also the only girl I met that seemed impressed with my punk rock record, video and comic book collections. She knew more about superheroes than I did! In 1992 it was still considered uncool for pretty girls to like comics, so she was definitely special. Actually, I first saw her at Golden Apple Comics in March of 1992. One year later we were married. 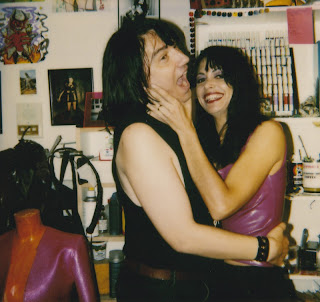 Our wedding was at the LA County Superior Court building where the Registrar-Recorder’s office was located. Weddings were held in the building at the time, not anymore, but since it was the Friday before Valentine’s Day the crowd of people waiting to get hitched was huge. A judge called us in his office with two witnesses, and just like a Justice of the Peace in the movies pronounced us husband and wife. I got her an awesome ring with colored stones, an Amethyst, a Blue Topaz, and a Citrine with a gorgeous setting. We were married on Lincoln’s Birthday, and it guess it was symbolic cause we freed each other by getting married, haw haw.

The following night we had a big party in Culver City and all our punk rock pals were there. It even made the gossip column in the LA Weekly, so that week we were punk rock news. Our marriage split Hollywood hipsters straight down the middle: some said we’d never last and some admired the fact that our marriage was so solid and that they could rely on us being a couple forever. One of the most memorable moments I can recall was when we sat in the darkness of Bar Deluxe in 1999 and seated across from us were Lux Interior and Poison Ivy, holding hands like an old couple and being happy because nobody noticed them. At that moment I understood how great perseverance was for two people who’ve been together forever.

All nerdiness aside, I don’t recall us ever having more than a small handful of arguments, pretty minor over the course of 20 years, and she’s even less boy crazy than I’ve been girl crazy, so infidelity has never been an issue. Some couples act like they’re always looking for someone else, but we never did. As far as I’m concerned Rebecca’s always been the perfect girl for me. 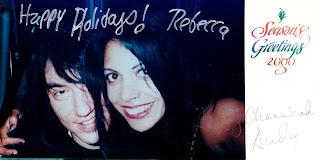 Top photograph by Carlos Serrao.
Posted by Andy 7 at 5:00 AM

Great photos of you two!! Especially love the first one. Congratulations on 20 years, and many, many more.