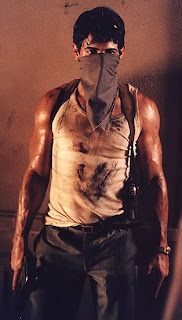 Like a misbegotten remake of Bonnie & Clyde or Gun Crazy, Burnt Money is a romantic crime film from Argentina brilliantly directed by Marcelo Pineyro starring Eduardo Noriega. It's based on a true story about a gang of criminals hiding out in Uruguay after a high-profile heist committed in Argentina circa 1965.

Because the armored car holdup is so high-profile their faces are plastered in every newspaper in South America, so they have to lay low in some beat apartment until they get their fake ID cards. The lovers on the run are a pair of criminals Angel (Noriega) and Nene (Leonardo Sbaraglia),nicknamed “The Twins” because of their close resemblance to each other. Angel has a serious heroin problem and Nene has occasional urges for women. Rounding out the gang is Cuervo (Pablo Echarri), the wheelman, insanely high-strung and homophobic.

The hideout in Uruguay turns into a season in Hell as the gangsters are sitting on millions of dollars with nowhere to go and nowhere to spend any of it. Angel is tormented by his crime and homosexuality, aggravated by Cuervo’s constant taunts, which Nene just laughs off as sheer insane drivel. Although the three hoods have been ordered to stay inside, they rebel by going outside; once to the beach for a liquor-fueled dance to “Surfin’ Bird” with bikini beauties which quickly goes wrong when they start shooting off pistols, and the second time to a local carnival where Nene picks up guys in the rest room and eventually hooks up with the local tramp, Giselle (Leticia Bredice).

In one of their private times together Nene confesses everything to Giselle (while Angel repents in church). When Giselle realizes she can’t replace Nene’s love for Angel after getting kicked out of her own apartment by the gang, she drops a dime on the boys. The police and the militia arrive, culminating in an intense 20-minute shootout with the boys burning all the money (Plata Quemada) and going for broke in a final gun battle.

Pineyro’s direction is simply brilliant, the action never slowing down or appearing hackneyed. There’s enough sex of both stripes flying around (Cuervo’s girlfriend Vivi is particularly memorable), the crime scenes are exciting – edited by Juan Carlos Macias, and there’s enough humor and downright insanity to keep you riveted to the screen. The film utilizes equal helpings of smoldering Fifties-style jazz and early Sixties garage rock (Wild Thing/Land Of A 1000 Dances), and the cinematography by Alfredo Mayo is colorfully dynamic. With three main leads that look like they belong more in a fashion magazine than in a police station line-up, Burnt Money has enough style and crime to keep any film lover happy.

Most religious films will kill you with their stodgy righteousness, but there’s never been a film like Luis Bunuel’s “Simon Of The Desert”.

Originally intended to be a part of a religion-based trilogy (with Pasolini and Fellini) that never saw the light of day, “Simon” is a 45-minute film about Simon, a deeply religious man in the 4th Century who stands on a high platform delivering platitudes about the glories of God. Townfolk flock to his high podium in the middle of the desert to offer him goats and sheep, some are crippled and sick begging for religious healing. Simon is played by Claudio Brook, who I instantly recognized from Santo and Neutron Mexican wrestling pictures as the evil, debonair villain. What a killer resume!

She finally wins as Satan as always does and whisks him away to NYC 1965, both now hipstered out in The Peppermint Lounge listening to a loud, noisy garage rock band belch out a tune called “Radioactive Flesh”. And that, folks, is how you make a movie.

I need to see these movies!

Both films have intelligence, style, sex and humor. Everything that makes movie watching exciting.:)