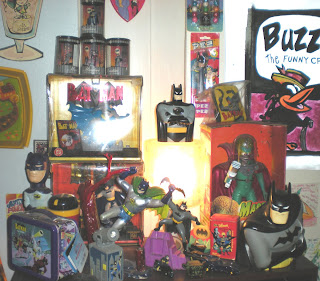 In his autobiography “Back To The Batcave” Adam West remarked that the three pop culture phenomena of the Sixties in America were “Bond, Beatles and Batman”. While I never engrossed myself in the marketing of the first two icons I always had room for buying all the 1966-era Batman stuff I could get my hands on.

A major factor in the Batman TV show’s success can be attributed to the way it was so deeply entrenched in the sonic boom of Sixties teen culture. Villains like The Joker and The Riddler had gang molls that looked more like go-go dancers than Virginia Hill, wriggling like they just jumped out of their discotheque cage, The Batmobile was Kustom Kar Kulture at its wildest, and Batman himself hit the discotheques in an early episode doing a bastardized Watusi called “The Batusi”. Batman showcased more teen hipness than Patty Duke, Gidget, Dobie Gillis and every teen TV show combined. The only show to match it for teenage grooviness was The Munsters, but Batman had one thing The Munsters didn’t have – COLOR.

No matter who the villain was – Penguin, Riddler, Joker, etc. – they never dressed in black, foregoing it for comic book shades of purple, green and hemorrhage red. Batman’s cape and cowl was a cool midnight blue, a visual respite from the dreary black rubber nightmare he’s been draped in for the past twenty years. Next to G.I. Joe no other toy captured my imagination more in the Sixties.

I stayed away from textile based souvenirs like sweatshirts and towels and focused more on the vinyl-based toy media. There was the Batman soaky, a figurine that held bubble bath for dirty kids, the Ideal hand puppet that eerily resembled Adam West, or the vinyl Batman wallet with the brilliant Carmine Infantino artwork. There was the Colorforms art board where you could move plastic cut-outs of the Dynamic Duo around, and the great lunch box which shows Batman and Robin fighting the nefarious Penguin. 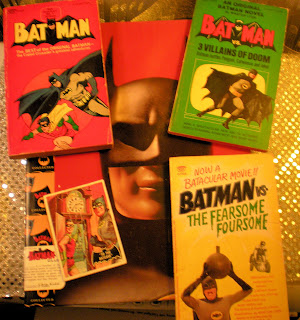 Then there were all the paperback cash-ins, some were silver age reprints and some were cheap novelizations. There was the 3D comic book, again with The Penguin seen fighting them (what’s the deal with The Penguin?). I also owned the View Master of Batman, a portable slide show you could watch, the series showing stills from the great Catwoman episode.

There were all the cool exploitation records I had, like the 45 rpm of The Spotlights rockin’ out on Batman & Robin, written, performed and produced by Leon Russell. There was the “Jan & Dean Meet Barman” album, which transposed Gotham City over Surf City (big surprise!).

Thirty years after the Sixties Batman craze died out Bruce Timm, a former animator from the Ralph Bakshi Animation studio (New Adventures of Mighty Mouse) helmed the Animated Adventures of Batman in 1996 for Fox Television and a whole new onslaught of great Batman merchandise returned. The artwork and designs were far more stylish than its earlier predecessor due to Timm’s brilliant eye for design and excellent makeover of tired and long-forgotten villains (Scarecrow, Clayface, Poison Ivy) and short-lived heroes (The Demon, The Creeper, etc.). 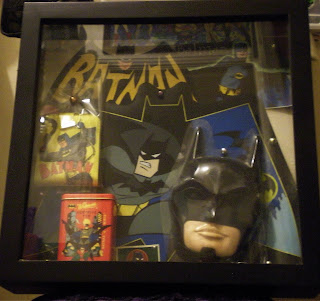 It was back to the toy store in the Nineties to grab all this awesome swag, which included cool figurines, a Bat signal night light, toy Batmobile and Batgirl motorcycle, plus a new Nineties soaky and Nineties lunch box. I hit the Warner Bros. store on an almost weekly basis to catch the latest merch on Batman, The Joker, Harley Quinn, and all the rest.

The ultimate book on this merchandising craze that’s spanned several decades is “Batman Collected” by Chip Kidd, (Watson-Guptil), an eye-popping collection of images and details that doesn’t leave any stone unturned on all things Batman.

There are basically two kinds of toy collectors out there: one, the kind that want bragging rights for owning a collector's item, and two, the kind that love their toys and treasure the memories that they bring. I’ve only acquired the things I really can’t live without and enjoy looking at day after day. Happiness can’t be bought but it can bring a few smiles now and then. 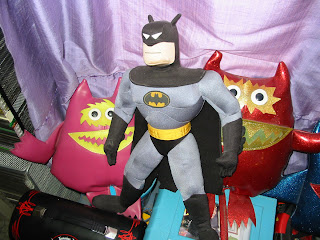