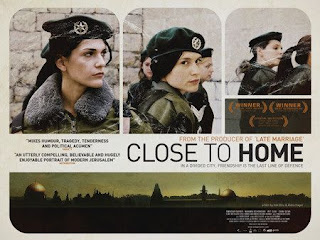 “Close To Home” (aka Karov Labayit) is the story of two very different girls assigned to work together, a plot device normally connected to comedy in the United States, but placed in Israeli hands delivers an ingenious take on the Israeli-Palestinian controversy. The overall tone of the film is hard by virtue of the way the city of Jerusalem is shot, focusing on a landscape of brick, mortar and stone.

Two teenage girls working the young women’s division of the Israeli security corps of the Army are assigned to patrol the streets of Jerusalem. They have entirely different attitudes about their work: Mirit (Naama Schendar) is overly serious and diligent in her work, a little too much so, stopping anybody and carding them. Her partner, the more seasoned and cynical Smadar (Smadar Sayar) realizes that picking a terrorist in the streets is like trying to find a needle in a haystack, so her attitude is more relaxed to the point of delinquency. In several scenes we see Smadar frequently taking breaks at boutiques looking at clothes, goofing off at the hair salon with her hair stylist pals, much to the horror of Mirit.

Because Mirit is assigned as Smadar’s partner she finds herself forced to be a party to these hooky sessions, so consequently they turn in their post-patrol report to their CO, Captain Dubik (Irit Suki), who chews them out in front of their comrades. Several scenes of carding are shown, first on the streets, in a border station where women are strip-searched in front of their children, and on a bus dealing with agitated bus riders, the riders having their backpacks and briefcases searched. You’ll feel annoyed and uncomfortable just watching these scenes, and that’s just the point: security sucks because people are basically just trying to get through the day, until something goes wrong.

And something does: a bomb goes off in the streets and Mirit falls unconscious, saved by a handsome passerby, which is the turning point of the film. Mirit develops a crush on her heroic guy, making her slide into a delinquency comparable to Smadar’s behavior.

MIrit spends more time roving the streets half-inspecting people’s IDs and looking for her guy. When she finally finds him at a café she runs to the ladies room to switch into her street clothes and chat him up. He doesn’t even remember her after she tells him the bombing story, and later on when Smadar goes to his home to get him to visit Mirit in the brig (Mirit fucked up again, believe it or not), Smadar realizes he’s already in a relationship and isn’t interested in even being nice to Mirit. 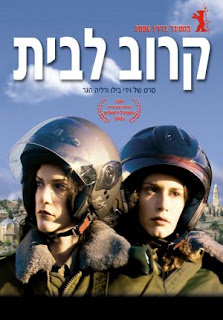 Ironically we find ourselves sympathizing more with flaky Smadar because she’s more comfortable with her femininity and during the film demonstrates a stronger loyalty to her partner than Mirit does. Mirit is all about saying “No” and Smadar is all about saying “Why Not”.

The film ends with a horrific scene where a citizen resents being carded by our two female soldiers, refusing to show them his card. A terrible argument breaks out, and a mob of Israeli men come to the aid of our girls, jumping on the man and beating him unconscious. The girls, for all their training and authority can’t even control an angry mob from beating the man, and the film ends with both girls riding through the streets of Jerusalem looking numb and not even speaking to each other. Unfortunately, the majority of the beating scene is played out just in voice-overs with no visual. Wonder if that was intentional on the directors’ part or it was forced on them. It still carries a strong punch.

“Close To Home” is an intense film that doesn’t offer answers to contemporary problems, but in showing the problems one can almost see how difficult the situation is. Directors Vardot Bilu and Dalia Hager have made an amazing film that brilliantly demonstrates the immediacy of the dilemmas facing security and how it affects everyday people just trying to get by. The principal three actresses (Schendar, Sayar and Suki) are excellent in their roles.

I would still recommend “Close To Home” even if you don’t have an interest in politics, as it perfectly demonstrates the dynamic between two people who have to work together in spite of their differences and still have to learn a thing or two about growing up in this turbulent, uncontrollable world. 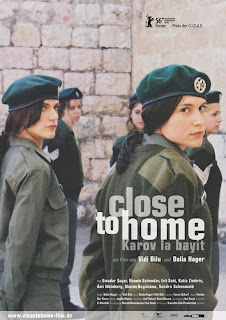 I recently saw Mervyn LeRoy’s “East Side West Side”, and it may be the original “Bob & Carol & Ted & Alice” where everybody ends up pairing at some point with each other. You need a score card to keep up with this one!

James Mason, who’s married to Barbara Stanwyck, gets his flirt on with Barbara’s mom, played by Gale Sondergaard. After a punishingly dull evening with the in-laws James decides to go bar-hopping while Barbara waits for him to come home. He runs into his old flame Ava Gardner, with whom he cheated on his wife with in the past.

Gardner’s new boyfriend punches Mason out in front of Cyd Charisse, who knows Stanwyck personally from the department store she works at. Charisse takes Mason home to medicate him while bragging about her boyfriend, Van Heflin, who’s returning from France.

Cyd asks Stanwyck to accompany her to the airport to greet Heflin. Once he meets Stanwyck, he’s all over her like a cheap suit, completely oblivious to Charisse being in the same room. Stanwyck’s best friend, Nancy Davis (aka Reagan) is throwing a party for Heflin so her husband can woo him into writing for his newspaper. Needless to say, Stanwyck goes alone to the party.

Gardner keeps showing up at Mason’s office and he finally caves in to her seductive charms, because, in his own words, she’s like “liquor to an alcoholic”. While Mason’s guzzling on Ava, Heflin spends all his quality time with Stanwyck.

Stanwyck finally confronts Mason about his tomcatting, so he visits Sondergaard to appeal to her sense of mercy in their relationship. Sondergaard basically tells the previously flirtatious Mason to suck it. When he gets back home we hear that Gardner has been murdered. All fingers point at Mason as the murderer.

Heflin now gets his best detective on, playing a fake drunk act for Beverly Michaels (of Hugo Haas’ “Pick Up” fame). He has a theory she killed Gardner, which is ridiculous because prior to this scene she didn’t appear anywhere in the movie. By the way, at this point Charisse is totally out of the picture, not to be seen from again!

With his name cleared, Mason now gets on his knees begging Stanwyck for forgiveness. Gardner is dead so now he can be the faithful husband she always wanted him to be (!). Predictably, she walks out on him to face a beautiful future with Van Heflin, a man she just met at the beginning of the picture. Women!

On the plus side, any serious student of fashion could learn a thing or two by the wardrobe and art direction of the film, which are absolutely amazing. Every shot looks like it was ripped out of a page from Vogue Magazine. The silhouettes that Charisse and especially Gardner set off have to be seen to believe. Both are mannequin fierce and ferocious! 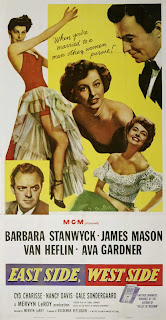 East side West side the clothes are great but the poster is not. I loved watching that movie is was like a bad romance comic.

Saw Close to Home, it's a really good movie. Nothing like Romy and Michele's High School Reunion.