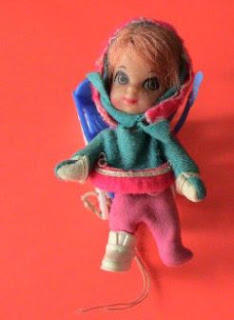 In 2006 I posted a video on YouTube called "Freezy's Big Day". Rebecca took a series of photographs illustrating Freezy Sliddle delivering packages for Santa Claus to all the Liddle Kiddles. I wrote the text to this series of pictures and compiled it for a video on iMovies.

The music originally chosen for the video was The Beach Boy's "The Man With All The Toys", but unfortunately it was too short to pad out the duration of the film, so I had to choose another song. At the time Steve Jones of The Sex Pistols had a radio show called "Jonesey's Juke Box" and he was playing a lot of hoary old glitter chestnuts on his show like Showaddywaddy and Alvin Stardust, but the one that brought back the best memories of Rodney's English Disco was Mud's "Dynamite". Perverse soul that I am, I decided to use "Dynamite" as the music to accompany Freezy's Yuletide flight to help jolly St. Nick to deliver packages to all the kids of Christmas.
Posted by Andy 7 at 5:00 AM