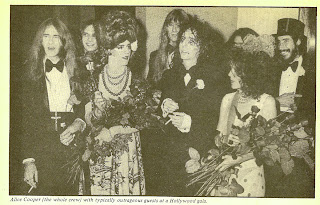 In late 1971 Creem Magazine sent Lester Bangs out to write an article on the raging new rock force that was Alice Cooper, from which these pictures appeared.  It didn't hurt that the band spent a short tenure in the Detroit rock scene - where Creem Magazine was located - sharing bills with The MC5, Stooges, SRC, and The Frost (whose guitarists Dick Wagner and Steve Hunter later joined the band). 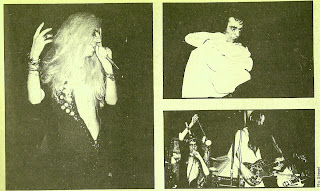 Before Alice became a trailer park rock god he earned a lot of bonus airline points playing the drag queen card, wearing falsies, Dolly Parton wigs and just queening out.  On the right is a still from the legendary "Ballad of Dwight Frye" song where's he's institutionalized in a strait jacket. In the next picture he's doing a bizarre Salvador Dali "Persistence of Memory" routine.  He later met Dali who adored Cooper to the point of creating a hologram of him. 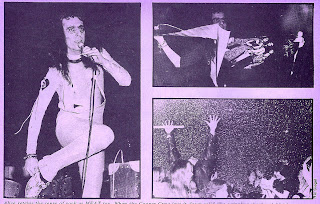 Here's Alice in body stocking and heels to the left, and tearing the poster to the "Love It To Death" album on stage to the right.  Early footage of Alice Cooper performing live can be seen in Frank & Eleanor Perry's movie "Diary of a Mad Housewife" where chickens aren't killed, but pillows are ripped open instead and goose feathers are tossed around in a hail of pflug. 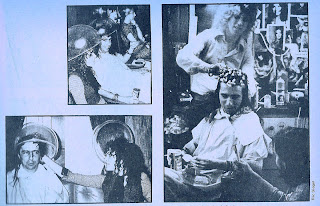 Here's Alice consolidating his queeny image by having his hair done at the beauty parlor.  He also had The Cockettes perform and appear at several events and shows around this time. I think Alice and Frank Zappa tried pretty hard to downplay any drug involvement because they were creepy guys from Laurel Canyon and at the time (1970-1971) every straight in LA thought if you had long hair and came from the Canyon you were Charles Manson, so eventually they went out of their way to brag about how average they were. Too bad. By the time "School's Out" was released (1972) our private party was over. 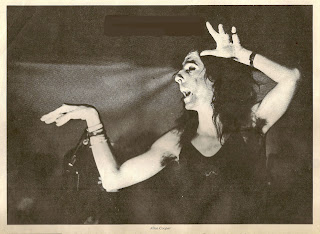 Great stuff!!! The photos wow! Thanks for this one.

Anonymous said...
This comment has been removed by a blog administrator.
September 2, 2013 at 5:33 PM

fantastic pics. I saw them at Fillmore East in '71 at the tender age of 12, had to bribe someone's parents to take me. Just an unbelievable performance that had the audience in a state of near hysteria. Diary of a Mad Housewife does not capture it at all.

For me and my fellow tween outcasts Killer was the end of the private party. Sigh.