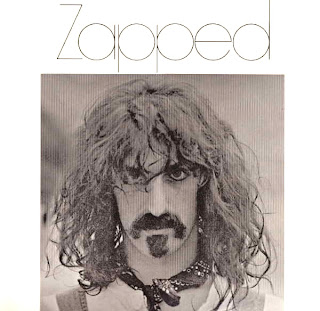 In the late 1960's Warner Bros. Records released a string of promotional song sampler albums featuring their best tracks, some of which were getting heavy airplay on the radio. They usually went for $2 and were in the double-album format. The line-up on a typical sampler would be The Jimi Hendrix Experience, The Kinks, The Beach Boys, Tiny Tim (!), Joni Mitchell, Gordon Lightfoot, Arlo Guthrie, Deep Purple, T. Rex, etc. Not a bad deal for $2, and the artists you didn't like would even weigh in with a track that was halfway listenable. But formats begin to get stale after awhile and Warners began to play with it, releasing a sampler of easy-listening schlock called "Schlagers!" and going the extra mile for Frank Zappa's Bizarre & Straight labels with the best sampler ever (IMO) called "Zapped".

Released at the peak of Zappa's artistic powers and his impressive talent roster, "Zapped" is surprisingly eclectic, from Alice Cooper's haunted house metal (the genre he started), Tim Buckley's jazz-folk, The GTO's baroque minstrellisms, and vintage tracks from the Lord Buckley library. And the beast gores on. Liner notes were annotated by legendary rock critic John Mendelsohn, who deserves his own blog. A rogue critic for Rolling Stone Magazine in the Lester Bangs-R. Meltzer mode, Mendelsohn championed countless unknown British talents like The Move, Fairport Convention, The Kinks (when they were banned from performing in the States), and an unknown cross-dressing singer named David Bowie. He also had a great band called Christopher Milk, and I still own their excellent United Artists Records 7" EP with the gatefold cover. His liner notes are superbly informative.

Side 1 to "Zapped" begins with "Titanic Overture" by Alice Cooper, a solo pipe organ piece that recalls haunted houses and sailor shanties and quotes pop-schmaltz hit "I Think I'm Going Out Of My Head". Creepy stuff!

"The Blimp" by Captain Beefheart follows, a spoken word piece with a jumpy, jolting backing track complete with Zappa-style horns tooting. Beefheart's poetry is a joy to listen to, his affection for funny words ("Shadrach") is in the W. C. Fields tradition.

"St. Nicholas Hall" by Judy Henske & Jerry Yester follows. Frank liked to take hippie freaks and place them in stuffy, patrician settings for deadpan irony. Stilted vocals matched with an equally stilted harpsichord backing, The GTO's also used harpsichord on their album, too. The tuxedos worn by Yester and band on the cover were also employed by Captain Beefheart's band on the cover of "Lick My Decals Off, Baby". Maybe that's where the "straight" in "Straight Records" comes in.

"I Must Have Been Blind" by Tim Buckley is a nice song with some cool vibes backing him. Mendelsohn's liner notes indicate he didn't care much for this music, ha ha.

"Merry-Go-Round" by Wild Man Fischer is one of the earliest records that documented a street singer in his native habitat, warts and all. Many, many warts. This track features backing from the Mothers of Invention percussion section, Art Tripp III and Jimmy Carl Black.

"Refrigerator Heaven" by Alice Cooper comes from "Easy Action" and has a great Syd Barrett-style song construction with rabid guitars that play horror movie melodies in unison like some demented string section. And Alice's vocals rule the track. I love the final lyric, "I won't come back until the sun sets down on the moon".

"Little Boy Blue" by Tim Dawe is a surprisingly poppy folk track, catchy as hell. Tim Dawe was a founding member of The Iron Butterfly (!). The lyrics are very funny, too. There's mention of a woman dressed in black and busting out her whips. S&M folk? I love it.

"Governor Slugwell" by Lord Buckley is his version of a radio broadcast of a Gubernatorial fat cat's rally, with Buckley playing all the characters. His ear for people's voices is hysterical; the Irish cop, the crotchety politician hemming and hawing, perpetually clearing his throat, and tops himself with the Sun Shining Negro Drum Corps ("WHAM! PAM! WHAM! PAM! WUBBIDYBUBBIDYBOO!")

Side 2 to "Zapped" begins with "Lucille Has Messed My Mind Up". Jeff Simmons was a Mike Bloomfield wanna be who played acid blues, and this track is great, featuring superb backing by The Mothers (who he would later join), and an even more superb Zappa superfuzzed-out guitar solo.

Captain Beefheart returns with "Old Fart At Play", another spoken word track which I find rather odd. There are better tracks from "Trout Mask Replica" that feature his wildman singing. I would have picked "Ella Guru", "Moonlight On Vermont", or at least "Ant Man Bee".

"Holiday In Berlin, Full Blown" by The Mothers of Invention follows, one of the airiest and prettiest compositions ever recorded by Zappa and his colleagues. It always puts a smile on my face, even the boozy "Thanks For The Memories"-sounding 1940's Big Band sax break.

"Circular Circulation" by The GTO's is a country tune about some outlaw called Muddy Guts. It's probably the most tuneful song on their album sung by Miss Pamela (she struggles quite a bit on it). The GTO's were really getting into country at the time because some of them were chasing The Flying Burrito Brothers, the only glam country band in recent memory. Loved those Nudies outfits, boys.

Of course the album ends with Frank Zappa and his swinging "Willie The Pimp", vocals by Captain Beefheart and wild electric violin sawing from Sugar Cane Harris. Anyway, I'll let Mr. Mendelsohn have the last word in his brilliant liner notes, who had this to say about the late Frank Zappa:

"Finally we come to the creep who started it all, the man who keeps digging up these perverts and encouraging them and producing them and foisting them on a defenseless public that he's rendered a pushover with his wild eyes and intimidating wit.
"What can one say, except that we have him to thank for opening up virtually countless areas of popular music and for infusing what we sometimes refer to as rock for lack of a more explicit term with the self-effacing wit that enabled it to survive as long as it did".
Posted by Andy 7 at 12:22 PM

So glad you posted this! My older brother sent off for a copy of this when I was ~13, and it was my first introduction to Frank's body of work. I especially remember loving Holiday In Berlin, Full Blown and acknowledging that rock music doesn't have to categorically suck. I also remember being gobsmacked at how the splendiferousness of Willie The Pimp just went on and on, with crashing waves of unending beauty enrobed in a wah-wah pedal.

Some of the other songs were OK, too.

Thanks for the cool feedback!

I love reading this blog. I was obsessed with comics and remembered all the wild ads.
Nice to know somebody actually bought the records from the comics.

Mailed in my $2 back in the day. I was already into The Mothers but discovered Beefheart thru this sampler. My teenage brain was never the same...