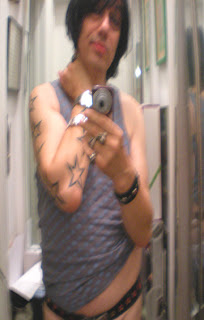 It was sometime around 1978-1979 when my friends The Alleycats were playing the Whiskey-A-Go-Go opening for a new band that was touted as The Next Big Thing from Australia, AC/DC. I entered the club during a highly shrill guitar solo that sounded constricted like tight underwear, reflecting neither joy nor freedom. I walked up the balcony to sit down when a fat, beefy guy yanked me by the arm, tearing the sleeve of my jacket.

Directly behind me was a skinny guy who looked like a circus geek bobbing his head up and down wildly playing a guitar, spazzing like a bulleted wolverine. He had his ass up in the air like Jeff Stryker taking a big one and twitched down the aisle with Oz Fuckface Roadie shoving nightclubbers out of the way.

Twitchy the Circus Geek finally got back on stage and the band finished their rhythmically uptight set. As soon as they left the stage some guy on the dance floor yelled, “Fuck Australia!”
He turned around and some bruiser punched him in the face, cold-cocking him with a nauseating crack you could hear all the way to West Covina. It was the first time I’ve ever seen anyone knocked out cold. That motherfucker sank right to the floor.

Rebecca’s played “ Grey Gardens ” about 100 times, so I figured if she enjoyed Little Edie Beale’s ravings and mad dance skills the time was right to pull out “Andy Warhol’s Heat”, which she’s never seen. “Andy Warhol’s Heat” gives more Beale for your buck: just about everybody in it’s as scary as The Beales: Pat Ast, Eric Emerson, but the Grand Prix winner is Andrea Feldman. Rebecca is now obsessed with the insanity that is Andrea Feldman and her bizarre vocal inflections. “I wannnnnna be ahhhh lezzzbyahhhhhnnnn”.
“Maaahhhhthahhhh give me suhmmm muhhhnnnny”.
For the next three days she marched around the house imitating Feldman like some demented parrot. A suicidal speed freak parrot. “Jooooeeee, fuchhhck meee!”
The next thing you know my arm got twisted into renting “Andy Warhol’s Trash” so more Feldman hijinx can be enjoyed, even better in “Trash”, possibly the only low-budget movie Rex Reed has ever lauded as a masterpiece.

Poor Little Edie, in our household she has been dethroned by the magic that is Andrea Feldman. (Holly Woodlawn’s no slouch either!)

The times are a changin’ at Rock & Roll Ralphs. Once earning that name for being located on the Sunset Strip within close proximity to the Guitar Center and other Heavy Metal havens, it was also within spitting distance of many strip clubs like the Seventh Veil where Metal dude girlfriends earn their keep stripping for their boyfriend’s beer money. Many was the day when Metal dudes would shoplift steaks by sticking it in their rotting leather pants. Those days seem to be long gone, as evidenced by the last few visits I made shopping for groceries.

The Quiet Riot types have been replaced by angry models, that’s right, angry models. I’ve never seen so many beautiful couples in my life, the type that model for underwear adverts to pay for their Brie. It’s amazing, picture yourself leaning over to grab a bottle of water, when a Guess Jeans couple cut in front of you burning stink eye as they grab the bottle you were reaching for. You would think with their astounding good looks they would be a little happier or mellower, but no, they’re irritable as fuck.

Note to mannequins: attitude’s a major part of beauty, not your chiseled features. Douchebags.
Posted by Andy 7 at 2:20 PM

The blog about retirement was the most unpopular piece I've ever written. I guess getting old isn't a reality in some folks' minds.