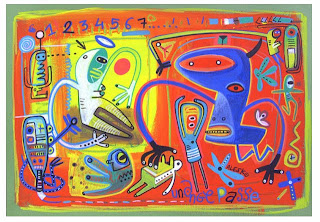 Let's face it, like it or not, people will always have favorites in everything. The image-driven website Flick*r is no exception. I have five favorite artists on Flick*r who easily reign supreme above all the others, and I'd like to talk about them this week. In no particular order, they are:

1. Atelier Alesko (France): Completely original art, stoner art but way better because it has direction, his art is childlike but complex, colorful like Haitian art and actually flows with rhythm. Every piece is different than the last one - he always keeps you guessing.

2. Richard Mullins (Oklahoma): Gallery Director of the Blah Blah Gallery and a fine painter in his on right, Mullins' work is a wild cacophonous mish-mash of colors with an insane figurative busting into the foreground. Figuratives range from an organ grinder's monkey to Kermit The Frog to a kid with a paper sack over his head. His range is pretty darn wide, too: I think his best painting is the one of a faceless woman playing electric guitar. 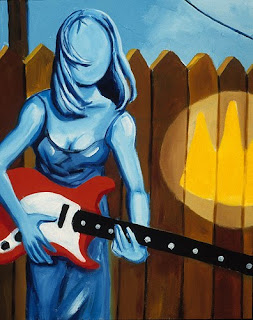 3. Kittytown (California): Megan Gray aka Kittytown creates woodcuts that foil the current fever of big-eyed doll paintings (Mark Ryden rip-offs) that are so trendy these days. Gray's work is naive but has an almost early 20th Century romanticism added, where the sentiments are sweet but funny-weird like old Dick Powell numbers from the Thirties. 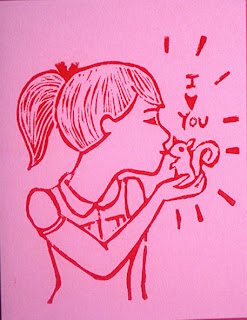 4. J.R. Williams (Oregon): Legendary comix artist who has a pretty funny photostream. His work actually had a Flick*r censor filter blocking his pictures because he likes to draw topless pictures of Penelope Pitstop, Wilma Flintstone and Sling Rave Curvette. He's hardly an unknown but his notoriety on Flick*r would almost rate a legend in itself! 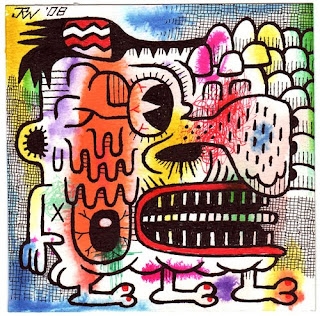 5. Gregg Griffin (Oklahoma): Another member of the Blah Blah Gallery, but what makes him so awesome is his obsession with painting thousands of portraits of Batman acting psycho and yelling his head off at The Joker, punching Robin the Boy Wonder and scaring vampire bats with his bad breath. Frank Miller wishes he could portray The Dark Knight in such a brilliant fashion. Christian Bale take notes! 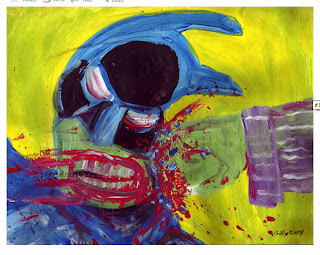 I wouldn't classify myself as a naive artist. . . I do have formal art training and I am able to paint and draw realistically. I choose not to as a deliberate aesthetic and emotional choice. But thank you Andy. I'm glad you like my stuff.

The woodcut looked juvenile. No story no point of view no style.

JR Williams is giving me an acid flashback.

Even though I am not a fan of all your choices, I love your range.