The Greatest Book Ever Written 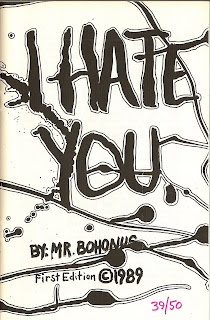 Back in the day when I actually cared about having a band and brought guitarists on board this wonderful guy from Tempe, Arizona joined my band. His name was Mikhail Bohonus but liked to go by the name Mr. Bohonus, just fine with me. He looked like a punk rock Gary Cooper, almost seven feet tall and thin as a rail. He never did drugs or drank but he smoked like a chimney and chugged Big Gulps like a demon. All those sugary soda drinks made him act like a speed freak, hyper to the max and constantly imploring me at rehearsals to write new songs on the spot. "Come on, let's wrote some new stuff" - A.D.D. musicianship at its most scary, and good luck writing with him because he'd break into these rapid Robert Fripp guitarisms, surprisingly not punk rock so we never wrote shit together. He wrote the guitar line to "Phantasm III" but I had to harness it to a rhythmic booty shake so girls can enjoy it.

What Mr. Bohonus did better than anyone else was write and put out his own demented chapbooks. Screw that old whore Henry Rollins, this was underground writing at its finest. His short prose collections "Green Piss" and "Orange Donut With Sprinkles" were wild collections but he really hit his stride with "7 Steps To Hell", a collection of Jack Schick cartoons with obscene captions replacing the original holy roller sermon Schick schlock.

His magnum opus and my vote for the greatest book ever written is a genius work of art called "I Hate You", which sports a black cover and no title because the hate is real. This masterpiece is a scant twenty-six pages long, bears no punctuation or capitals and is a veritable Mobius strip of hate. The book begins with, and I quote: "you suck and i hate the fuck out of you and i want you the fuck out of my neighborhood you slimy sick excuse for rotting flesh that you are and you are too because thats all you fuck is rotting flesh your mother was a fucking corpse anyway and ill with countless sexual diseases because she got them from making it with the trash that your kind do it with and you live like a slob you dont even flush your toilet or use deodorant so you smell like the crack of a bums ass the kind your sister licks at lunchtime to get her nourishment at least when she isnt near a dirty scummy toilet she can lick and chew on the lumps of toilet paper that are filled with hard peanutty lumps of poop and thats what makes up her brain cause she is stupid and drives a really shitty car the kind they use in maaco commercials..." Blow me, Lydia Lunch. You wish you were this radical.

Let's fast forward to Page 6: "...get the fuck out of here i am going to rip you to pieces and cram them down the sewer so the rats can eat you and shit you out of their asses because you are a rats ass and rats shit and its what you deserve today right now you lazy fuck go die get leave and go stick your fat head on a railroad track so it can get squashed or i will nail you to the front of a semi truck and drive it over a fucking cliff you son of a bitch..." No screaming caps, no exclamation points, all subdued but pissed lower case. Genius.

Page 15: "...you are a walking comedy you are so dumb stupid and pathetic you dont even know how to play candyland and even if you had candyland the company who makes it would find out cause all of a sudden all the other candyland games would stink when children opened them up the company would take it back from you and slap you in the face for even thinking that they made the game for you..."

The greatest book ever written, and if you don't agree with me, "...i hate you the gods even hate you especially zeus he is just aching to pump countless bolts of lightning into your ass he will bring back to life every roman gladiator and they will slaughter you one by one over and over yes it will be a glorious undertaking the klingons will have their turn too and so will everyone else that has ever lived in fiction or nonfiction they will pay me huge sums of money to get a chance to destroy you and i will have a penthouse and women and you name it motherfucker i will tear you and punch holes in your tongue with an awl ya baby..." Nobody ever wrote a book this good, and no one ever will.

P.S. Mr. Bohonus currently lives in Seattle, Washington and has an Alec Empire-type electronic band called Warworld, a sort of musical counterpart to "I Hate You", abrasive and A.D.D. to the max. 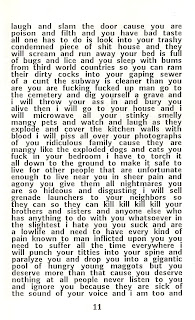 Brilliant!! Where can I get this book!?

I don't know if it's on sale, but when I see Mr. Bohonus I'll ask him if there are any copies still around.

I was just looking over my copies of his works, Green Piss and Orange Donut with sprinkles. Mr. Bohonus has marked me deep and influenced my teen years remarkably.

Man, I used to have this book. I agree, one of the best books ever. There's gotta be a way to get another copy...